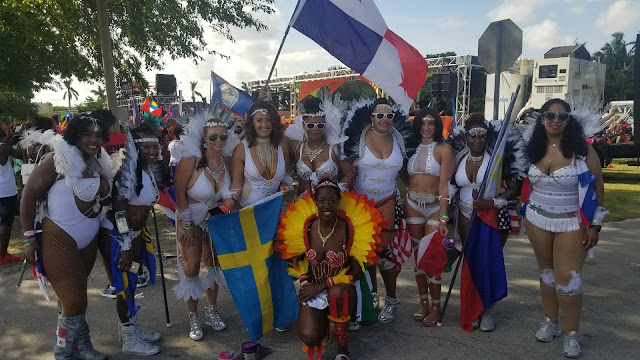 Back to MIA for carnival, I’ve said it before and I shall say it again, Miami is my 2nd favorite US city and it is my favorite US carnival.  The carnival road march leaves a bit to be desired, but this carnival weekend is where I see the most long lost faces.  I run into so many friends that live in other cities that I rarely get to see. Also, I get to meet all the awesome people that I follow on social media and feel like I actually know them.  #StalkMuch??? It’s a weekend jam packed with love and good vybz!!!  My chica Amber from Cali joined us to celebrate her 40th so that made it even better.
The weather forecast for the entire weekend was rain rain rain, but if you recall Miami Carnival 2016 started with a hurricane and we actually flew in early to arrive before the hurricane since flights were being cancelled.  Because of the rain our Thursday afternoon fete of TJJ Arrivals got moved from its rooftop pool location to the indoor location used in 2016.  We were having a grand time until the power went out around 10pm, it was beautiful to see everyone decide that WE JAMMIN STILL and just start singing and banging on whatever they decided would make a good instrument.  We all left in very good spirits despite the situation. 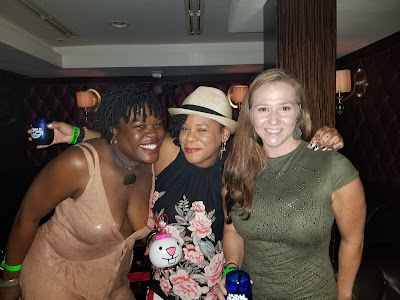 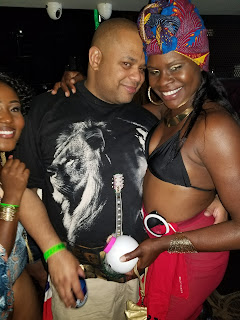 After Arrivals it was off to Tribe Ignite which relocated from Ft Lauderdale to downtown Miami. Perfect for us cause driving back and forth to from Miami to Ft Lauderdale all weekend E-No-Easy… not the way we drank!!!  I don’t know how we managed to not take any pix at Ignite, I guess cause by then everyone was messed the *BEEP* up.  Luckily I am a very good artist and I drew a pic of the evening.
Friday morning, while all the young people went to their early morning breakfast fetes and boat rides, us old people drank champagne on the condo balcony. My carnival schedule use to be like Drink, fete, drink, fete, sleep (repeat)… now its more like Drink, nap, drink, fete, drink, sleep (repeat). Judge me if you must, but I be tired and my back hurts and my knee squeaks. 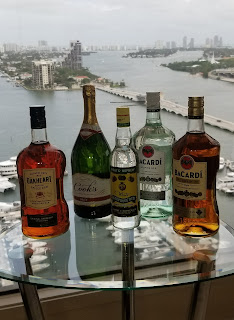 Friday afternoon it was Scorch _uck Work, the location was pretty cool because it was a covered rooftop so you got the awesome rooftop vybz, but you were also protected from the elements.  We had a mutha frekkin blast at Scorch, the place was ram packed by the end, we had to leave a tad bit early cause Paco had to go pick up his jouvert packet and carnival costume.  Once again, while the young people hit the Friday night fetes, our old asses were drinking by the pool and were in bed at a reasonable hour. 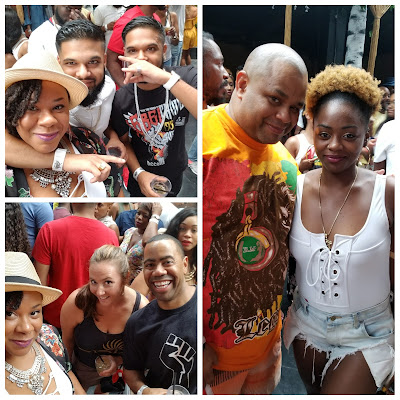 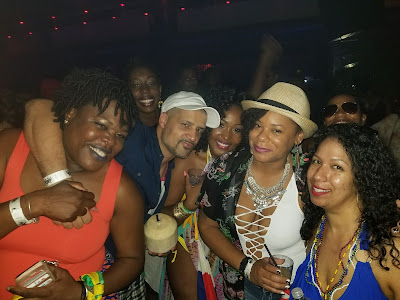 Saturday morning was my favorite event of the entire weekend JOUVERT!  Paint, powder, water, and this year FOAM!!! The thing I love about jouvert is that you put absolutely no effort into your outfit and have still have the time of your life.  Jouvert is the ability to get dutty dutty dutty and set your spirit free! 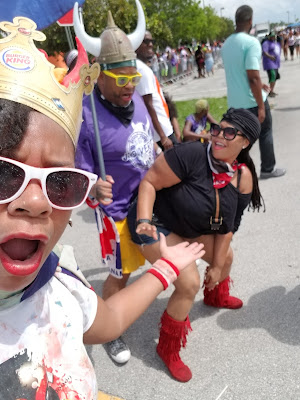 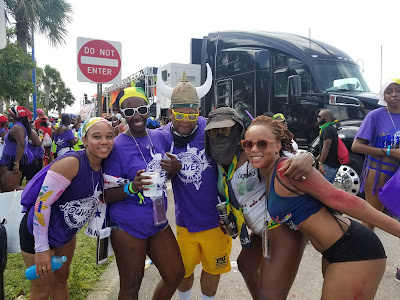 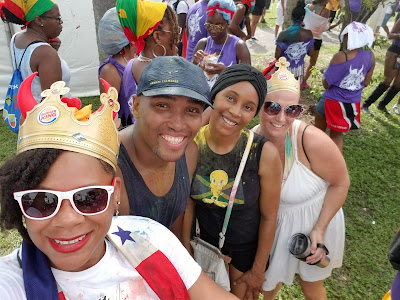 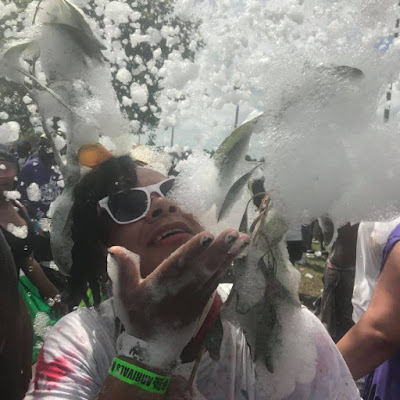 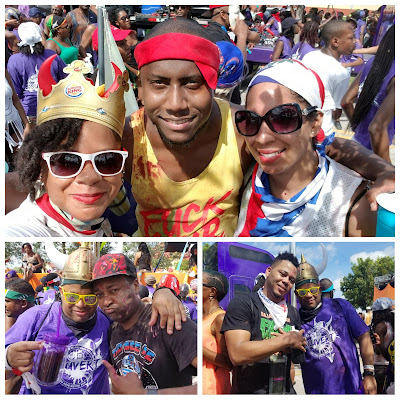 Saturday night we headed to Caesar’s Army Mai Tai. Oh gosh we were loving the open bar, FINALLY we didn’t have to sneak our flasks and we could drink as much as our hearts desired.  A couple of artists touched the stage, but honestly I don’t remember who. I just remember being so happy that they granted us an extra hour at the end of the fete. Can I get a YAYmen? 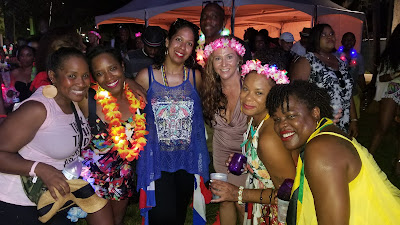 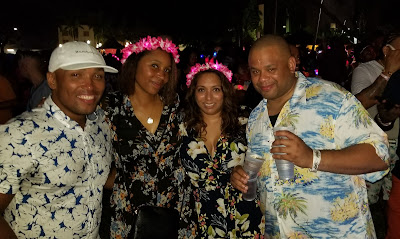 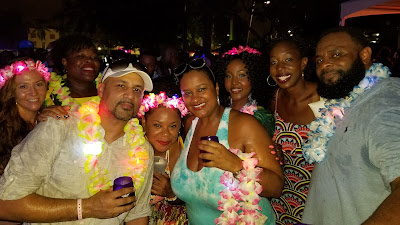 If you have followed me for a while you know that I have been storming Miami carnival for several years (storming = not joining a band, just being a renegade, doing your own thing). The current route gives me the blues, its just too congested! I really miss the days of parading through the streets, so I’m not really that motivated to join a band.  Oddly enough through the years more and more of my friends have been motivated storm with me.  Keep in mind, I don’t make their costumes, they all do their own thing in this “Stormers International” band #WeAintShit  This year “Stormers International” had a common theme of white costumes.  When I look at the photos all I can do it laugh and say SERIOUSLY #WeAintShit!!!  We kinda look like we are a real band. LMFAO 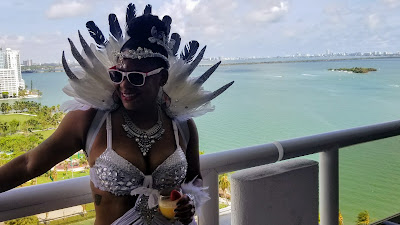 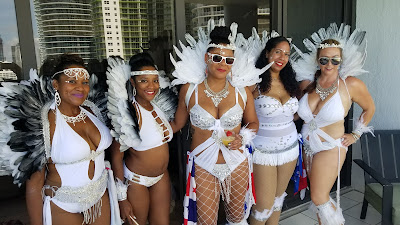 Some of the other stormers stopped by and we had a pregame fete / photo shoot at the condo.  Around 1pm we headed to carnival and linked with the other members of Stormers International & we danced and drank our lives away until 8pm on the DOT.  Why 8pm?  I dunno, that’s just the time we decided years ago that we would be exhausted and head home.  So upon arrival we tell each other, if you lose yourself, if you lose your phone… just be back at the car at 8pm and yuh rass won’t get left! 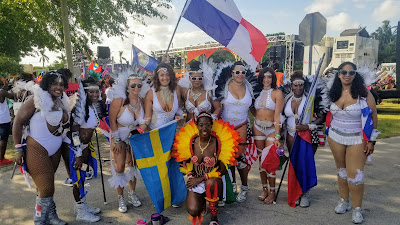 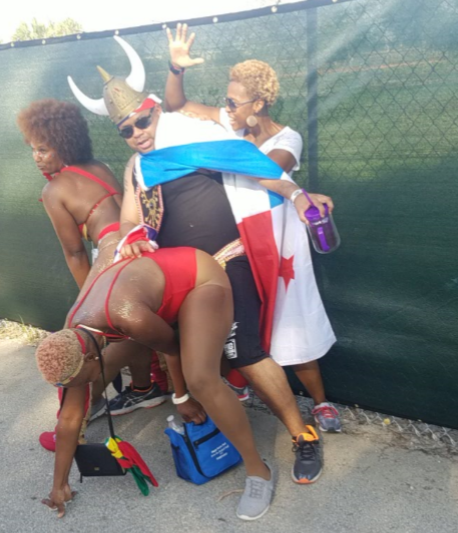 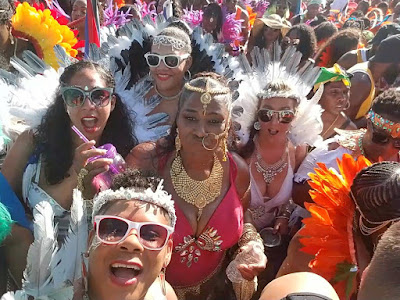 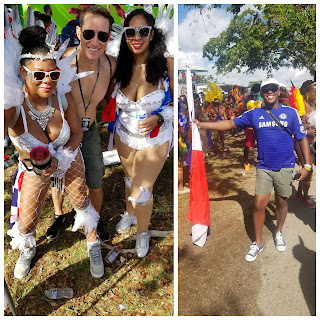 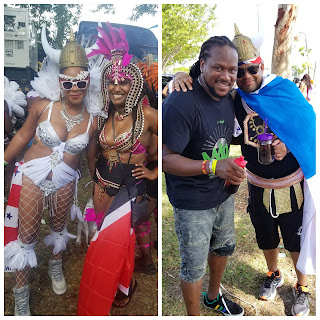 Many many moons ago we used to go to Socavivor/Jabba Strikes Back Sunday night after carnival, but those days are long gone.  Amber went to the lobby bar to watch football for a few hours. I saw Paco on his laptop probably doing taxes or random equations, I however slipped in/outta coma all night.  I actually woke up around 12am and searched through all the channels trying to find Saturday Night Live, took me a while to figure out that it was Sunday night...  I had some champagne and then went back to bed. 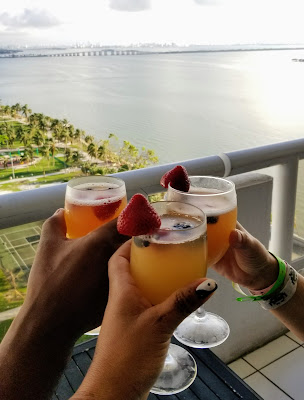 Monday morning while the young people were on their boat rides and whatnot we drank champagne on the balcony in proper old people fashion.  Had to my stop at Fat Tuesday Monday afternoon cause I can’t hit Miami and not partake in some delicious Fat Tuesday, afterwards headed to Scorch Bacchanal Beach on the Virginia Key Beach.  Sadly some of us were flying out Monday night so we didn’t get to go ALL IN, but I hear it was a dayym good fete.  We did however have a fabulous photoshoot on the beach and that my friends is all that really matters! 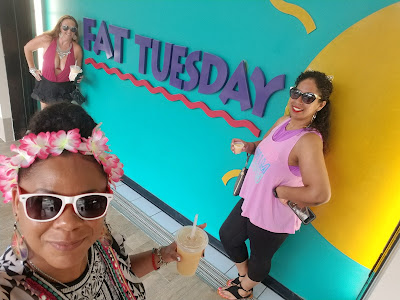 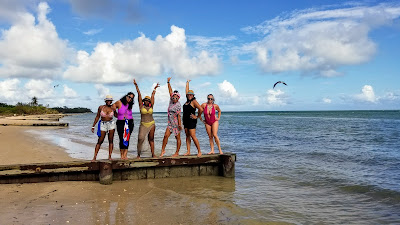 All in all, I had a blast all weekend.  I realize that maybe I should get a lil more fetes in and a lil less drinking on the balcony before I get REALLY get old and cant do it anymore.  So next year I think I will throw in ONE extra fete into the schedule.  Until we meet again my beautiful carnivalians! *MUAH* PS: No video cause I'm lazy!
By AngelaPanama at October 20, 2017