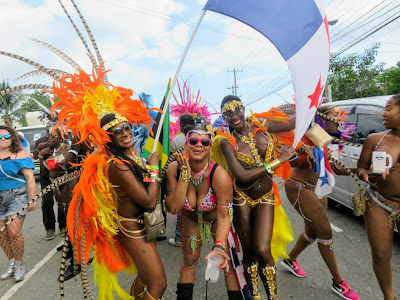 This is my 5th year attending Jamaica carnival and I must say it has changed tremendously.  Not that it is a bad thing, change is good.  Back in the old days (lol) there was only one fete per day and the rest of the day was spending liming by the hotel pool. Now there are endless fete options, back to back fetes, fetes times conflicting with other fetes, and some argue that the Trini’s promoters are taking over.
The influx of new fetes inspired many including myself to fly in earlier.  We opted to head to JA on Wednesday instead of the usual Thursday roll out.  So we landed Wednesday night and straight off the Jumbo Jet like Bunji said, we headed to I Love Soca cooler fete.  The best thing about cooler fetes is that they are CHEAP!!!  These kinda fetes help balance the cost of the all-inclusive fetes although honestly speaking, the all-inclusive prices are not bad compared to Trinidad carnival fetes.  I Love Soca was VYBZ!!  There were like 10 DJs on rotation just playing every dayym thing you wanted to hear.  The venue was spread the hell out so even tho there were thousands in attendance, you weren’t cramped or left feeling over whelmed.  It was held along the water so if you needed a moment to get your life together, you had a beautiful backdrop to sit and do so. There were also several food vendors on site which is a must when the booze are flowing nonstop. 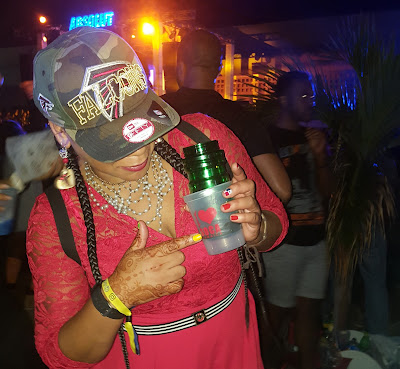 Thursday morning I got to work assembling collars. Yeah we could pay $$$ for the collar that goes with the costume, but making my own $20 collar with love is twice the fun. (1)  That's more $$$ for rum (2)  It gives me a tremendous amount of joy to pass the carnival love onto a little future masquerader. 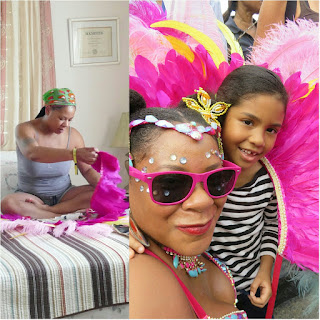 Early Thursday afternoon was costume pick up and AMBUSH pick up.  UUGGHH why must costume pick-up be so painful, although I must admit that it was slightly less painful then previous years.  I seriously need to sign up for a concierge pick up service next year, I coulda /shoulda been chillin at the Spanish Court new fancy pool instead.
Thursday afternoon was the AFLOAT “drinks” inclusive boat ride. There variation of cooler fetes, drinks inclusive and all-inclusive fetes helped keep the trip affordable.  AFLOAT is where I ran into the most homies, maybe that’s why this was my one of my favoritest fetes of the weekend.  Or maybe cause it was the 3 floors of people having the time of their lives??? Although AFLOAT was only drinks inclusive they had small food platters before we boarded and Caribbean Soup after we exited.  Nothing worse than a bunch of mofos drinking nonstop with no food in their tummy, so kudos to the promoters for understanding this. We usually go to Blocko on Thursday night, but we decided to just get tore up from the floor up at AFLOAT and go to sleep. Good call because I woke up Friday morning feeling like a million dollas, ready for the morning all-inclusive boat ride. 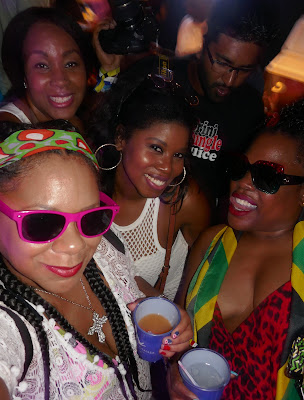 Friday morning was the Candy Coated boat ride and I must say Miss Candy Coated knows how to throw a proper fete for the days that I’m feeling fancy.  She brought the vybz and right amount of amenities that make people feel like they are part of an EXPERIENCE (if that makes any sense, hard to explain).


Friday night we headed to Scorch _uck Work. It was a frekkin monsoon outside, the rain had no mercy for the carnivalians just tryin to fete their lives away… but like the song says, ‘We Jammin Still!”  Despite the weather, the venue was RAM… jam packed, actually slightly too packed.  I can only imagine how much worse it would have been if the weather was nice, but the homies set up shop in a lil corner and still managed to have a good time. 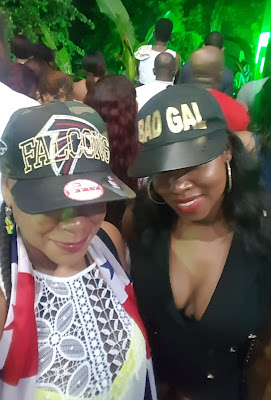 Slept for a few hours and then headed to Caesar’s Army AmBush at 4am.  If you know me, you know I LIVE for jouvert.  Stink and Dutty Life!!! Doh ‘fraid!!!  As much fun as I had at other fetes, I would be lying if I didn’t say that AmBush was my favorite fete of the week.  Jouvert trumps everything, every time!!! There isn’t much about AmBush that I haven’t said in every other blog. I got my WHOLE life in di bush! 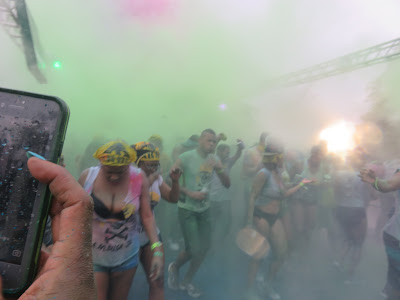 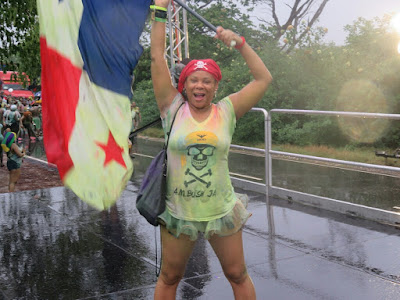 The other homies headed to Sunrise Breakfast fete after, but I took my azz to sleep so I could deal with my flag pole issue later with a sober mind.   What flag pole issue you ask?  Well I have a flag pole (PVC pipe) that attaches in pieces so that it can easily fit into my carry-on bag, but upon arriving at jouvert and waiving my flag, I realized it was too short and I apparently left a piece at home… that just won’t do for the road march.  So off to the hardware store I walked in search of small piece of PVC attachment.  The hardware store laughed at my request for a threaded PVC pipe that would screw into my attachment, guess that’s a 1st world problem. They sell PVC, but it doesn’t screw into jack sh*t!  So f*ck it, I bought an 7ft PVC pipe and am sure I looked CRAZY walking home with it, through the afternoon monsoon with my head buried in the umbrella I had to purchase on the way out of the hardware store.
Bazodee was Saturday night, the usual upscale fete thrown by Frenchmen in the posh neighborhood of Cherry Gardens. The rain came back, but we were prepared with umbrellas this time.  Frenchmen definitely know how to throw a fete.  Endless bars all around the venue so you never have to wait for a drink. Endless tents of food from around the world so you also don’t have to wait to grub.  Of course your favorite artists bless the stage along with your favorite DJs. 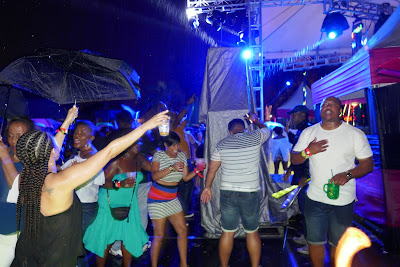 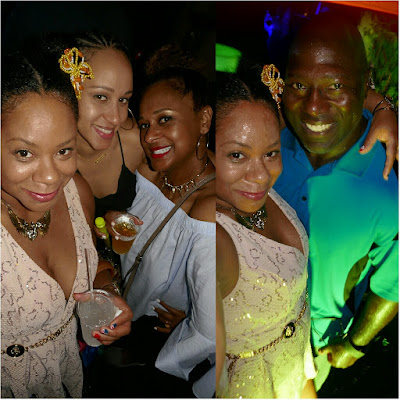 Ima make a confession because I’m amongst family, I was at the bar at Bazodee in my own little world a(s I usually am) and DJ Private Ryan tapped me on the arm to say hello as I walked by. Now this is gonna sound crazy cause I live in Atlanta and I see celebrities on a regular basis, like seriously its nothing to like run into like Usher at the Dollar Tree or whatever (ok bad example).  So I was seriously star struck when Ryan tapped my arm. I’ve been a fan for years, we’ve met like ten trillion times, but I can’t honestly expect him to remember everyone.  Needless to say I was honored and flattered. *I'm corny, my bad* 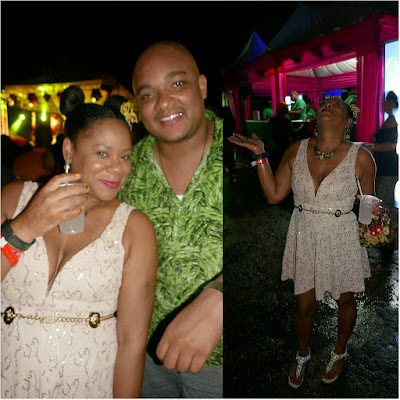 Sunday morning was the road march.  The thing I thought was awesome about Bacchanal Jamaica in previous years is that there was ONE route so it made it easy to find the band.  This year brought two new bands that took their own route, so it made things a bit more confusing when trying to find the band. I can’t say whether the addition of two new routes is a good thing or bad thing… change is good right???? There were a few people that I didn’t get to see or get carnival pix with because they were on a different route.  In the end we all still had the times of our lives and that’s all that really matters.  My costume was beautiful and I will be rocking it again when I storm maybe Caribana or Miami Carnival *Muahahaha*  Didn’t make it to Last Lap this year, got to the road march around noon and around 7pm Di Liquor Conquer We and we called it a night. 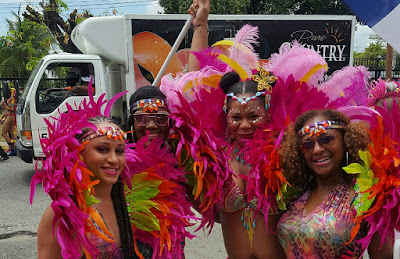 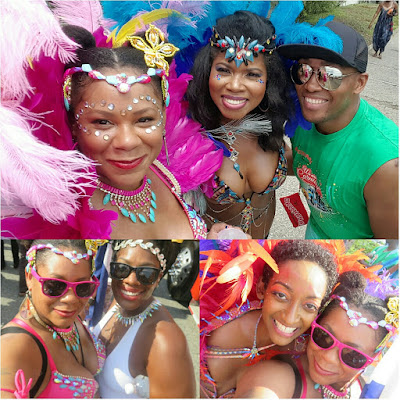 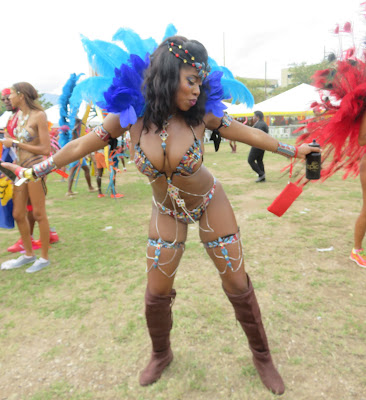 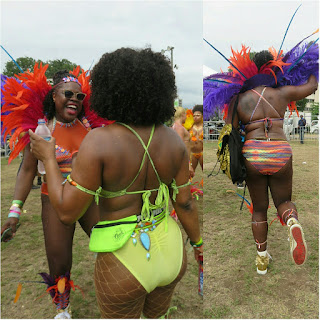 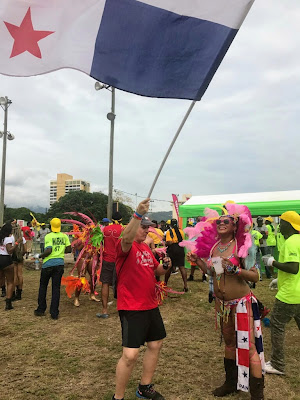 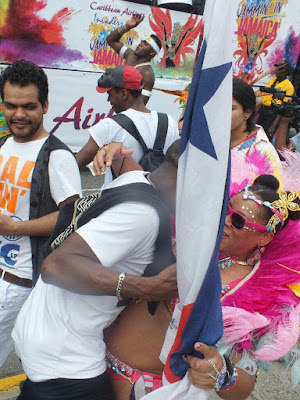 Monday it was back to the real world *dry cry*  I was just wanna end with one side note . Caribbean boat rides are a funny thing. No disrespect to the promoters cause this is just how it goes in the Caribbean world.  They give you a boarding time and a departure time, but you don’t actually start boarding until like 30min after the departure time.  To know me is to know that I am a very punctual person, Caribbean people and their time skills just drive me crazy sometimes. It’s all love tho!
So in the end, Jamaica still remains my 2nd favorite carnival.  FYI the date for Jamaica Carnival 2018 is April 8, 2018 (road march date).  See you there *wink*

Of course I leave you with a quick recap video
SALUD!!! 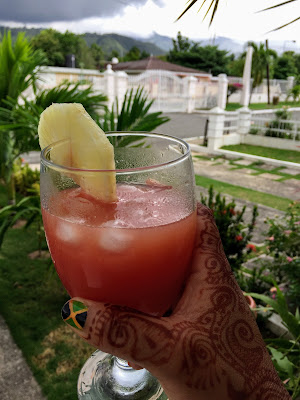