Return to the Motherland aka Panama

My brother Paco and I went home to Panama during carnival, but I can’t really call this a carnival blog because we didn’t partake in many carnival activities.  Let me start off by explaining how we ended up in Panama during carnival season.  For the last 6 years I have been saying that I was going to skip Trinidad carnival the following year, not because I didn’t enjoy it, but because it is mutha frekkin EXPENSIVE… but year after year I returned.  I just couldn’t sit at home and watch carnival videos and pix without slitting my wrists.  There is one thing in the world that I love more than Trinidad carnival, so Paco and I opted to go home during carnival season instead and save ourselves a few thousand dollars. We both brought our kids with us, my daughter hasn’t been back since I sent her to Panama for the summer in 2014 so she could get reconnected to her roots cause she was getting too STUSH for my liking. 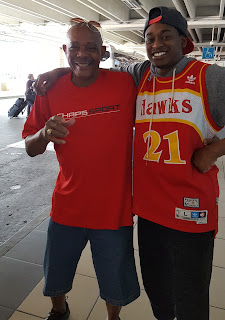 As always, my dad picked us up from the airport with some KFC with magical Caribbean spices that you just don’t get in the US (I actually never eat KFC in the US) and of course some rum and beer.  I also almost never drink beer in the US either, but they love it in the Panama so that’s what was in my hand most of the time.
Although most wouldn’t know it, Panama actually has a pretty huge carnival, just not in the parts of the country that we were visiting, they are held in the interior of the country.  So many family members to see, so much shopping to do (for all the comforts of home that we can’t buy in the US) there really wasn’t much time to partake in carnival festivities and I didn’t mind one bit. 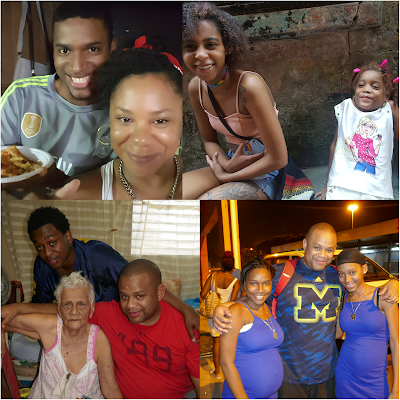 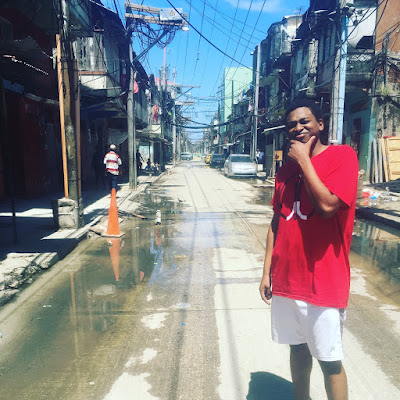 We spent the first 4 days in our birth city of Colón.  Colón is the city that Panama forgot, it is in such disarray, it’s quite disheartening.  I hear that there are plans in the works to revitalize the city, some good and some bad (in regards to those that are currently living there and will be forced out of their dwellings). Word on the street is they plan to quadruple the size of the Colón Free Trade Zone. As mentioned in a previous Panama blog, Colón is home to the Colón Free Trade Zone. The 2nd largest free trade zone in the world. Endless streets of duty free shopping.  Although there isn’t much else to see in Colon, cruise ships make a stop there so the passengers can shop their lives away.  Man o man the things that I would buy if I had a way of transporting them to the US, including a fancy car for the LOW LOW. 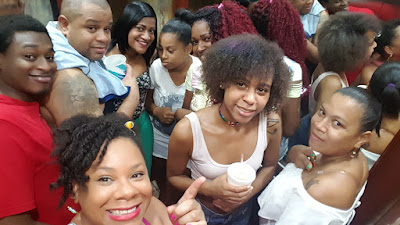 We wanted to take the kids to the beach, but there just wasn’t time. Panama has some beautiful blue beaches, the kind you dream about when you are daydreaming about your vacation sent from heaven.  Although Colón is surrounded by water on 3 sides it lacks a proper beach because it is along the Canal. 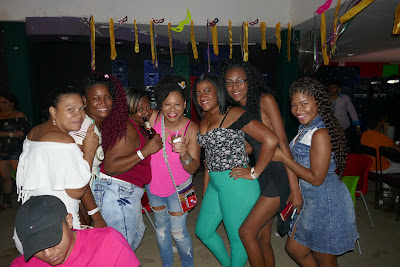 I have this tug a war every time I go home, I want to spend the entire time in Colón, chilling with my family, but I also want to explore my country in tourist mode.  Our time in Colón flew by and we didn’t do anything other than chillax and drink beer with our cousins, but it was frekkin fun. On carnival Sunday we then headed to the capital to participate in some smaller scale carnival festivities.  The carnival festivities were held on the Cinta Costera (Coastal Beltway), the roads were blocked off and several stages were erected and there were blocks and blocks of food and alcohol vendors.  I'm not one to normally "pop bottles" but I make an exception when I am in Panama cause its so cheap.  $20 bottles of rum & chasers had us on Cloud 9! 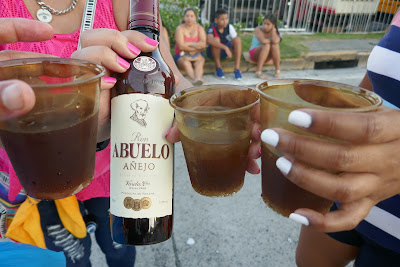 Sunday night was the Polllera parade. The Pollera is the National Costume of Panama, they are handmade and worn during festivals or celebrations. 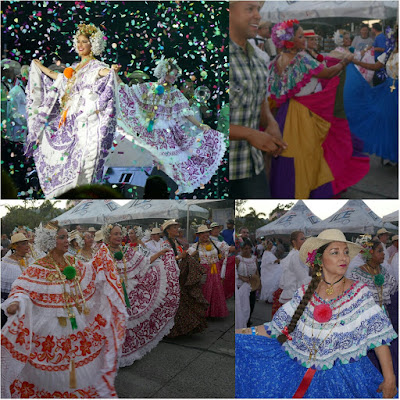 There are several types of polleras and the one you own kinda of displays your society class level.  The one that is white with one other color (below) cost a couple thousand dollars and is worn with several thousands of dollars worth of gold, the hair is also adorned with several hundred dollars worth of tembleques (the beaded flowers that I always have in my hair). 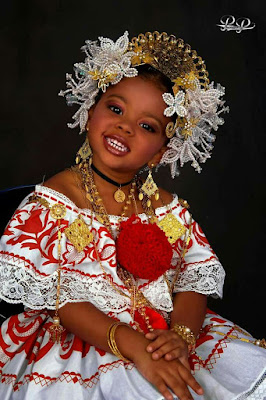 The further down you go, the less gold and hair ornaments you have.  Pollera that I adore is called the Pollera Congo (below) and of course it originates from my province of Colón (FYI, Colón is a province and the capital is the city of Colón.  So I am from the province and city of Colón). The Pollera Congo only costs a couple hundred dollars, but the beauty of it is how many different colors it has.  It is worn with no gold, more so with mardi gras style beads and flowers in the hair.  I really wanted to get a Pollera made for me this trip, but maybe next time.  I am determined to own one!

Along with the beautiful polleras, the diablos (devils) wandered about the Cinta Costera.  There were only about 20 or so diablos wandering about, but if you were in the province of Colón where they originate you would see hundreds.  I like to throw this disclaimer out there because there is always someone Not In The Know that thinks the diablos represent something satanic.  “The diablos represent the Spanish slave masters. The diablos cause nuisance the days leading up to carnival, but on ash Wednesday they are captured & baptized. Highlighting the triumph of good over evil.” 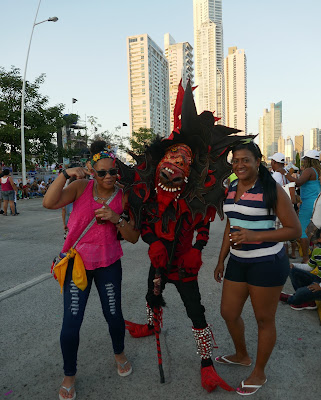 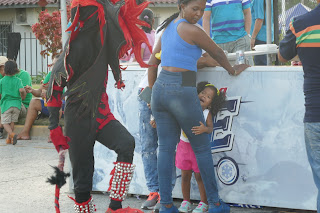 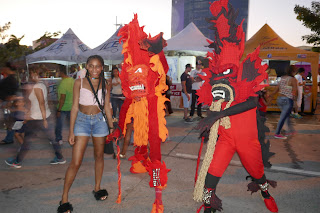 Each year in the Portobelo in the province of Colón they host the Festival de Diablos y Congos where you will see hundreds of beautiful Polleras Congo and amazingly hand crafted diablo costumes. Here is a quick video that I love that displays the Festival de Diablos and Pollera Congos.
WHOOPS I kinda wandered off there for a bit, my bad. Lets get back to the trip recap…   We went back to the Cinta Costera Monday afternoon for a Wet Fete, five water trucks were on hand to save us from the blazing heat. Drinking, dancing, and jamming in the sun! 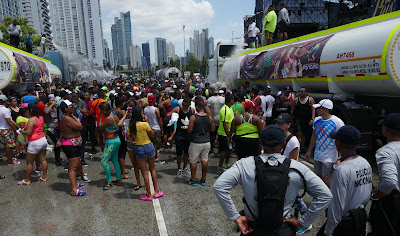 We only lasted about 2 hours then we headed back to our hotel. When we are in Trinidad we endure the heat and pain cause dammit we dropped mega $$$ for the trip.  But this trip not to much, so back to the hotel we went Guilt Free!   Some more family members joined us and we had a splendid afternoon at the Hard Rock pool. 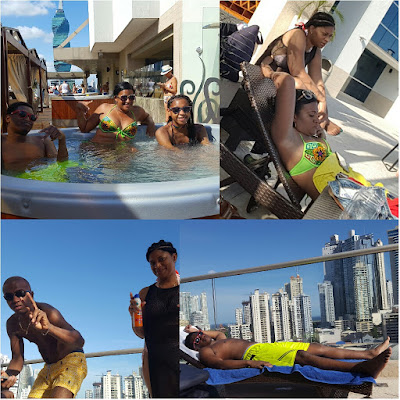 Swimming and drinking all day in the blazing sun is exhausting.  We thought about heading back to the Cinta Costera that night, but we ended up in the living room watching the entire OJ Simpson series on Netflix. Oh the hilarity!!!!  It was actually pretty entertaining or maybe it was the alcohol that made me think that.  Either way, we enjoyed doing NOTHING!!! 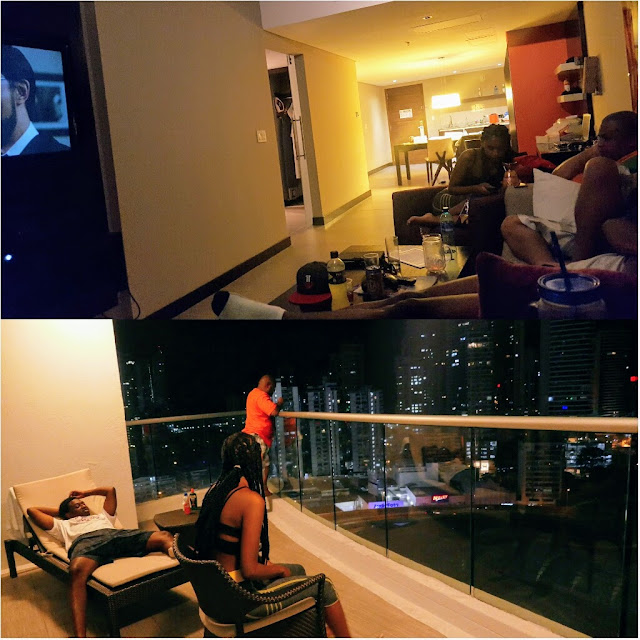 The next morning aka Carnival Tuesday my nephew and I spent breakfast on a mission to get LIT!!!  The Hard Rock comes with free breakfast buffet which includes a self service mimosas and  a bloody Mary bar.  They also had someone whipping up fresh fruit drinks which we would then add vodka too.  Yeah we shoulda coulda went down to the Cinta Costera after breakfast to enjoy the GRAND FINALE, but we took our drunk asses back to bed. 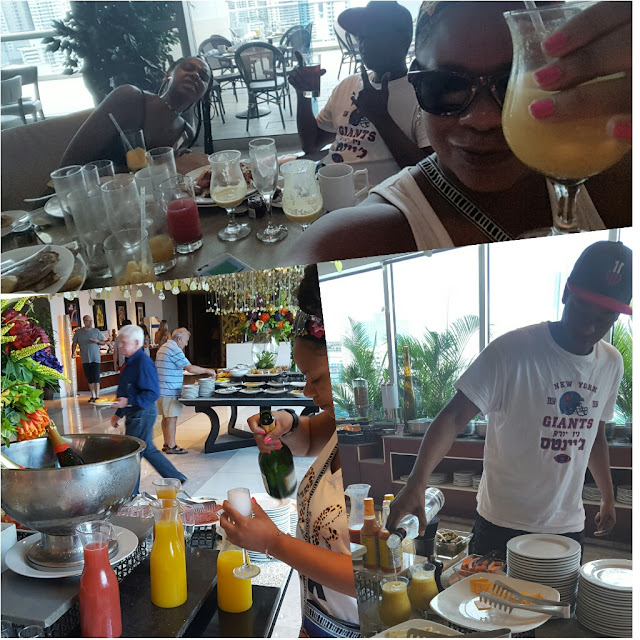 I tried to take the kids to the mall later that day for some shopping, but apparently everything SHUT down for carnival so everyone can head to the interior to celebrate.  We then headed to Casco Viejo aka Old Panama for some shopping of a different kind.  Hand-made items sold by the artists who make them.  I always lose my daym mind when I go to  Casco Viejo cause I want to buy every single item there. 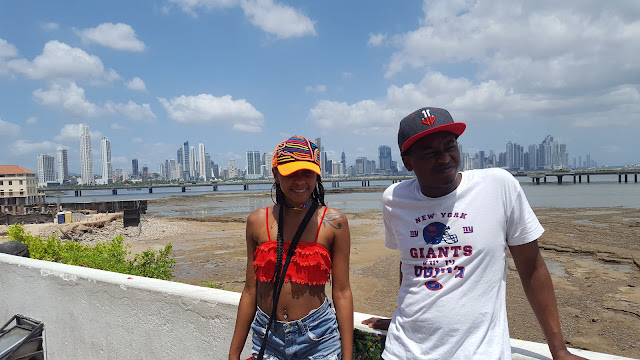 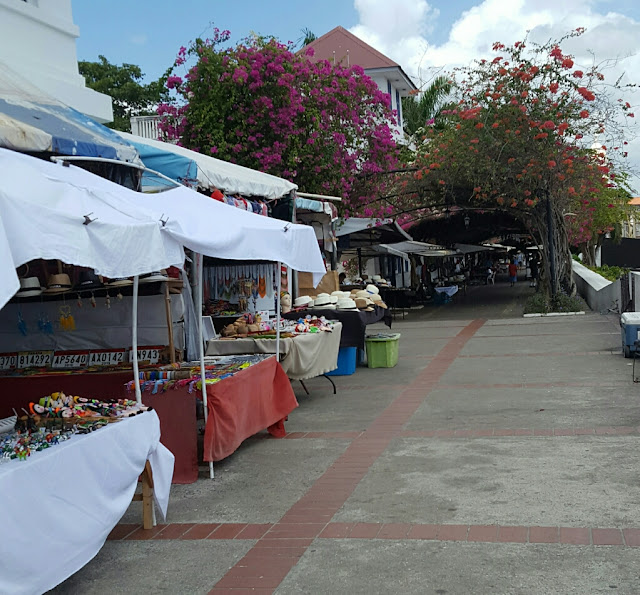 A lot of Casco Viejo was also shut down, but we were able to get some of shopping in.  Craft heaven from the Kuna Indians selling their Molas (colorful fabrics and crafts) and other artists. Got plenty goodies for myself and souvenirs for my BFFs back home in ATL, lawd where would I put all this stuff???   Wallet was most def on FLAT FLAT when I left! We headed back to the hotel and later that night hit up the Cinta Costera for some more carnival festivities. Even though we had a full meal before heading out, we were starving a few hours later. Maybe it was the alcohol, maybe it was all the walking.  We set up shop next to one of the many street vendors and proceeded to eat like 4 round of chicken kabobs. As I was eating my very last kabob I thought, this meat feels a little tender, I threw it away and went on about my night. To Be Continued... 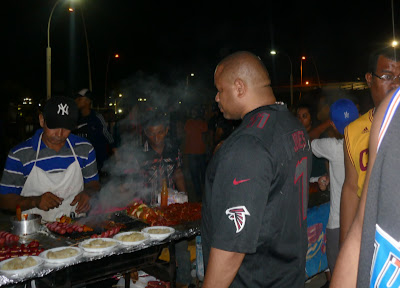 Ash Wednesday Paco, my daughter and I woke up bright and early and climbed Ancon Hill. If you are ever in Panama I recommend setting aside a couple hours to enjoy this trek.  Its about a 30 min walk up a mountain, but once at the top you will have panoramic views of the entire city.  A sea of skyscrapers from one angle, the Miraflores Locks on the Panama Canal from another angle, and the Bridge of the Americas from another angle. Because the canal cuts through the entire country of Panama there obviously is no land that connects North and South America.   For YEARS the Bridge of the Americas was the only stationary road that connected North and South America, in 2004 a 2nd bridge was build. 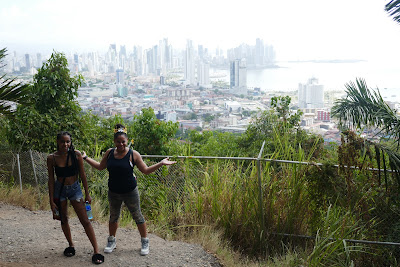 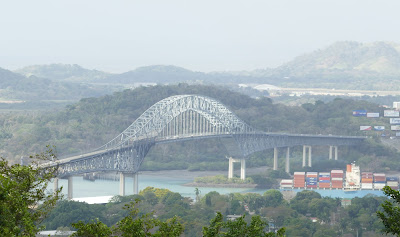 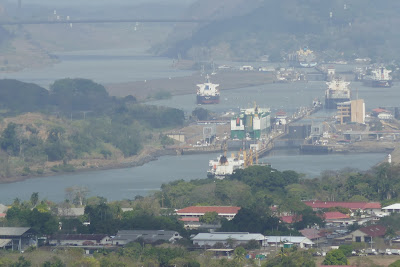 So we enjoyed the amazing views of our motherland for a while and then headed back to Casco Viejo so Paco could also partake in some of the awesome shopping the kids and I got down on the day before.  We had some Chinese food for lunch because surprisingly Chinese food is frekkin amazing in Panama.  Maybe it’s the addition of the magical Caribbean spices??? As good as the food was, I really couldn’t eat much. One by one we all started to not feel so well.  Aarrgghh that chicken from the night before caught up with us.  The next few days were a blur as threw up everything that I consumed.  I felt so skinny after I recovered and am thinking about giving myself food poisoning every couple months!!!
I wanted to point one thing about our return to the US.  Paco and I have Global Entry which allows us to bypass the LONG AZZ customs lines upon return to the US, but our kids do not.  Someone put me onto the Mobile Passport app and seriously the kids breezed past the customs line just as quickly as we did.  That was crazy cause its FREE. If it wasn’t for the fact that I also get TSA Precheck, I might have considered not renewing my Global Entry in 2019. 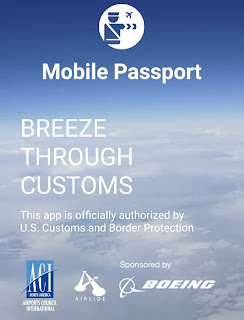 So despite ending the trip with food poisoning, we had an amazing time in the motherland and our desire to move back home was renewed! Now if only I could get my ISH together so I can move back before I frekkin retire. While hiking Ancon Hill we even found a great place that we could see ourselves living. We would be right next to Casco Veijo (great shopping, eats, and nightlife) and the Amador Causeway and a quick & cheap uber ride away from everything else (Remember I told you how insanely cheap Uber rides are in Panama. The rides are so cheap, there isn't even a need for Uber pool).  You can however pay a little more for an English speaking driver. 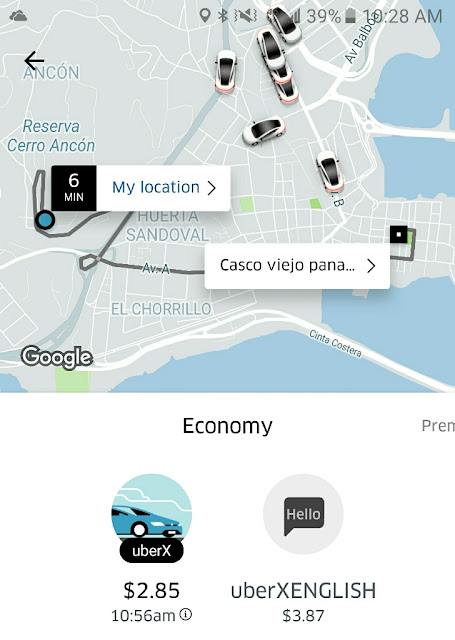 So until we meet again my beautiful Panama.  Te amo! 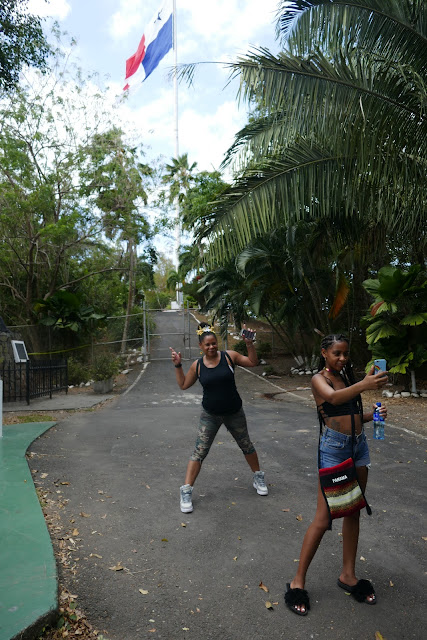 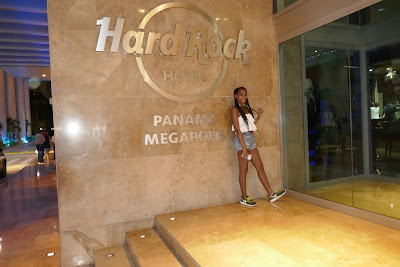 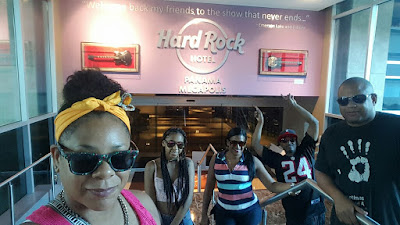 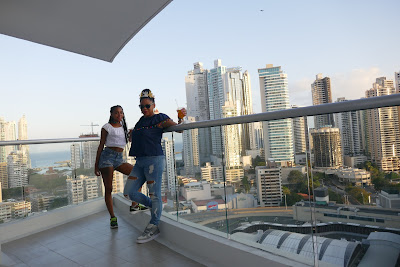