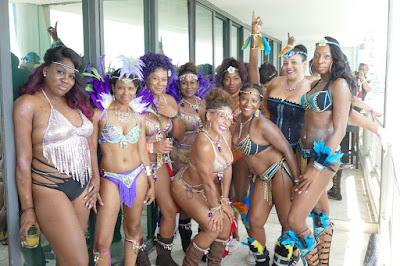 Miami carnival 2016 got thrown a wrench by Category 4 Hurricane Matthew.  Miami and Ft Loddy Doddy airport both announced that they were shutting down around noon carnival Thursday – until Friday.  Thursday afternoon is the time when most people arrive to carnival, my crew included.  All us Thursday people had our flights cancelled and were scrambling to get on the next available flight. Miami carnival never disappoints, even when we are just chillaxin on the balcony with some chunes and booze, we are having AH FREKKIN TIME!!!   The thought of missing this awesome experience was a NO GO, not gonna happen!  We were getting there by any means necessary… plane, train, bus, automobile! Per the airline, Saturday would be the earliest I could fly in cause Friday was booked up.  Miss 2 days of carnival, uh negative! I tried to get a flight into Orlando or Naples Thursday evening and was going to just drive to Miami.  Finally Paco made the executive decision that we had to duck work Thursday and get out asses there before the airports shut down… say no more Bro!  American had a 5hr wait to speak to a rep, but my chica Selam hooked me up with her friend who works for AA and she booked us on the AM flight to MIA with the forewarning, “Don’t miss your flight because this is the last flight before the airport shuts down!”  Roger that!!  This might sound crazy if you are not Caribbean, believe me when I say, there were A LOT of familiar faces in the airport that morning.  Hurricane Fete we say!!! 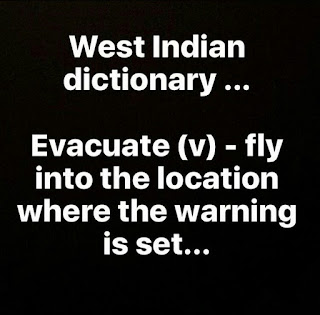 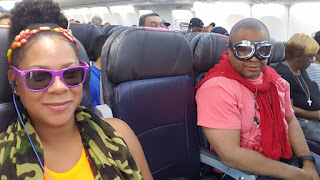 We brought a few bottles of liquor and snacks with us JUST in case the stores in Miami were closed when we arrived. Immediately upon landing we went straight to Publix and stockpiled food, actually we kinda went overboard on the food.  I must give a shout out to Publix for having staff on had to quickly refill the shelves.  When there is even a threat of snow in ATL every single aisle in every grocery store is completely empty! Thank god we went straight there cause they closed the doors shortly after we arrived and the liquor stores were CLOSED!
Since we had a little time to kill before check in we attempted to go to One Island Mas camp for costume pick up, but abandoned our mission as the wind and rains picked up.  Took our asses back to the hotel and planned to cook a hearty meal and shelter in place (well they cooked, I made  Rum Gummies). 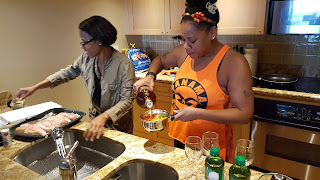 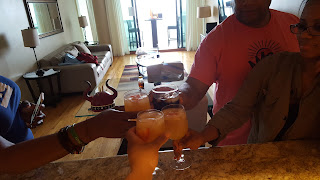 Yeah it rained hard for like 2 hours and then it was beautiful, clear skies.  Le Sigh! Pour out a likkle liquor for all the soldiers that missed carnival cause of the anticipated hurricane. 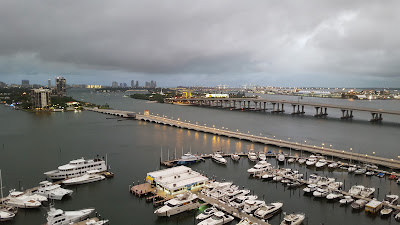 We were supposed to hit Tribe Ignite Thursday, but that was rescheduled due to the storm.  Luckily TJJ Arrivals was rescheduled to an evening, in-door fete so we had something to do with our lives.   I rather enjoyed Arrivals, it was great to have something else to do on carnival Thursday evening.  We always do Tribe Ignite, except for that one year we tried New Yorkers and hated it and decided to just go back to what we know. 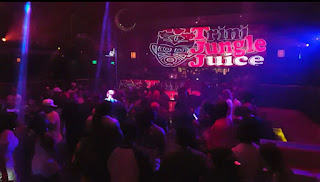 Friday morning in Miami was frekkin beautiful.  Charmaine and I strolled through Miami for some shopping while Paco went to resume the costume pick up mission.  Rise/Shine which is usually held on Key Biscayne beach Friday afternoon was relocated to America’s Backyard which is HUGE indoor/outdoor compound.  Even though this places was massive, they weren’t ready for what hit them.  10 billion, trillion Caribbeans ready to FETE!  The bartenders were overwhelmed like a MOFO, one of em even stormed out and quit. LOL!!! 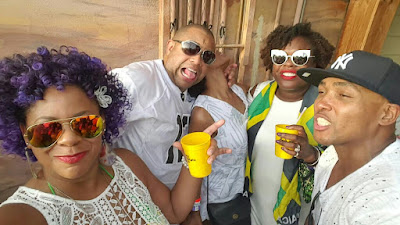 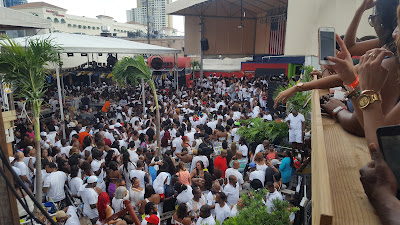 We left Rise/Shine around sunset, now that’s a first! Thanks for throwing all the fete schedules off Hurricane Mathew!  Later Friday night Charmaine and I hit the Clevelander on South Beach for drinks and dinner with our chica Jasmine (who we met at Jamicia carnival a few years back). 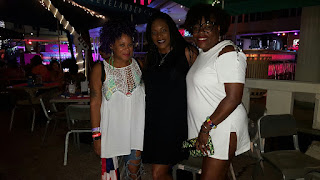 Around 9am Saturday morning it was time for jouvert, my absolute favorite event at any carnival.  What can I say about jouvert to help those not-in-the-know understand?  We all have this lil angel and lil devil that sits on our shoulders, Jouvert is where the lil devil gets set free and you get to be as WOTLESS as you want to be. No judgment cause everyone around you is equally in Hot Azz Mess Mode.  We just get DUTTY!  Get on bad bad bad!  The idea that you can have the time of your life old wearing clothes that you care nothing about.  No need to comb you hair, just put on a bandana. No makeup, throw on so shades that you don’t mind losing or breaking… what could be more invigorating? 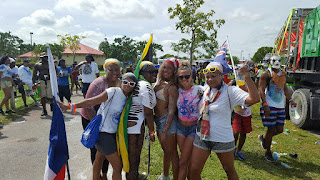 Took a couple hours to get our lives together after jouvert (when I say get our lives together I mean our drunk azzes stumbled into McDonalds, ordered 40 chicken nuggets, a sh*t ton of fries, and stole soda from the fountain machine with our jouvert cups).  Took a quick likkle nap and then headed to Soca Brainwash.  Brainwash is the fete where you will see the most familiar faces.  Its so hard to link on the road or jouvert cause everyone is in different bands.  No doubt that we hada  frekkin TIME at Brainwash. 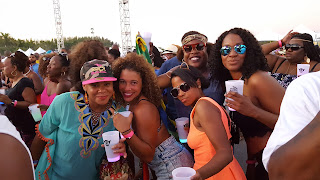 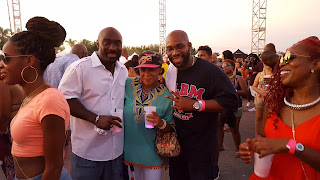 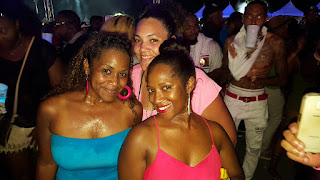 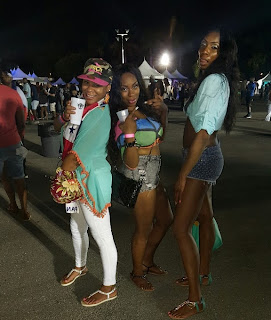 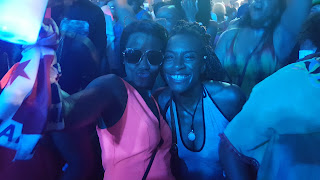 After Brainwash it was a WRAP. Zzzzzzzzzzzzzzz time to rest up for the road march.  We had a mini pregame fete at the condo Sunday afternoon. A few of the fellow stormers stopped by and we drank while we got bling’d up.  Out of all of us that went to Miami Paco +1 were the only ones who signed up with a band.  The rest of us decided to save $400 and just make our own costumes or recycle an old costume.  You know what?  I'm not even ashamed!

I can’t really speak on the road march cause it’s just a blur.  If you don’t remember, that means you obviously had a blast.  There is always room for improvement and we discussed things that we can implement next year to ensure even MORE fun is had.  *whoop whoop* 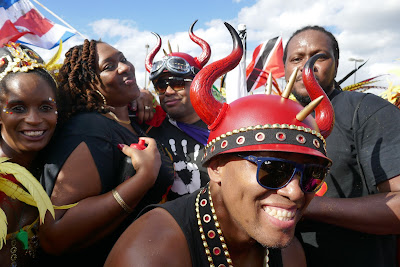 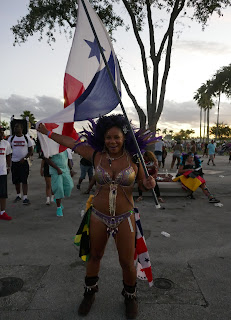 SSSBlue fete Monday afternoon was our last carnival fete for the weekend.  We walked in the fete in “Wind Down” mode, but everybody was on LEVEL 10. You WILL get dutty.  You WILL get wotless! Yes, it was a blast, but like Kevin Hart said, "We wasn't ready!!!" 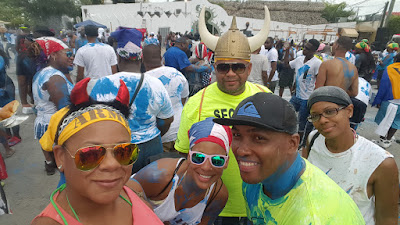 We were in Tourist mode after that.  Took our blue azzes to south beach, of course grabbed some Fat Tuesday ,and then did and ocean scrub to get the paint off. Chillaxed with booze and Mr. Bose for a few hours. 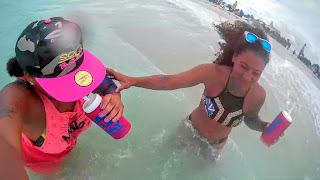 Went to Bayside marketplace for dinner along the water and of course more Fat Tuesday.  And like that Miami Carnival 2016 : The Hurricane Edition was over... Miami Good Nite!! 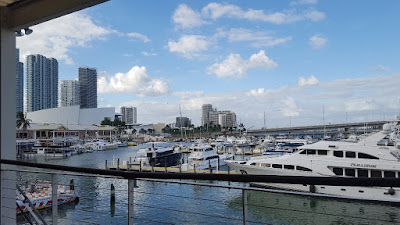 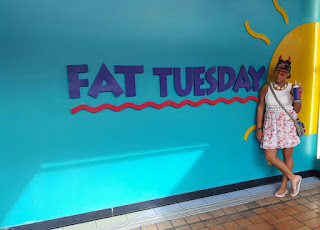 Another carnival where we had “old people fun”  a mixture of fete fete fete and chillaxing with friends and alcohol.  Our favorite place to chillax of course being our condo balcony. 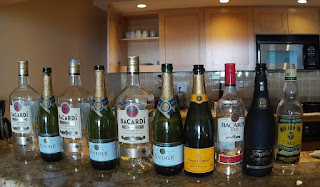 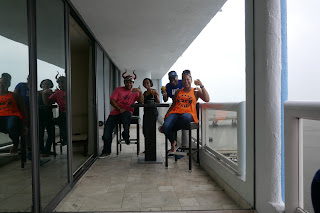 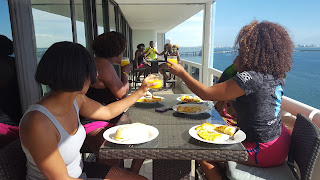 Every year (I promise every year, never fails) I encounter 1 or 2 people that tell me that they didn’t have fun at Miami carnival.  Well you my friend did it WRONG, please take the next 12 months to reevaluate your life and holla at me when you are ready to do it RIGHT!!!

And now I leave you with a recap video 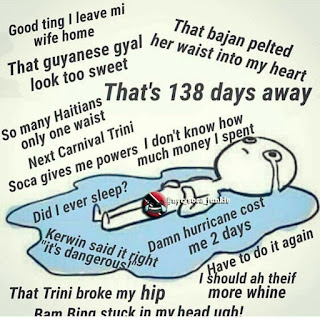