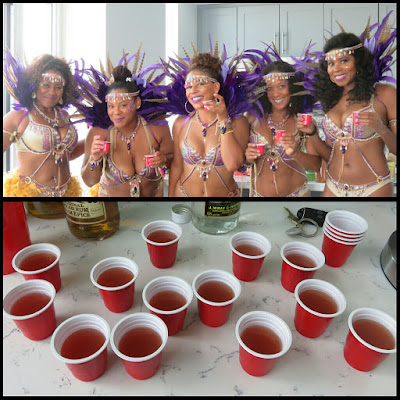 Man I’ve been trying to get my life together to write this Caribana blog for 4 weeks. Have I gotten it together yet?  No! But here goes…
Haven’t been to Caribana since 2013, for those not in the know Caribana is Toronto’s Caribbean carnival.  Even though I had a good time in 2013 I didn’t return in 2014 because I found out when I touched the road march that it’s a DRY carnival, meaning NO ALCOHOL *ZOINKS*!  In 2011 and 2012 I was a stormer (didn’t join a band, just bum rushed the parade).  So in 2014 I decided to try out Crop Over in Barbados instead.  Crop Over was fun, but it’s pricey (over $2K) so back to Caribana I came.  Toronto came in under $1K (flight, lodging, car, costume, & fetes) and I can say that I left feeling like I got my moneyz worth.


No need to go hard in the paint like we do in Trinidad with nonstop back to back fetes.  I had old people fun this trip.  What is old people fun you ask?  It’s a mixture of fete’n and relaxing. 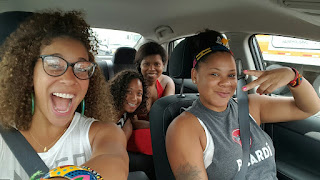 Landed bright and early Friday morning and headed to the hotel of the homies that flew in Thursday night.  We didn’t hit a day party Friday cause we had a ton of errands to run.  Went to pick up our costumes at Saldenah Mas Camp, the craft store so I could make a minor alternations to my costume (booty cheeks were ALL THE WAY OUT and my booty aint that sexy), hit the grocery store to stock up our condo, and of course hit the liquor store.
As I mentioned in my 2013 Caribana blog Liquor is HELLA expensive in Canada, I would have to turn to hard core drugs if I lived there cause I couldn’t afford to indulge like I currently do.  Traffic in Toronto is nasty, all dayym day, for reasons we couldn’t understand.  Wasn’t rush hour, no construction, like 5 lanes of traffic going each way, but just endless traffic. Le sigh!
Instead of getting a hotel we rented an adorable 3bd room condo. It was small, yet spacious (if that makes any sense), wierdos had enough room for yoga movements! 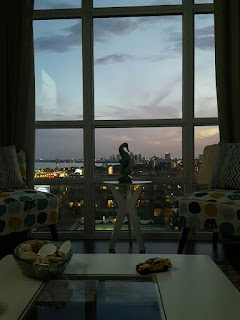 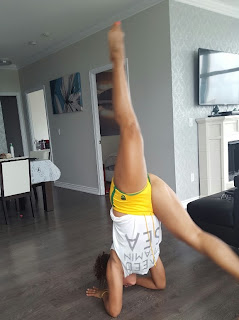 The condo owner had to stop by and fix the apple TV so we could play our chunes.  He saw our liquor stash and was like, “WHOA you know you can’t have a party right?”  No sir, we aren’t having a party, we just drink a lot!  *side eye*  Oh the joys of being Caribbean *wink* 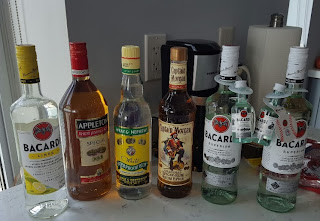 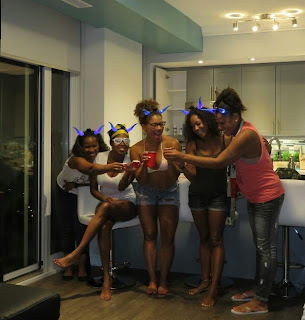 Friday evening we went to One Big Dutty Jouvert which was in an indoor jouvert. DAMMIT nowhere online did I see anything about it being an indoor jouvert. When will promoters learn that jouvert belongs OUTSIDE?  This jouvert did have a small outside water truck area, but it gets cold up there at night and I wasn’t trying to catch pneumonia, so we just ran away from the truck whenever the water alarm sounded. We bought the all-inclusive package so the non-stop alcohol helped us forget our woes, especially since we found a lil corner close to the door that had a better circulation of air. 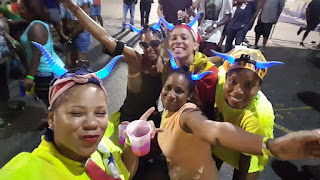 Saturday morning was carnival, well we didn’t get there till early afternoon.  Luckily our condo was walking distance from the parade (definitely came in handy when people got drunk outta their Got Dayym Minds later). Knowing that Caribana is a dry carnival and you can only bring so much liquor with you, we were on a mission to get NIIIIIICE before touching the road.  I won’t say any names, but some of the roomies ended up LOST IN THE MUTHA *BEEPn* SAUCE. SMH!!! 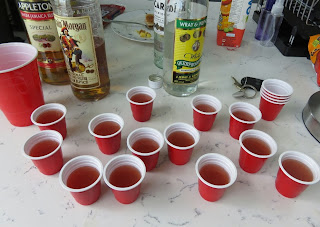 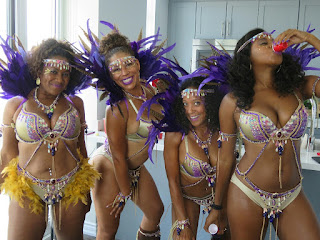 It took us forever to find our band, although in my opinion finding the band didn’t really matter since we weren’t gonna get any liquor from them anyway. Was at the parade for about 5 hours and lost each other a million trillion times.  Eventually I turned off my phone and stopped trying to find people and just enjoyed my day. 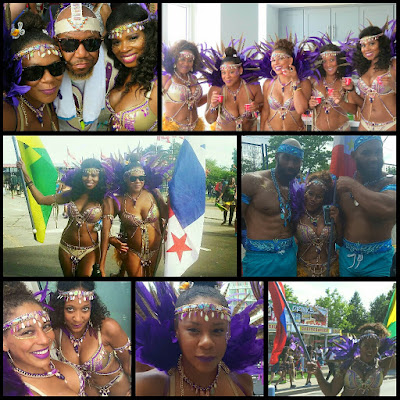 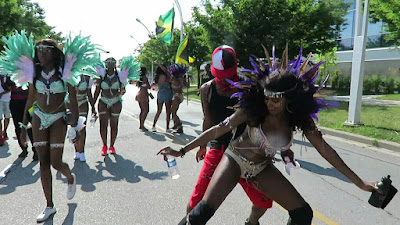 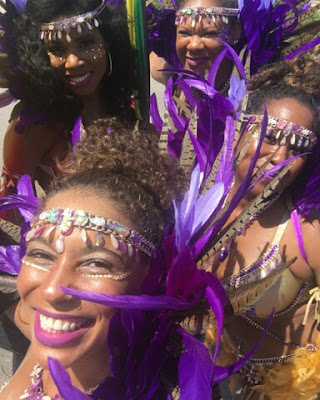 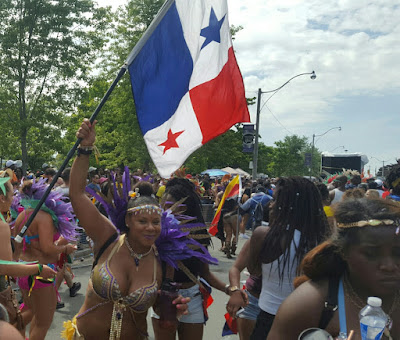 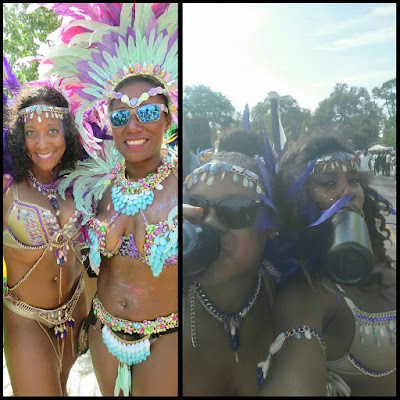 I may just make a costume and storm next time I come to Caribana.  There is no masquerader wrist bands and we spent a good portion of the day just jumping with random bands… why the heck not.  I like to save $$$ and maybe that way I can afford more of that expensive azz liquor they sell up there and won’t run out so early.


PS:  here is a DIY tutorial on the collars we had on if you want to make your own http://www.angelapanama.com/2016/07/diy-mini-carnival-feather-collar.html
Saturday night we headed to Carnival Kingdom Concert Party.  Lots of great performers such as Majah Hype, Olatunji, Kerwin, Rupee, Bunji, and some other folks. I not a huge fan of live events, but it was fun.  Like jouvert it was just so far away, must find fetes closer to home if we return.  We got a juicy nap after carnival so we were able to make it till the end of the show. 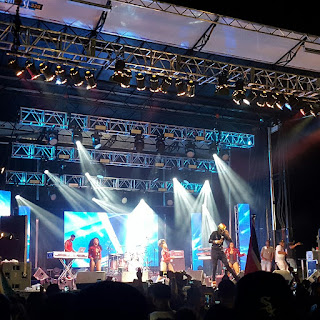 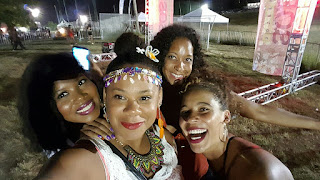 Sunday afternoon was the Saldenah Boat Party.  Sadly by Sunday we had smashed all the liquor in our condo (drunkies) so we started off the day kinda sober *No Bueno* Luckily our homie Wiz was on the boat and saved us with plenty plenty liquor!!!  We did eventually get tore up from the floor up and had a frekkin blast. 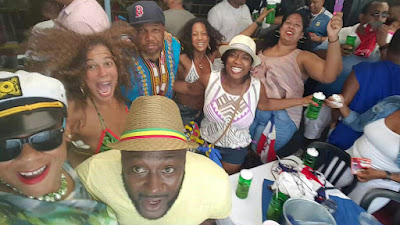 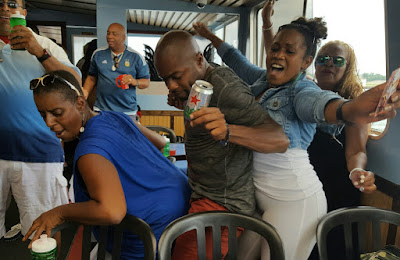 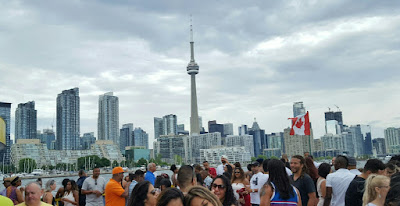 After the boatride we went into tourist mode and did some cruising around town, ate some street food, and had a few photo ops.   It was a good time just chillaxin with the crew. 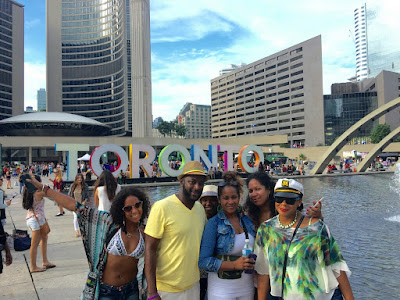 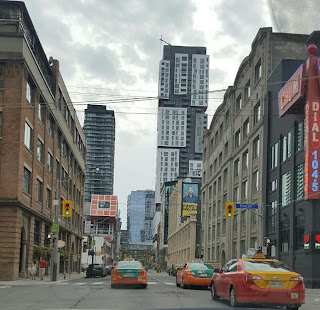 Toronto is such a clean & polite city.  Thanks for tolerating us Canadians! Didn’t do anything Sunday night except sleep our lives away & rest our old bones.  Nothing like a vacation were you get to balance fun with relaxation.
We would have liked to have a breakfast fete in the condo Monday morning, but as I stated previously our thirsty azzes smashed all the liquor by Saturday evening.  Were forced to eat tasteless turkey bacon by itself for breakfast.  Cole world!
﻿ 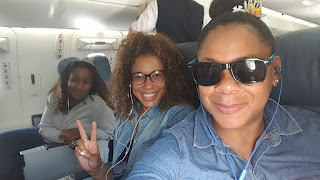 I leave you with a quick recap video, from here we begin the countdown to the next carnival 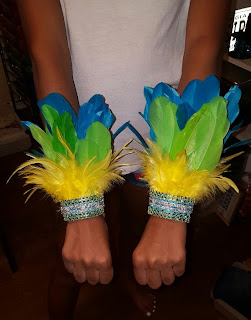 This is a very easy DIY carnival bracelet if you ever find yourself with a costume with no bracelet or a basic bracelet that you want to upgrade.