The Trials and Tribulations of Dating a Carnivalian 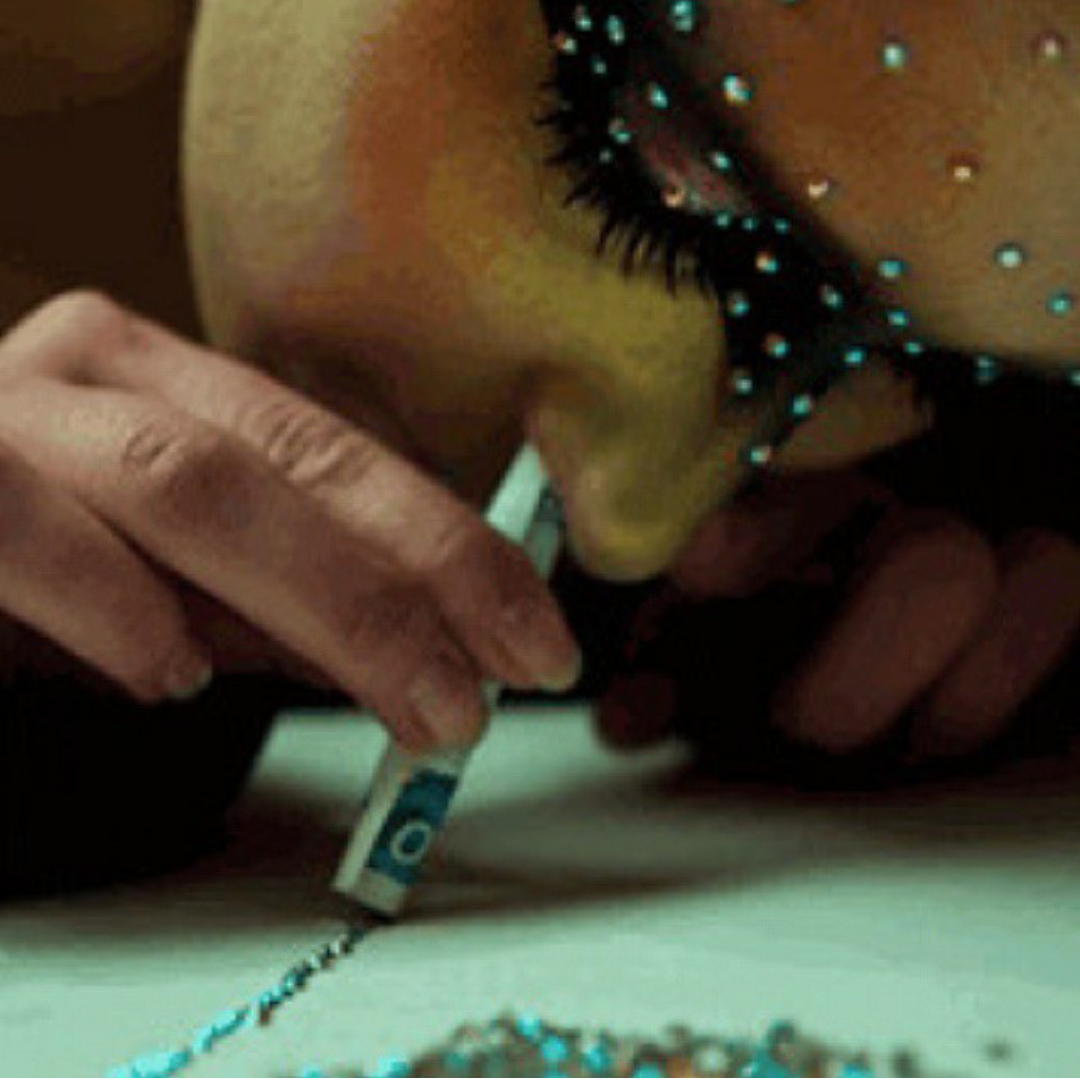 I was thinking, someone needs to write a How to Guide for Dating Caribbeans.  We are just a very special breed, the things that matter to many just don’t matter to us.  We grew up climbing coconut trees, playing in the jungle, bathing out of a bucket, going to the market in the morning for that evenings dinner. Although I spent a good portion of my life on military installations after we left Panama, I do cherish the times spent back home. But that book needs to have a chapter or three about the Carnivalians, of all the Caribbean massive, Carnivalians are the worst.  Carnivalians are those that are addicted to carnival.  I shall quote Lead Pipe - Carnival Addiction:

Carnival addiction!
Feelin so high, can't stop de feelin
I am de King ah bacchanal, I am de liquor animal
I Deh at every fete and festival, I Addicted tuh Carnival

There are so many soca songs about carnival addiction, I could go on and on forever quoting them.  Even Rick James would agree, it’s One Hell of a Drug!

A few years ago my American guy friend told me that his girlfriend wanted a pair of “Red Bottoms” for Christmas and my first thought was, “What’s that?” when he explained to me that they were really expensive high heels I said, “I could finance this, that and that for carnival with that $$$$.”  I can’t explain the infatuation with carnival. American music artists sing about going home for Christmas, Caribbean artists sing about going home for carnival.  It melts my heart when I see American flags waiving high during carnival.  I think, “That’s probably an American that dated a Caribbean many moons ago and the love of carnival stayed long after the relationship was over.”  I actually have a few American friends that are like that.


Below is the tale of 4 Carnivalians dating Americans:


1)      Married an American and gave up her carnival ways for a couple years.  One day she was back on the scene with a GANGSTA LEAN, I guess they had a come to Jesus moment.  He doesn’t join her for her carnival adventures, but I guess he knows his birdie will come home and his birdie was probably gonna go postal if she didn’t resume her carnival lifestyle.


2)      Also married an American, but her then fiancé told her that he felt like they were living separate lives.  He realized that joining her during our Caribbean outings was the only way to bridge the gap.  I’m glad cause he is a super cool dude and we enjoy hanging out with him & helping him learn the ins/outs. 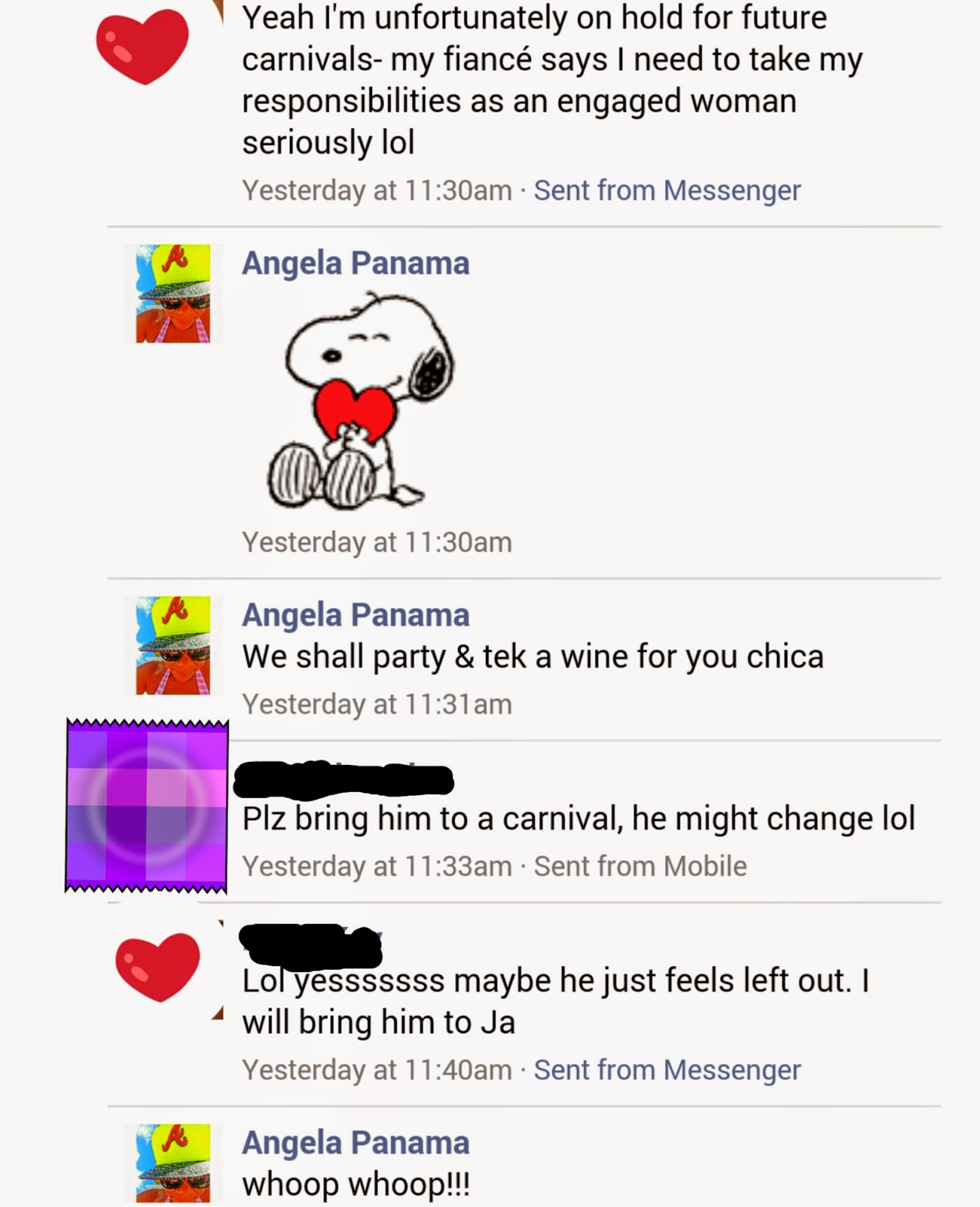 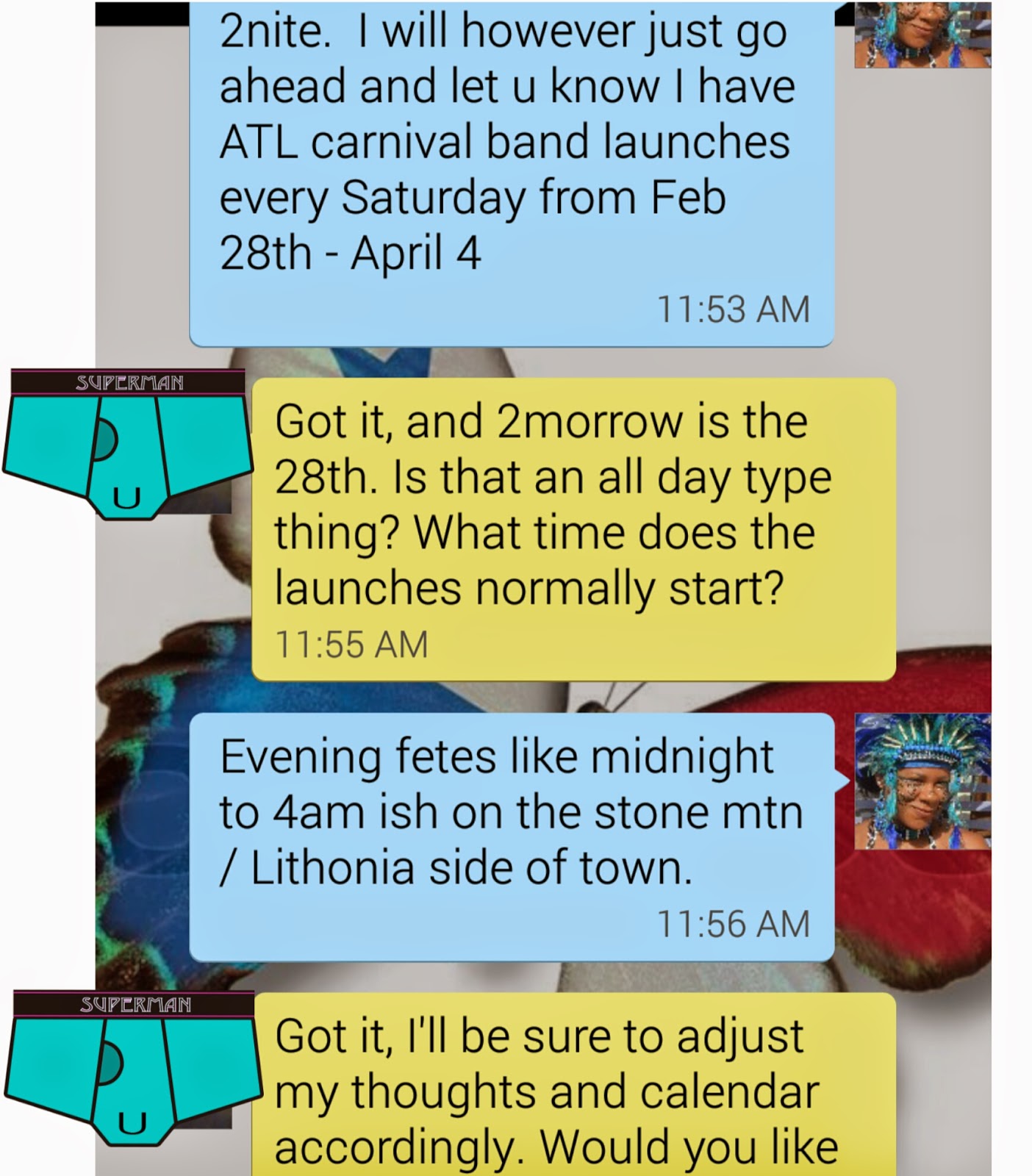 I have to quote and old blog post where I discussed my carnival lifestyle with Trini Jungle Juice. During the interview I was asked if there was ever a time that I missed a carnival that I was supposed to attend and my answer was flat out NO!  Now there are circumstances that should have had me missing carnival, but I wasn’t going to let that happen, carnival is my life.


·         I am in school at Georgia State University and have been forever, I have had to drop classes numerous times because there were tests that conflicted with carnival and missing the tests would have caused me to fail the class.    Missing carnival was NOT an option.


·         When trying to decide on a wedding date my best friend picked the weekend of Miami carnival.  Her wedding was in Jamaica, I told her I would fly in wedding morning and fly out that very same night.  I wouldn’t dare ask her to change her wedding date, but 1 day away from carnival is all I could give her. She ended up picking another date.


·         My brother Paco said if his job ever told him that he couldn’t take leave for carnival he would quit his job.  His resume is a lot more impressive than mine so I don’t know if I could go as far as to immediately quit.  But I surely would start looking for a new job in hopes that I found something that would allow me to still attend carnival.


Carnival dates are dates that are sacred, to ask us to miss carnival is to ask us to give up a piece of our soul.  You might as well lock us up and throw away the key because there is No Cure.


I will close with Majah Hype, you should replace “Trinis” with "Carnivalian".
By AngelaPanama at February 27, 2015