I have a secret shame associated with my carnival addiction.  Mainly the amount of $$$ I blow and the elaborate trips I could take elsewhere if I wasn’t so determined to attend carnival after carnival. In 2014 I realized that there are many many other people that share the same carnival addiction and I would like to introduce you to a few of them.  The pix below are only from 2014, these carnival loving folks Get It In!

First is Charmaine, I met her on di road in Trinidad 2011 and we have been linking up at other carnivals every year since.  She joined me Jamaica, Atlanta, Barbados, and Miami this year. 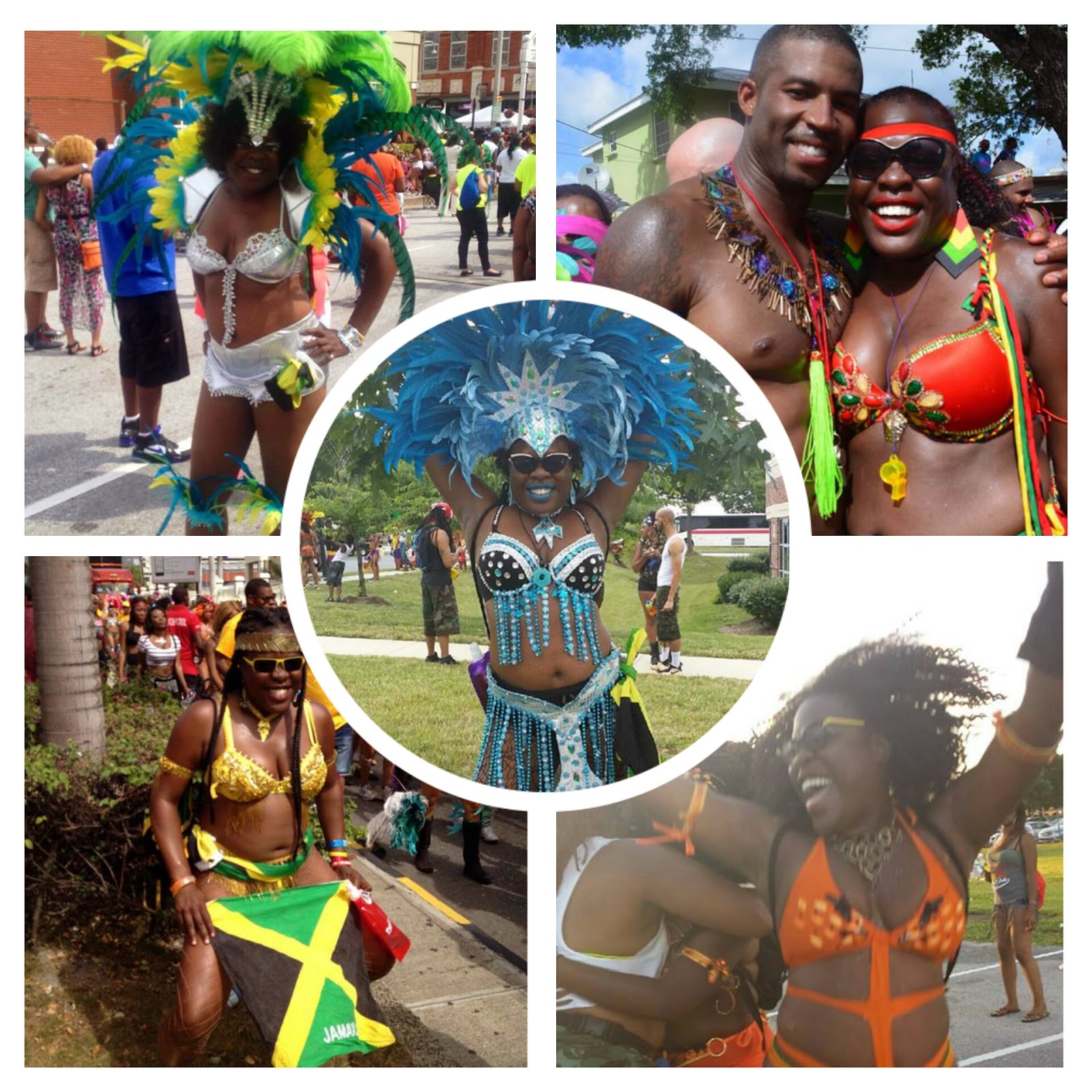 Next up is my bro Paco. Ages ago I wanted to get back into the carnival lifestyle and I couldn’t find anybody to join me, but my bro was all in.  His hectic schedule doesn’t allow him to join me all year long, but he did attend Trinidad, Atlanta, Raleigh, and Miami carnivals with me. 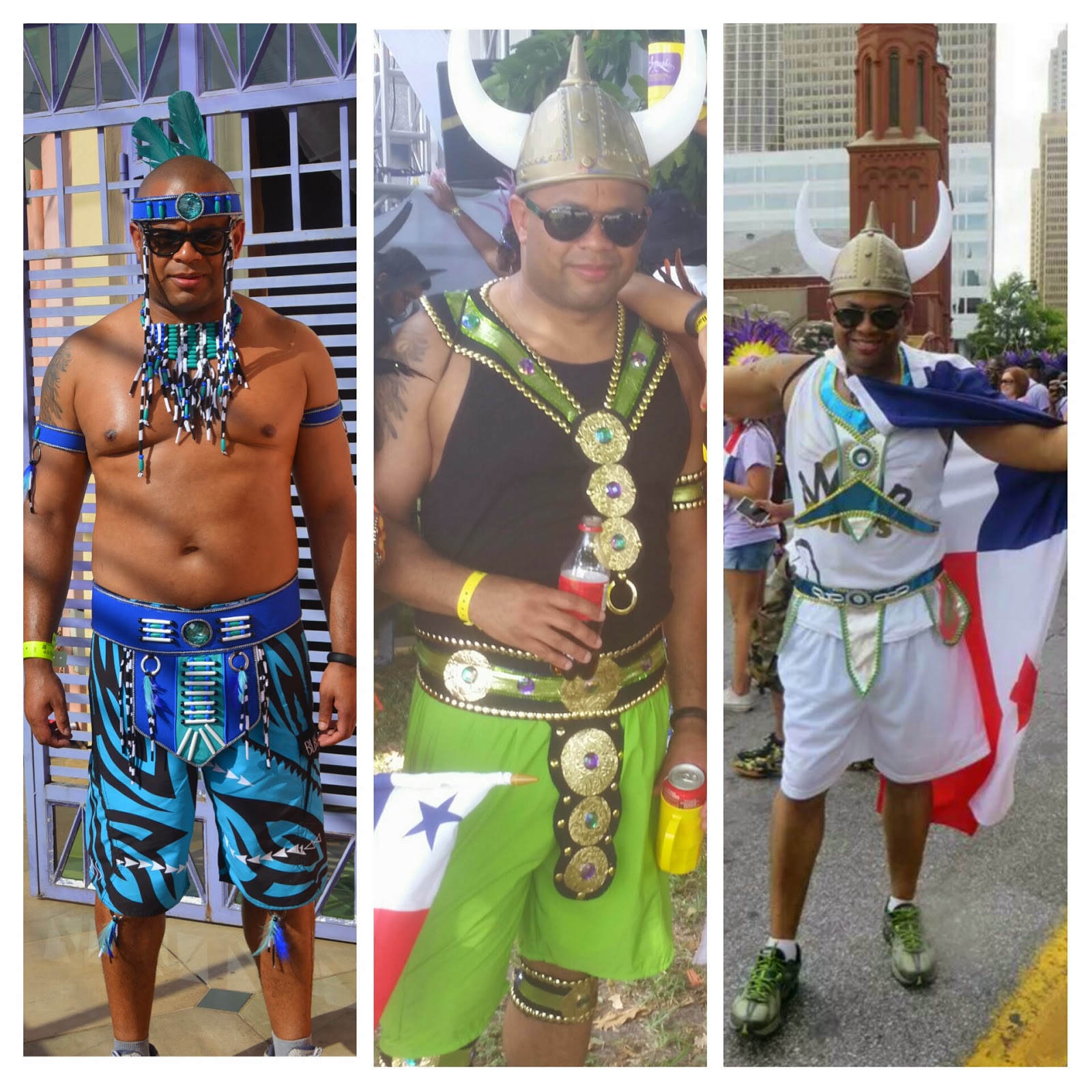 Jasmine & Beverly.  We met these two lovely ladies at Bacchanal Jamaica this year and instantly clicked.  Ended up linking with them in Barbados and Miami carnivals and will be attending Bahamas 2015 with them. 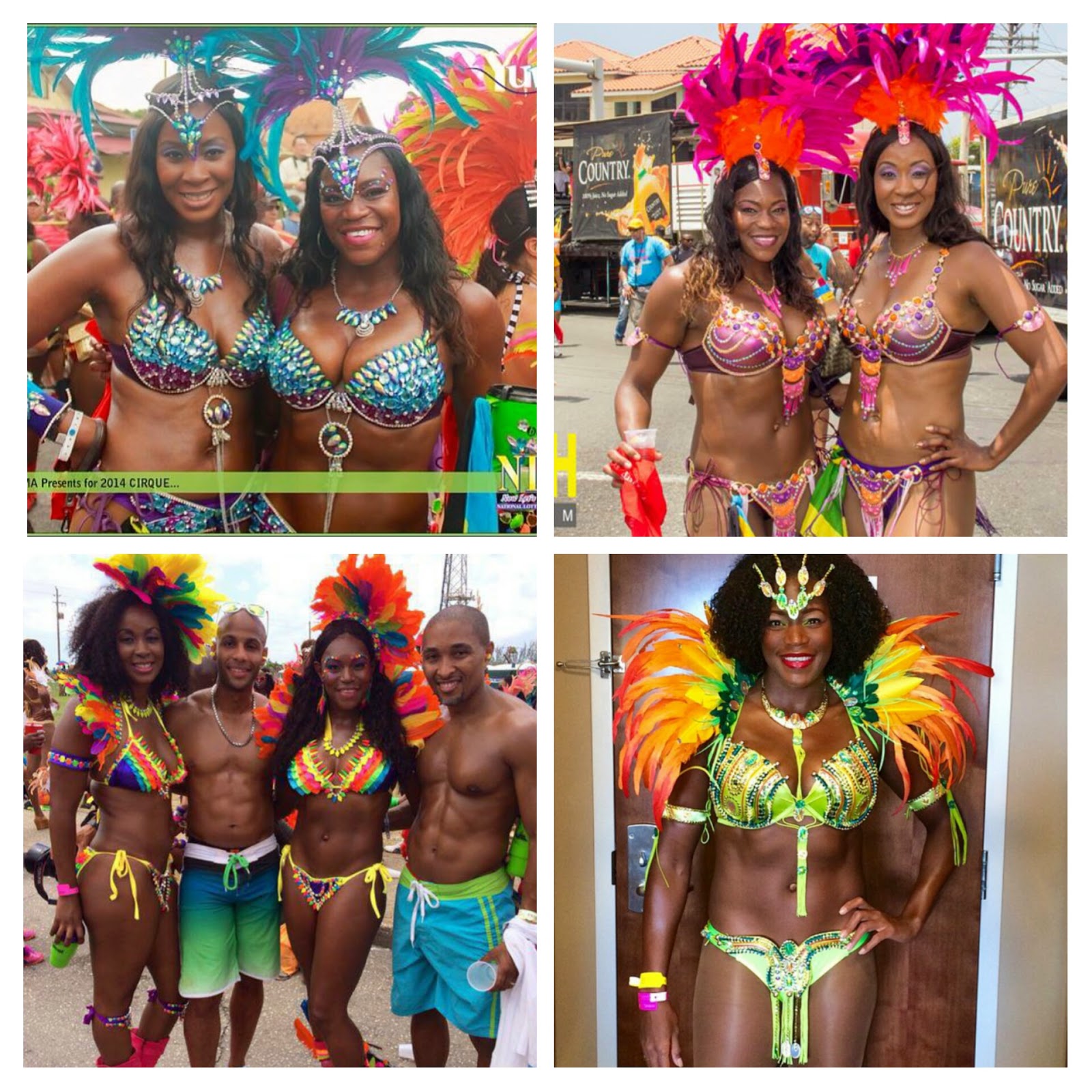 Jouvert Mike.  We have been hi/bye acquaintances for years, but ended up hanging out Caribana 2013 and decided to join forces for Cropover 2014. 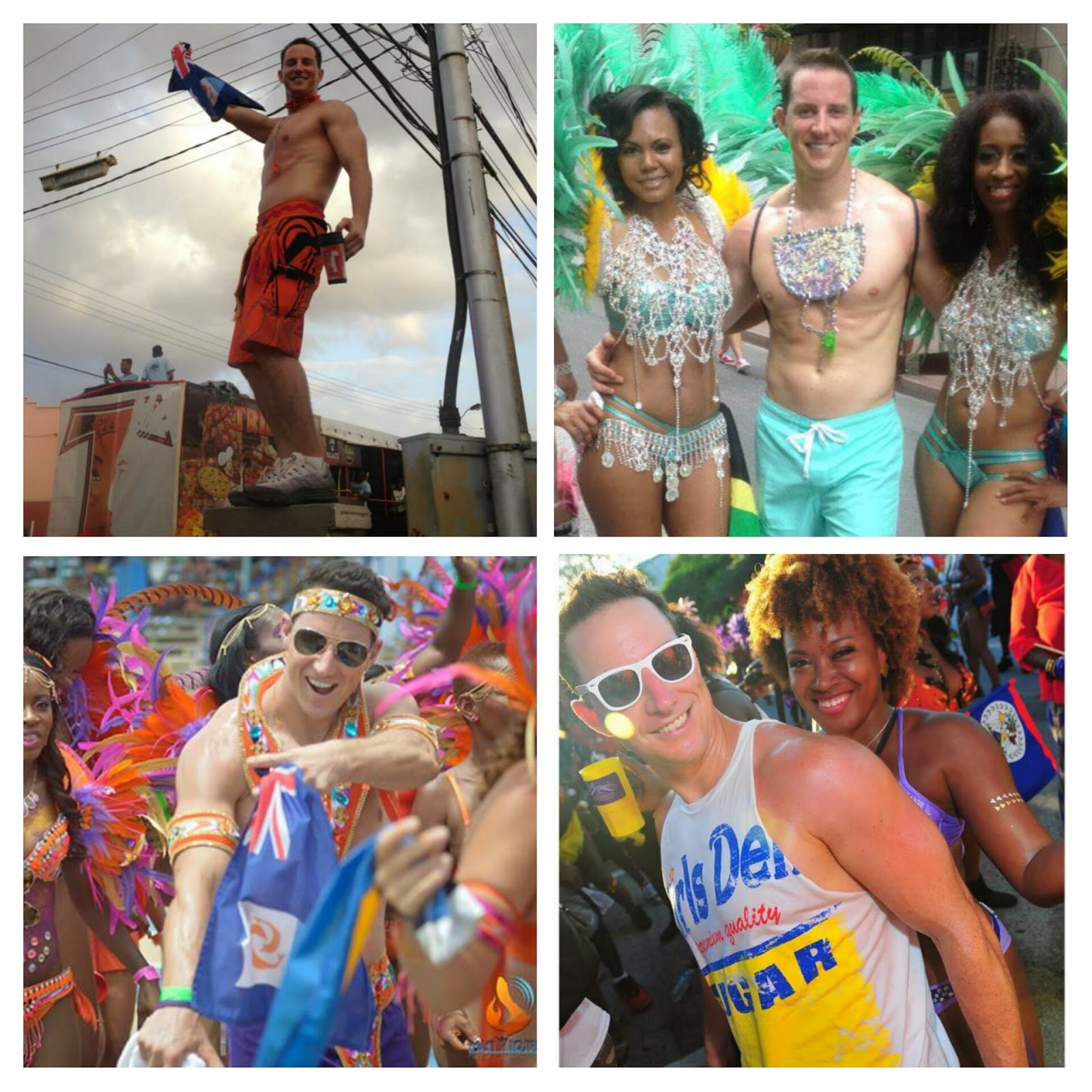 Michelle is another one I adopted after we hung out Caribana 2013, although I’ve known her for years.  She joined me in Trinidad, Jamaica, Barbados, Atlanta, and Miami this year. 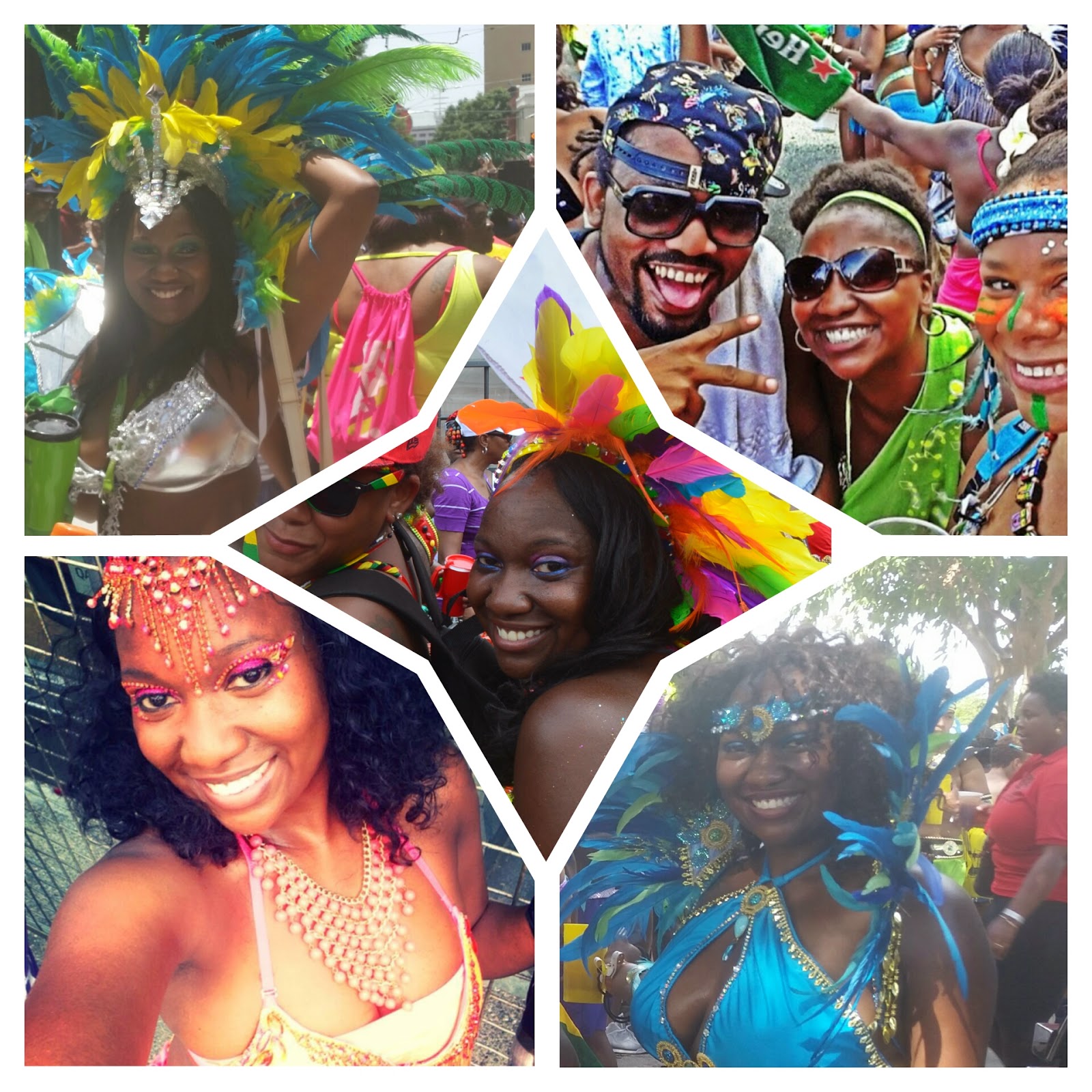 Winston I met at Bacchanal Jamaica 2013. Ended up running into him in the airport on the way to Trinidad Carnival 2014 & we exchanged info.  He then helped me with logistics for Bacchanal Jamaica 2014.  I call him and his band of muscle homies my International Body Guards lol  Bacchanal Jamaica is held in Kingston, JA but the gyals felt super safe when the fellas were around.  He actually attended more carnivals than I have pictured here, but you know guys aren’t that great with the cameras.  Trinidad, Jamaica, Notting Hill, New York, and Miami.  *disclaimer*  When it is not carnival Winston is a straight up Clark Kent.  As soon as another carnival reemerges, he rips off his suit and switches to Super Fete Man* 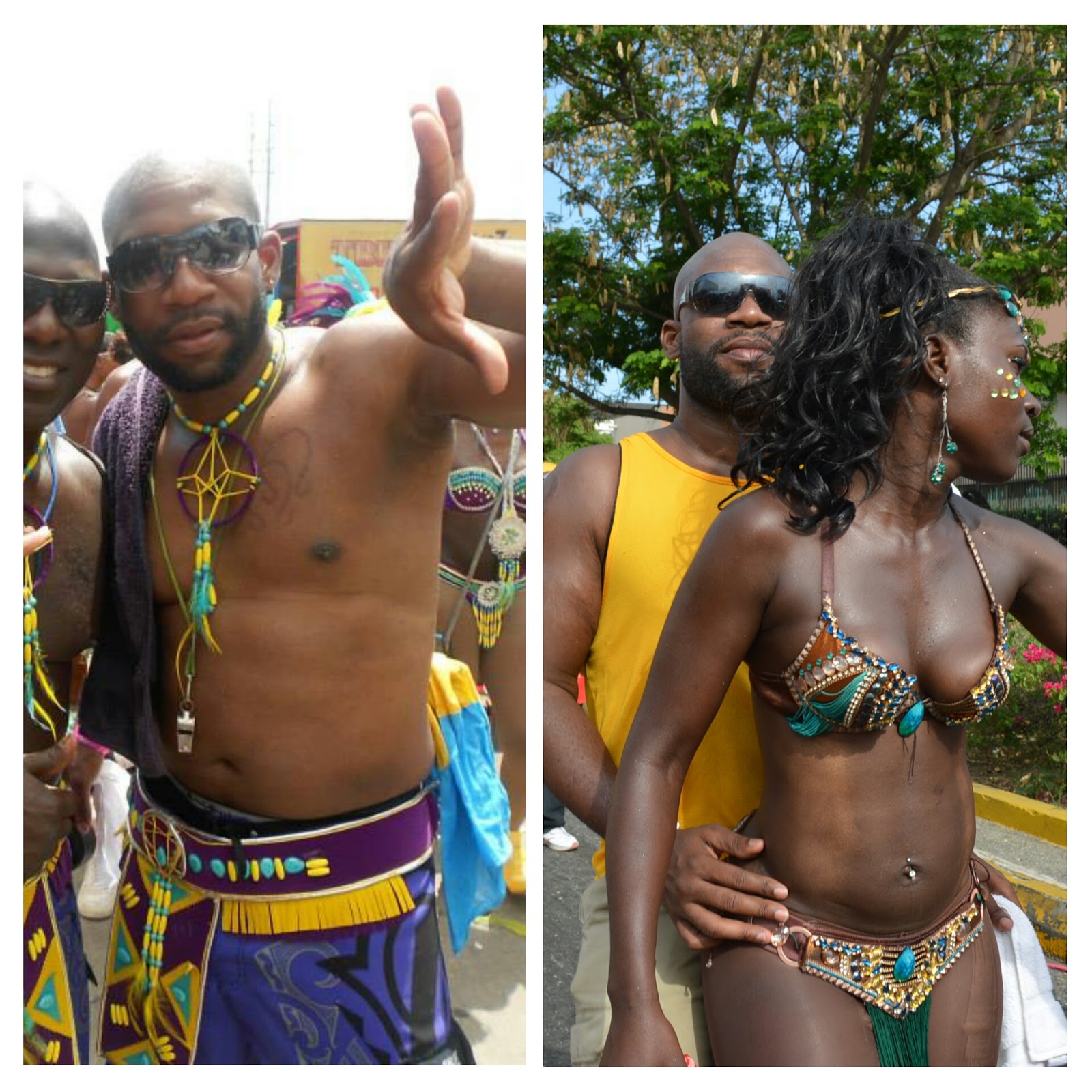 Jermaine is not a mas person, but he still loves him some carnival.  He attended Trinidad, Atlanta, and Barbados carnivals this year.  You can always count on him to capture some great moments on di road. 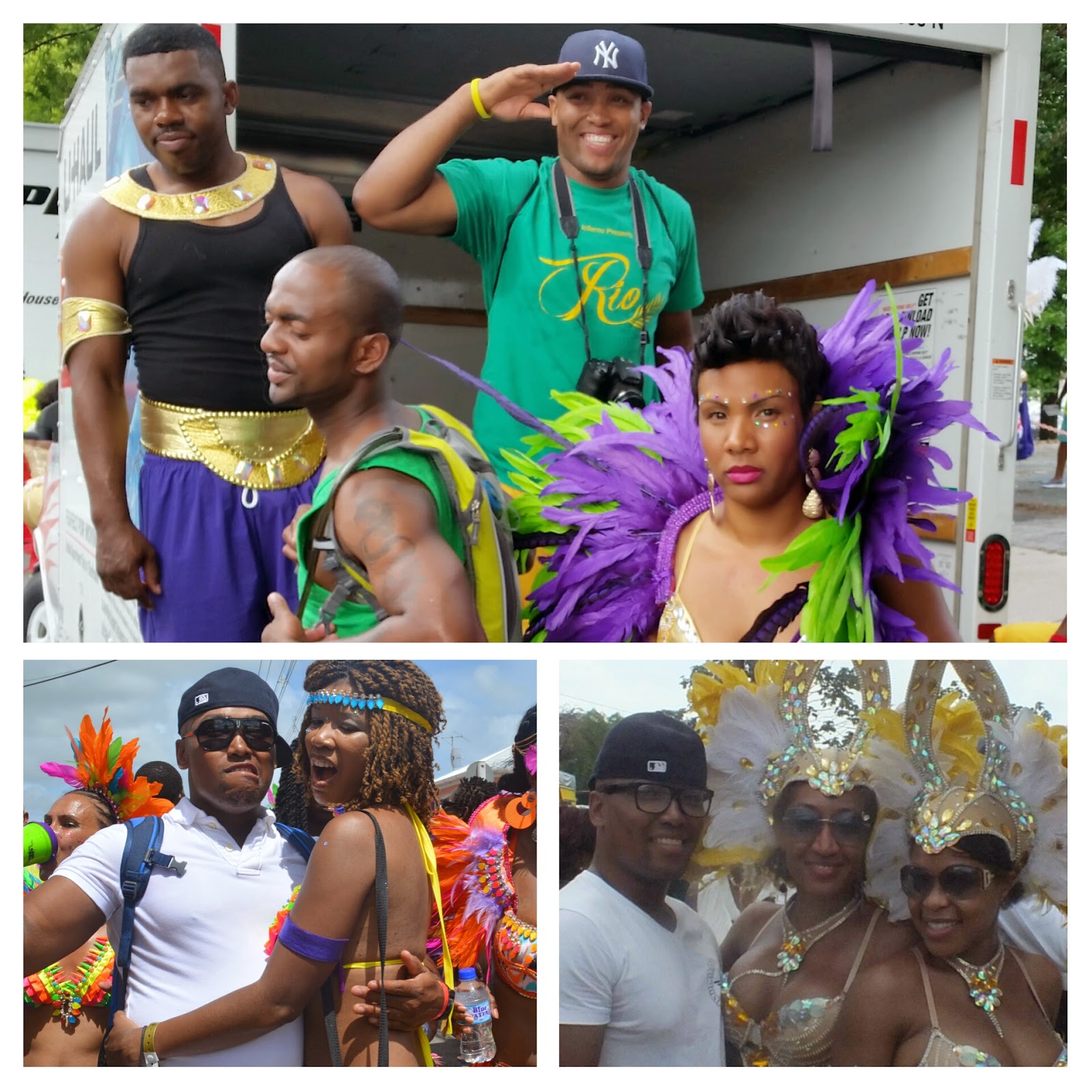 Next up is a Rhadi, but you may know him as the Trini Jungle Juice carnival doctor.  The writer of the www.TheUltimateRoadReadyGuide.com What Every Carnival Veteran Knows And Carnival Virgins Must: The 25 Things You Must Know About Trinidad Carnival.  Awesome awesome awesome guy, if you don’t already know him… I suggest you look him up. 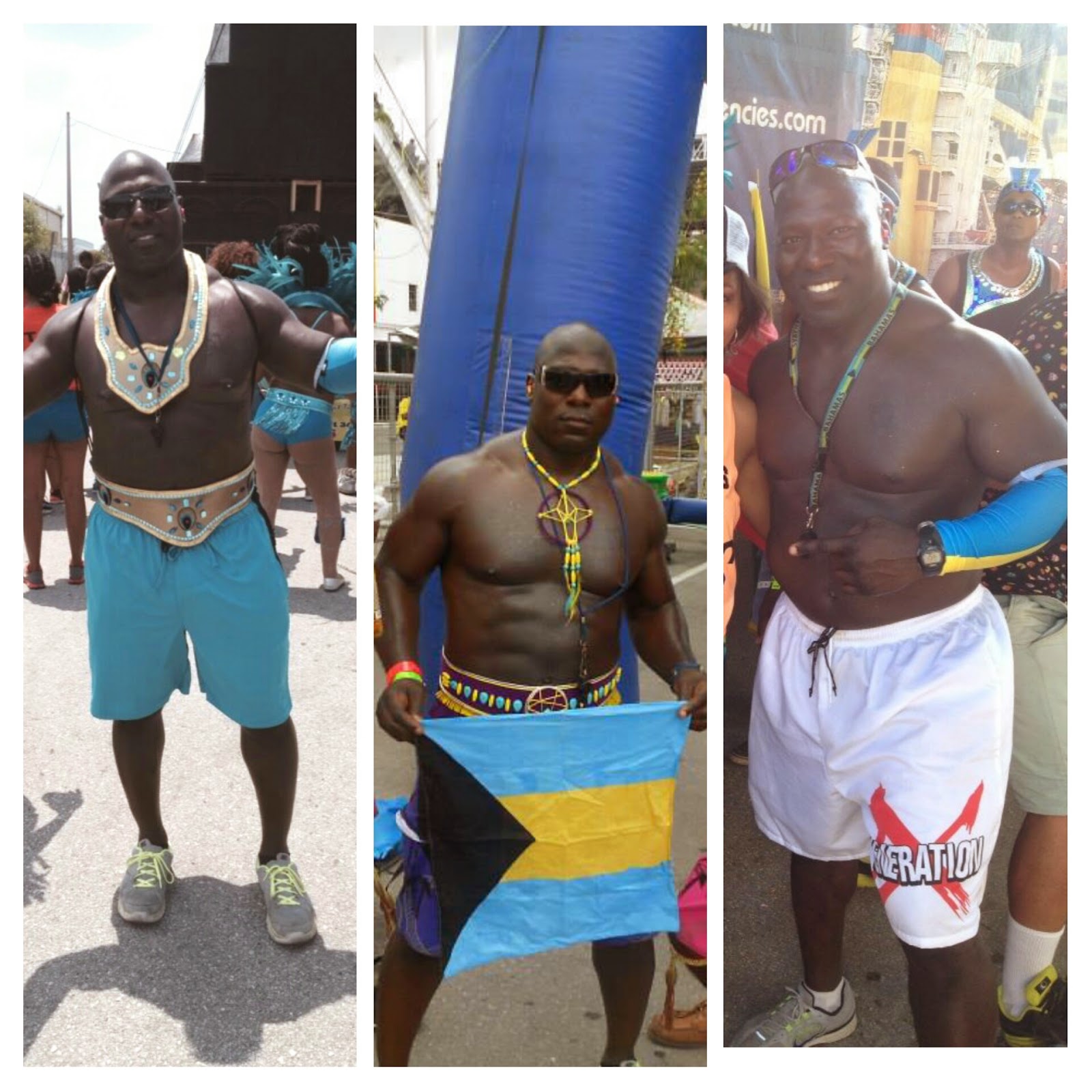 Madd Colors. Gotta shout out the leaders of my Atlanta Carnival mas band.  Linked with them in Trinidad, Raleigh, and Miami. They also took the show on the road to Houston carnival.  So if you want to play mas in Atlanta, Houston or Raleigh link www.maddcolorscarnival.com 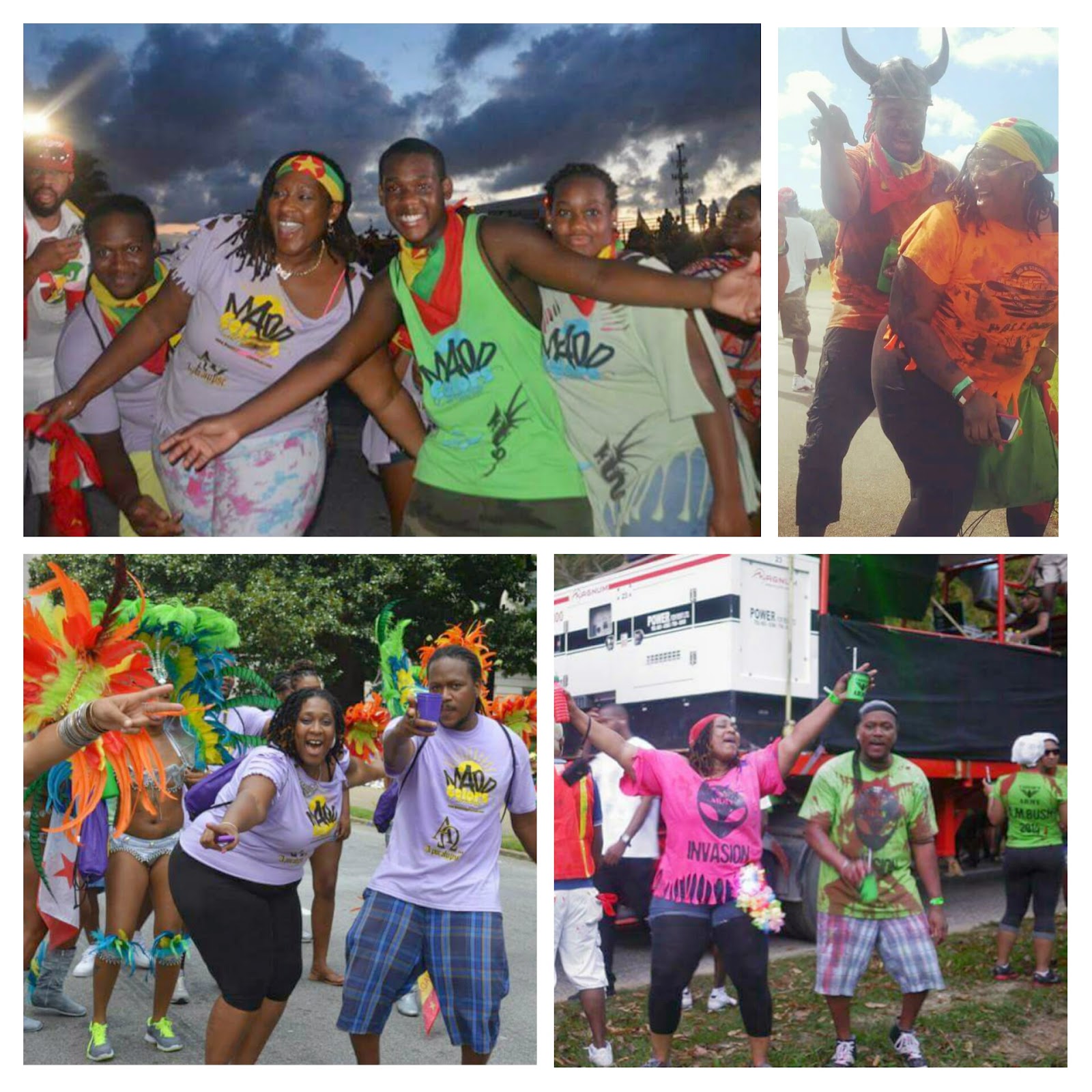 Kortney I randomly met online cause all of us carnival lovers somehow end up gravitating towards each other.  She came thru ATL for a weekend of party’n, but sadly I was unable to link up with her.  I had to share her collage as well, cause I love her love of carnival. 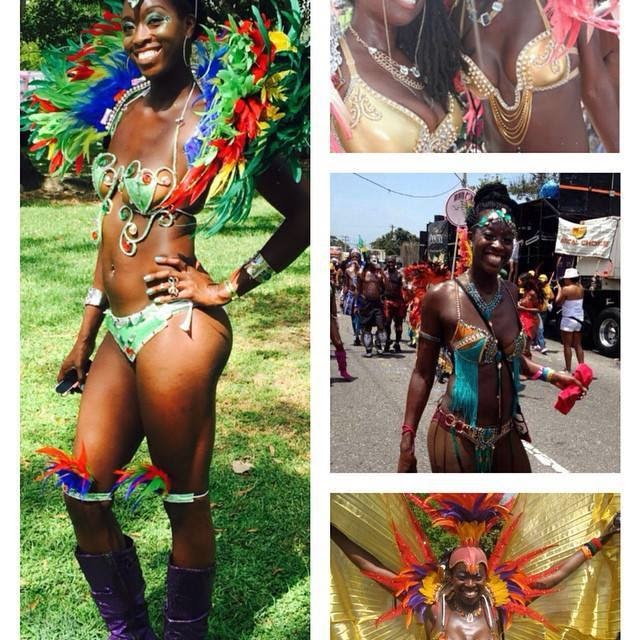 Next up are the guys that power us through the year and at carnival...  The awesome DJs.   First up is DJ Private Ryan. This guy right here I just adore, met him in person about 7 years ago and have been a fan ever since.  He is such sweet heart, its impossible not to love him.  And it doesn’t hurt that his mixes are frekkin AMAZING!!!!!  Got to link with Ryan in Trinidad, Barbados, and Miami this year.
Dei Musicale : The Musical Gods, a dynamic duo of Ruan Legend & J-Lava.  They definitely keep me jamming through the year when I’m tryn to NOT listen to soca in between carnivals.  Got to link with them in Trinidad, Jamaica, Barbados, and Miami.


And a shout out to photographer extraordinaire Craig Chung.  Saw him Trinidad, Jamaica, and Miami but sadly not get a copy of the pic we took in T&T.  If I ever get married again, I would totally hire Craig to capture it.  His pix are the sh*t!  KABOOM
And I got to meet the boss Dre in 2014. He was actually seated on the same row as me on the way back from JA carnival, but he had someone with him and I didn't want to be rude. 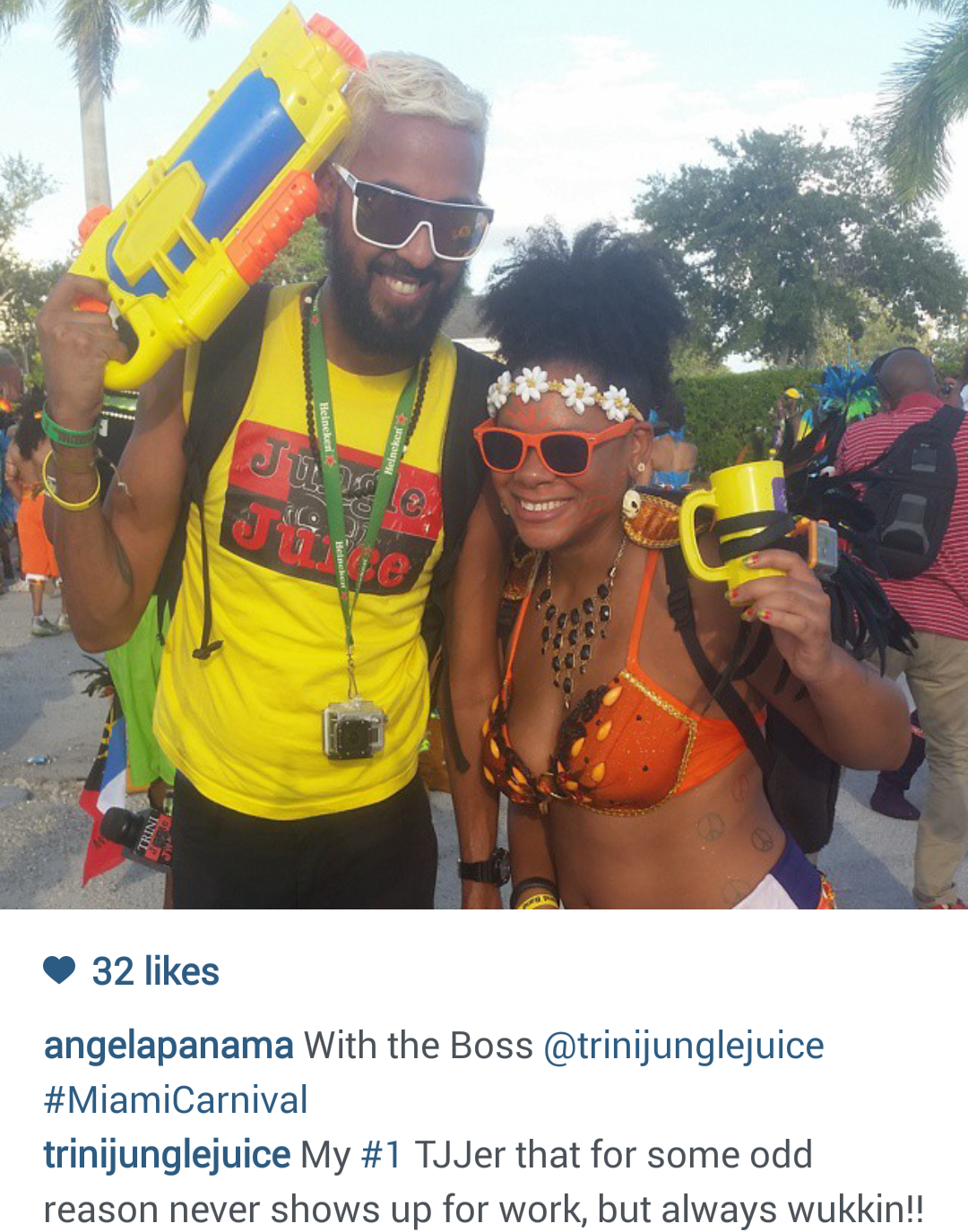 So a question I am frequently asked, “Which carnival was the best and why?”  Numbers don’t lie so I am going to let my Nike Fuel Band tell you which carnivals I had the most fun at.  Below are my Nike Fuel Points from the Road March from each carnival I attended this year.  At the bottom of each screenshot you can see how many step I took that day, you can also see what times of the day I hit my goal. I have also included a link to each carnival in case you are enticed to attend.
﻿

﻿
So what does 2015 hold?  I’m thinking Trinidad, Atlanta, Bahamas, Los Angeles, and Miami.  Might throw in a small carnival like Jacksonville or Raleigh again.  Cant squeeze in anymore big carnivals with all the other non-carnival travel I have planned.