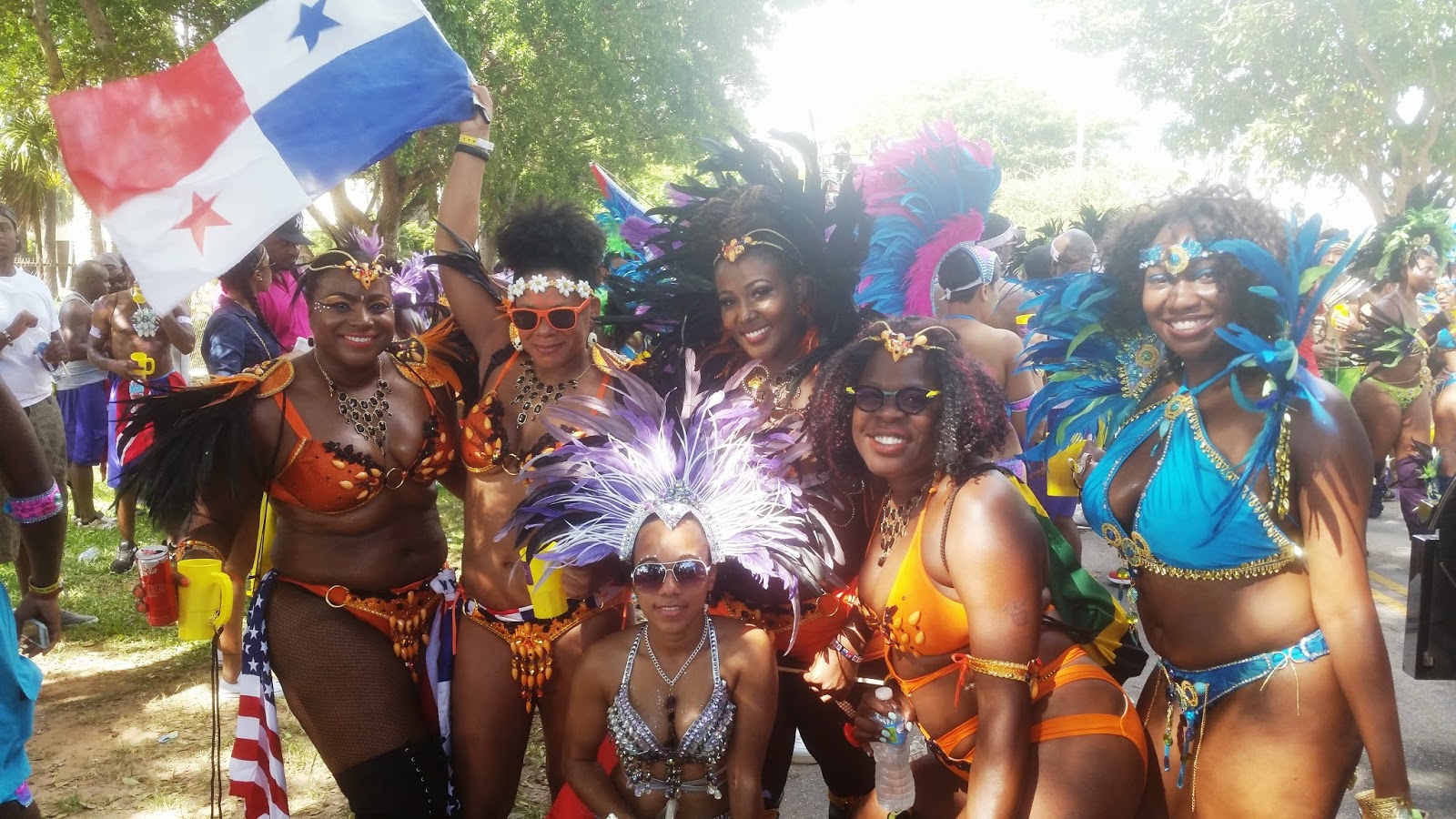 What can I say about Miami Carnival that I haven’t already said in years past???  Its my favorite North American carnival, I call it the Caribbean Reunion because so many of my friends fly in from everywhere to attend.  It’s the carnival with the most familiar faces.

Did a slightly condensed version of Miami this year, we landed late Thursday, hit up the liquor and grocery store and checked into our condo.  Rented a condo in the same building we rented last year, great location off Biscayne for a fabulous price.  Because I have already rented my condo for 2015 I can go ahead and let you guys in on my secret.  There is a condo called The Grand in which Hilton runs a portion of it as a hotel.  So you can rent a condo without having to pay all the extra fees that you pay when you rent from an owner.  And if you know me you know I almost NEVER pay rack rate for a hotel room. I will scour the internet looking for the best discount rate.  www.hiltonfamilymvp.com  ended up being like $100off EACH night for a bad ass 1,2, or 3 bedroom condo.


Anywho, upon checking in we immediately got it crack-a-lackin and went into party mode.  Some other friends stopped by and we had a pregame fete.  When putting together our fete schedule it took us a while to decide which fete to hit Thursday night.  Didn’t have that much fun at Tribe Ignite in 2013 (miss the days of it being held at the Hard Rock) so we joined some other friends at New Yorkers.  The only people that like partyin with New Yorkers is other New Yorkers, so needless to say I didn’t have fun.  Half of us left and the other half stayed. We did manage to have fun Thursday, so it’s all good. 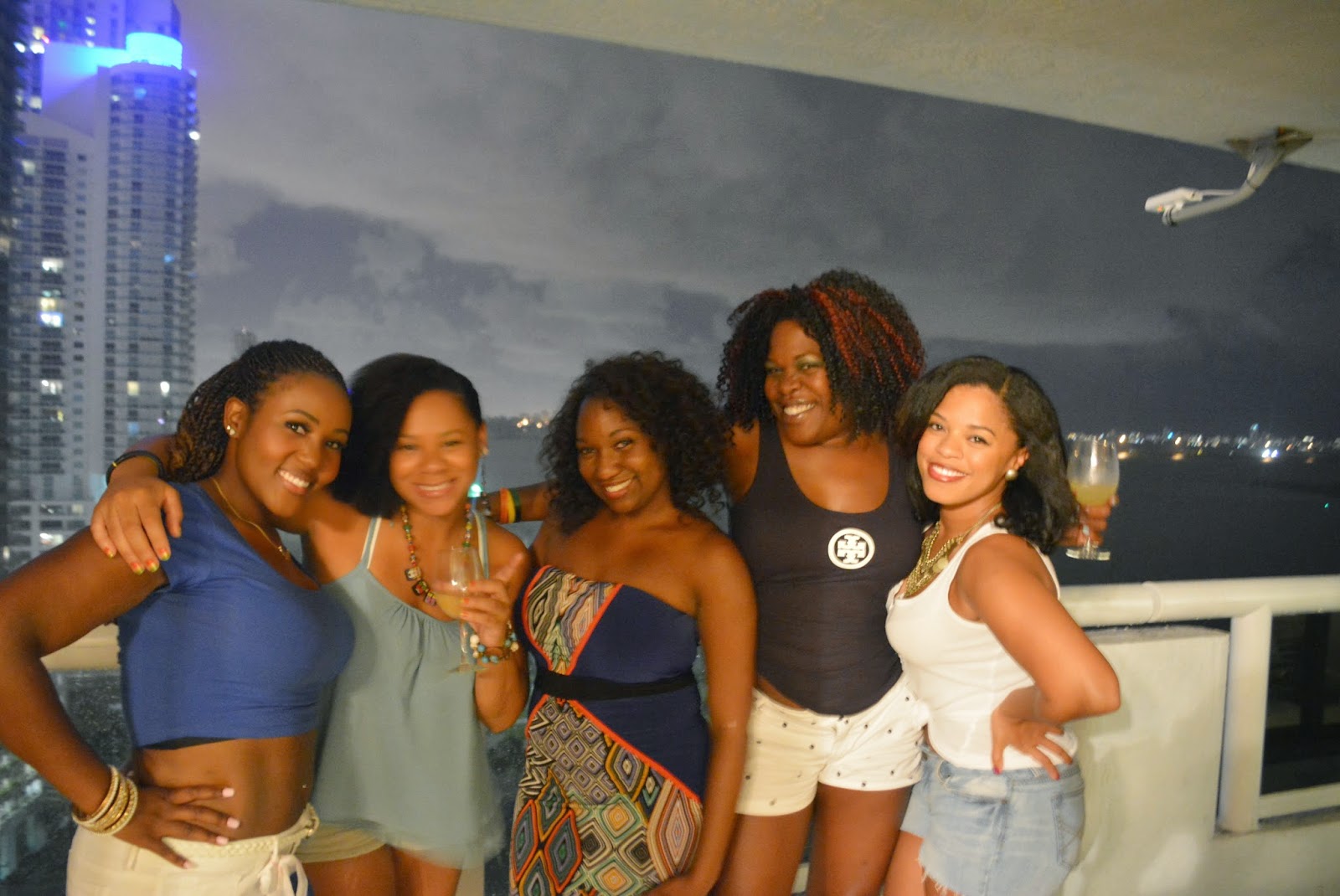 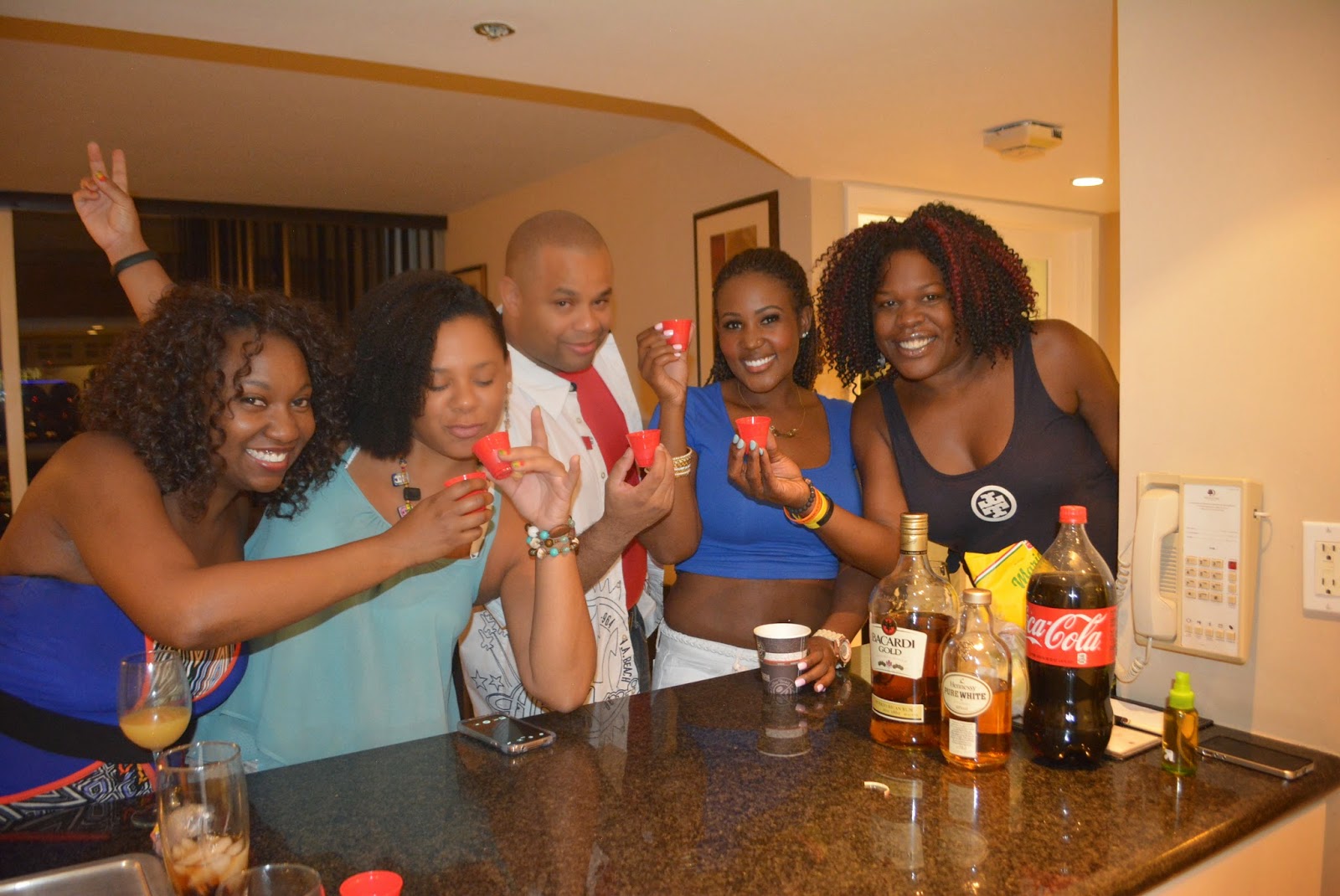 Around noon Friday we headed to Rise / Shine (always my favorite fete of the weekend). The event is held on Historic Virginia Key Beach, nothing beats a beach fete.  2012 we almost died of a heat stroke so we learned that it’s best to do the VIP route for this fete.  Tents with plenty shade, seating, open bar, cool air mists, etc.  The attire for this event is white, so it’s like a Caribbean Diddy party. 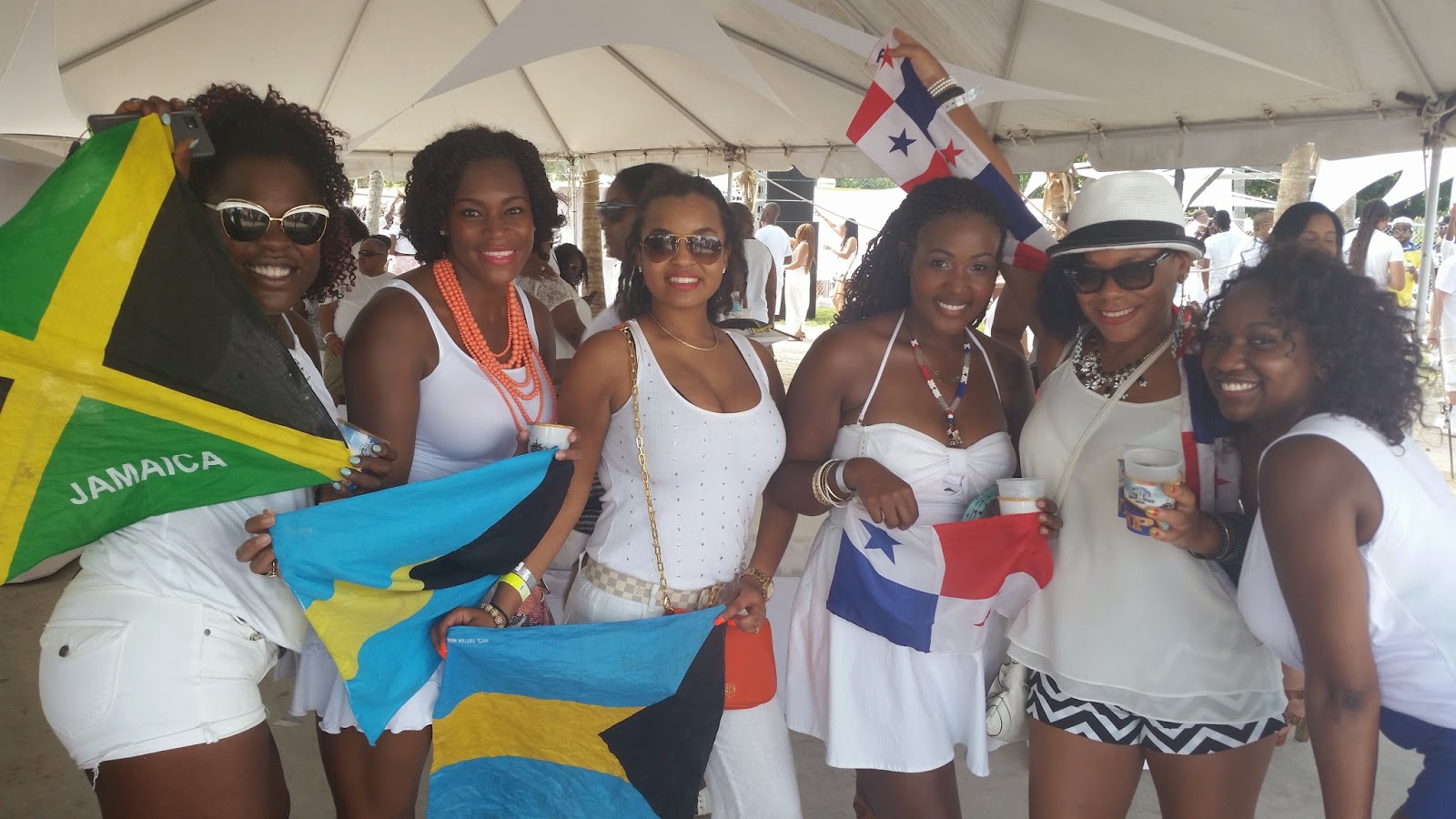 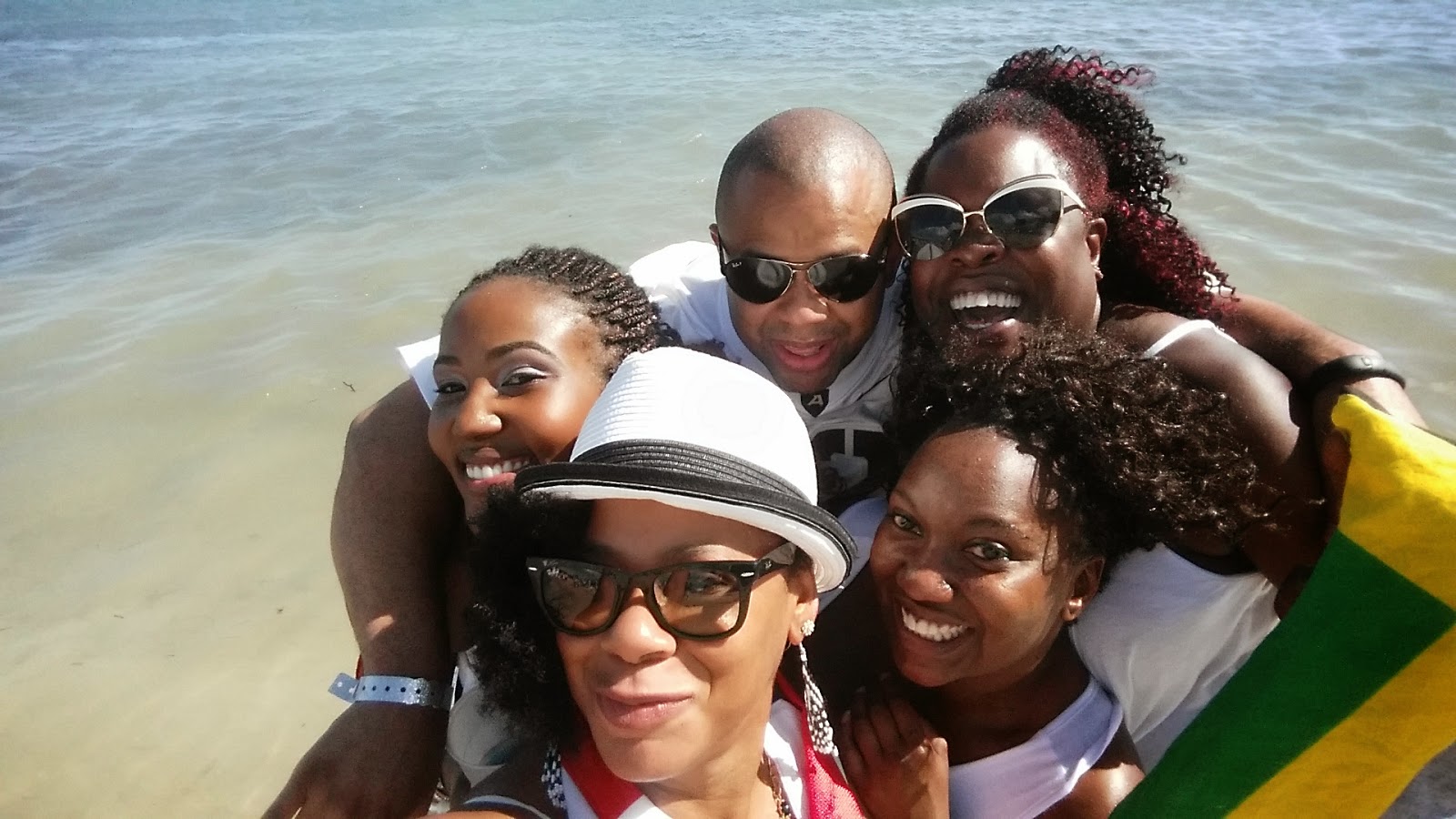 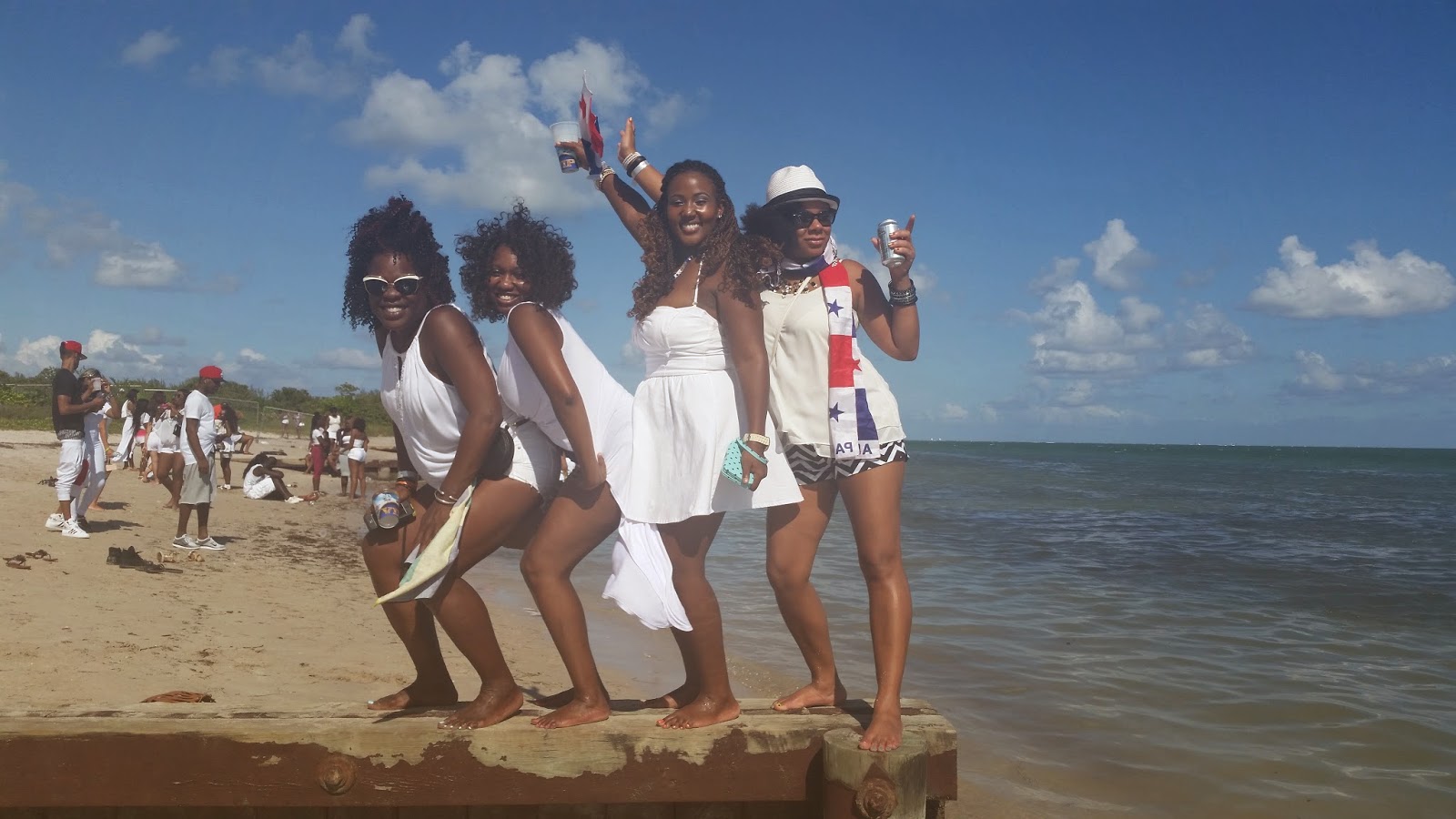 Friday evening we were supposed to have a beach fete on South Beach, but we stopped by the One Island Mas camp to pick up our costumes and that ate up all our time.  Mas camp was a hot azz mess, definitely need more staff.  Because I had so much fun with them on the road I am willing to forgive it.  I will say it was not as bad as Generation X mas camp 2012 when there were like 200 ppl in the parking lot about to fight and the cops were called out. After the One Island mas camp fiasco we ended up getting some grub and headed to bed around 10pm.

4am Saturday we headed to Vale Breakfast Fete on Jungle Island.  We skipped Vale last year to do Jouvert and decided this year to just be GANGSTA and do both #BOOM.  Vale is too great of a fete to miss, they bring the Trinidad vibes  up to Miami and it’s a dayym good time.    Free breakfast buffet and endless juice aka chasers for the rum in my flasks (cause I’m on a budget). 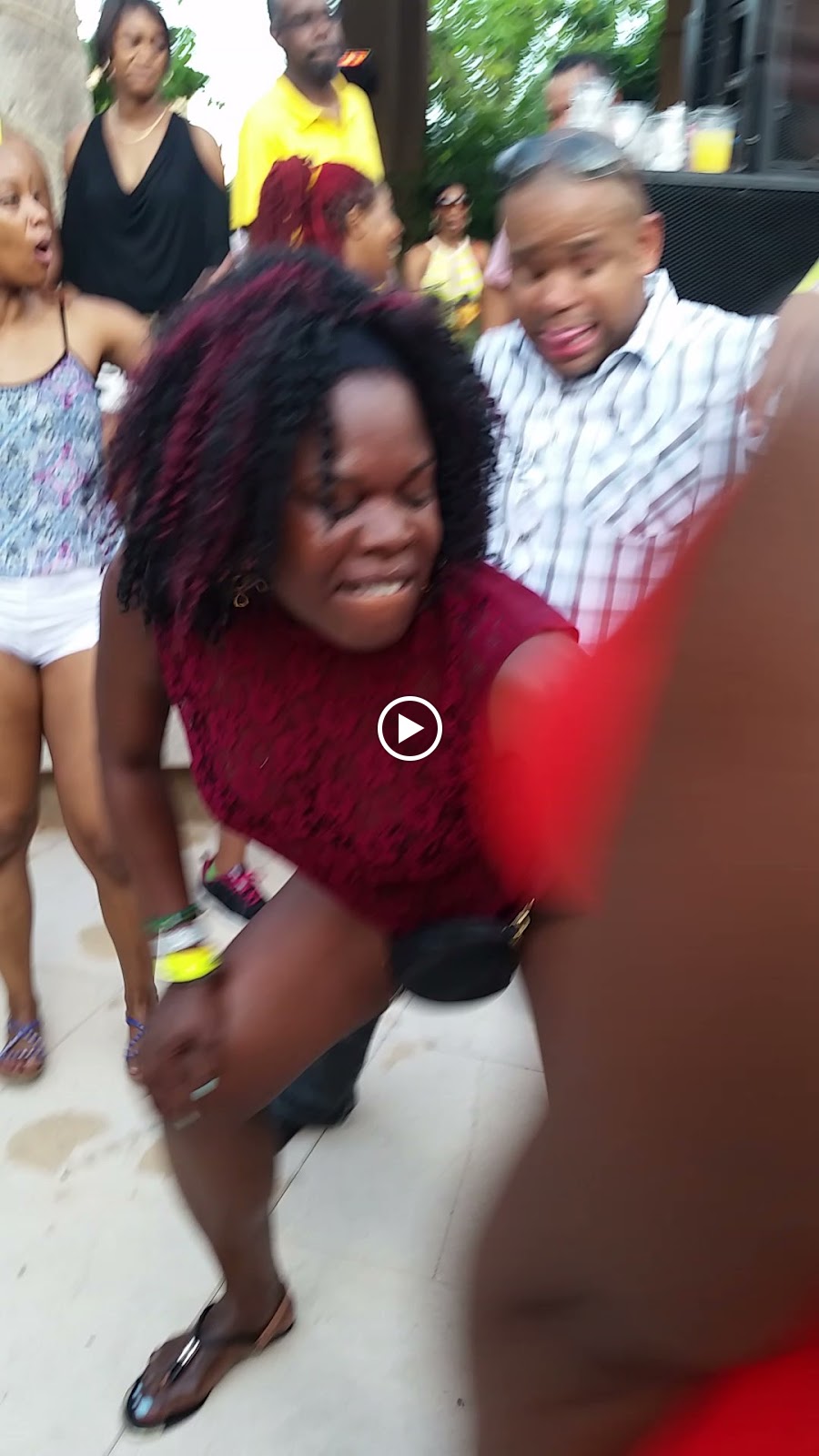 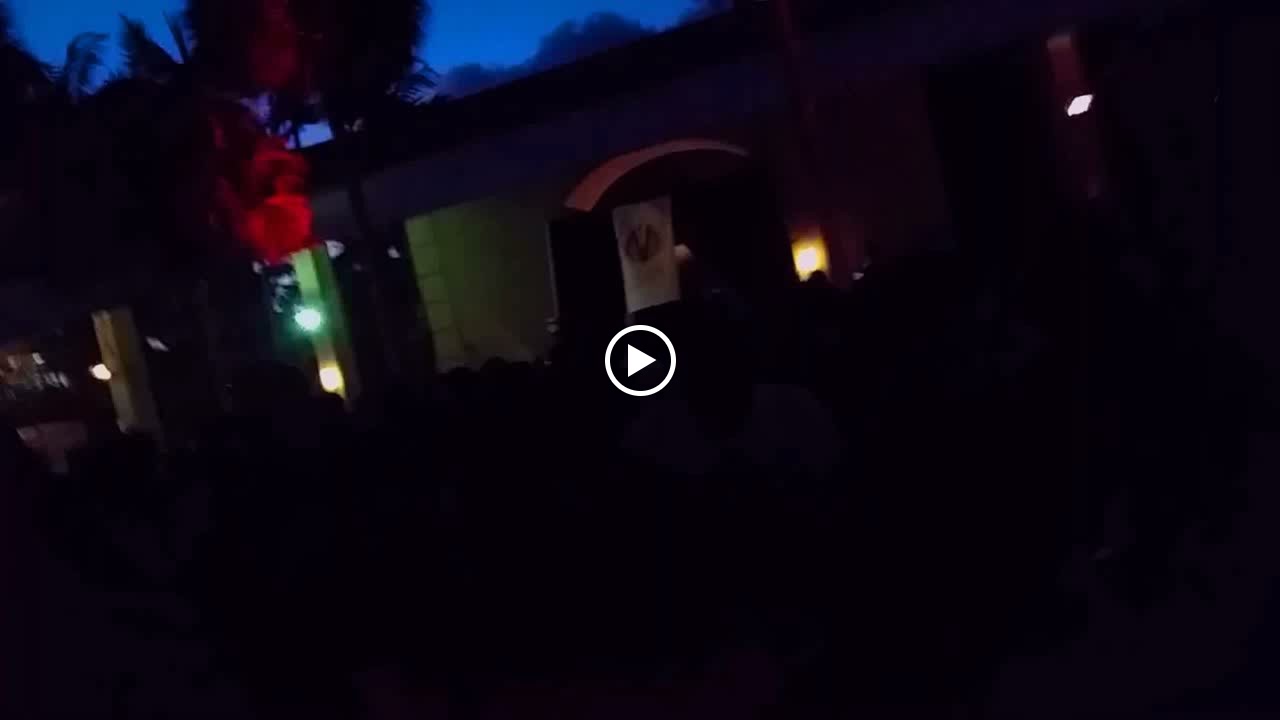 Left Vale around 9am and headed to Jouvert. I really cant speak too deeply on jouvert cause its all a blur. FOR THE RECORD I was NOT driving so… !!!  Looking at the pix I can tell that we had a DAYYM good time.  I said it before and I shall say it again, I LOVE LOVE LOVE jouvert!!!   I shall just share some pix from jouvert and move on.  OH!  I do remember wanting to cry after jouvert as I walked past McDonalds and I had no $$$, but REALLY REALLY wanted some chicken nuggets. 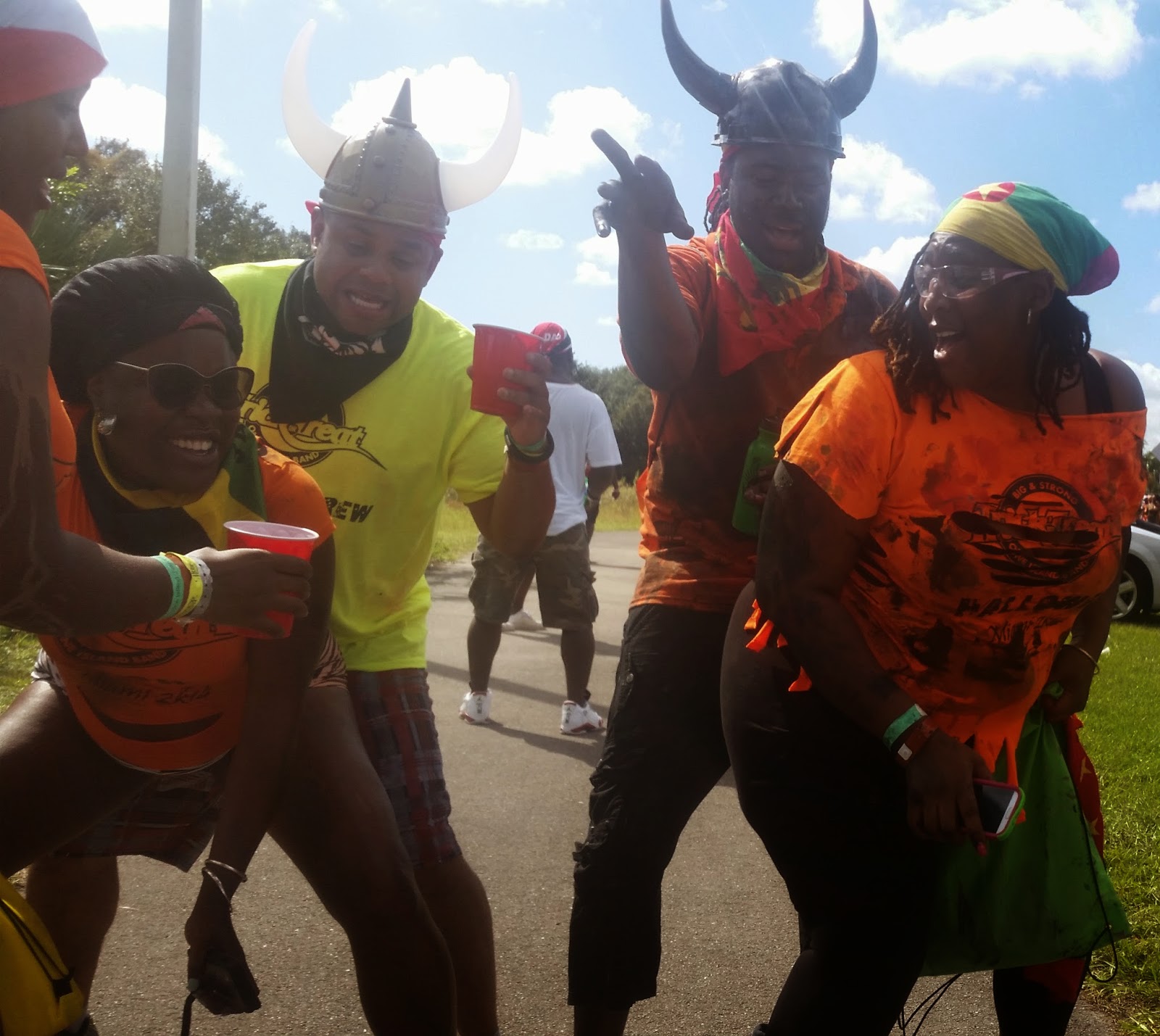 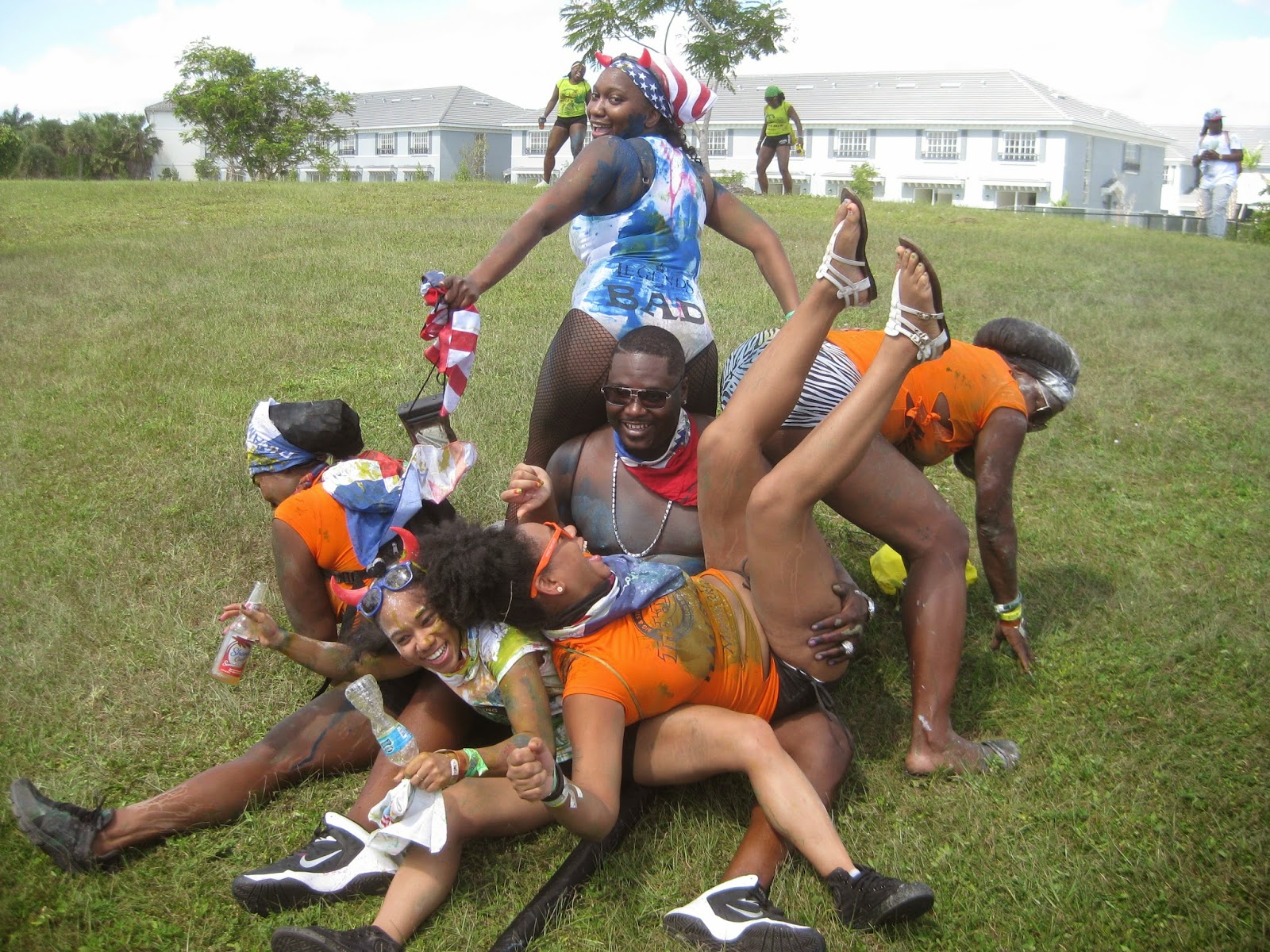 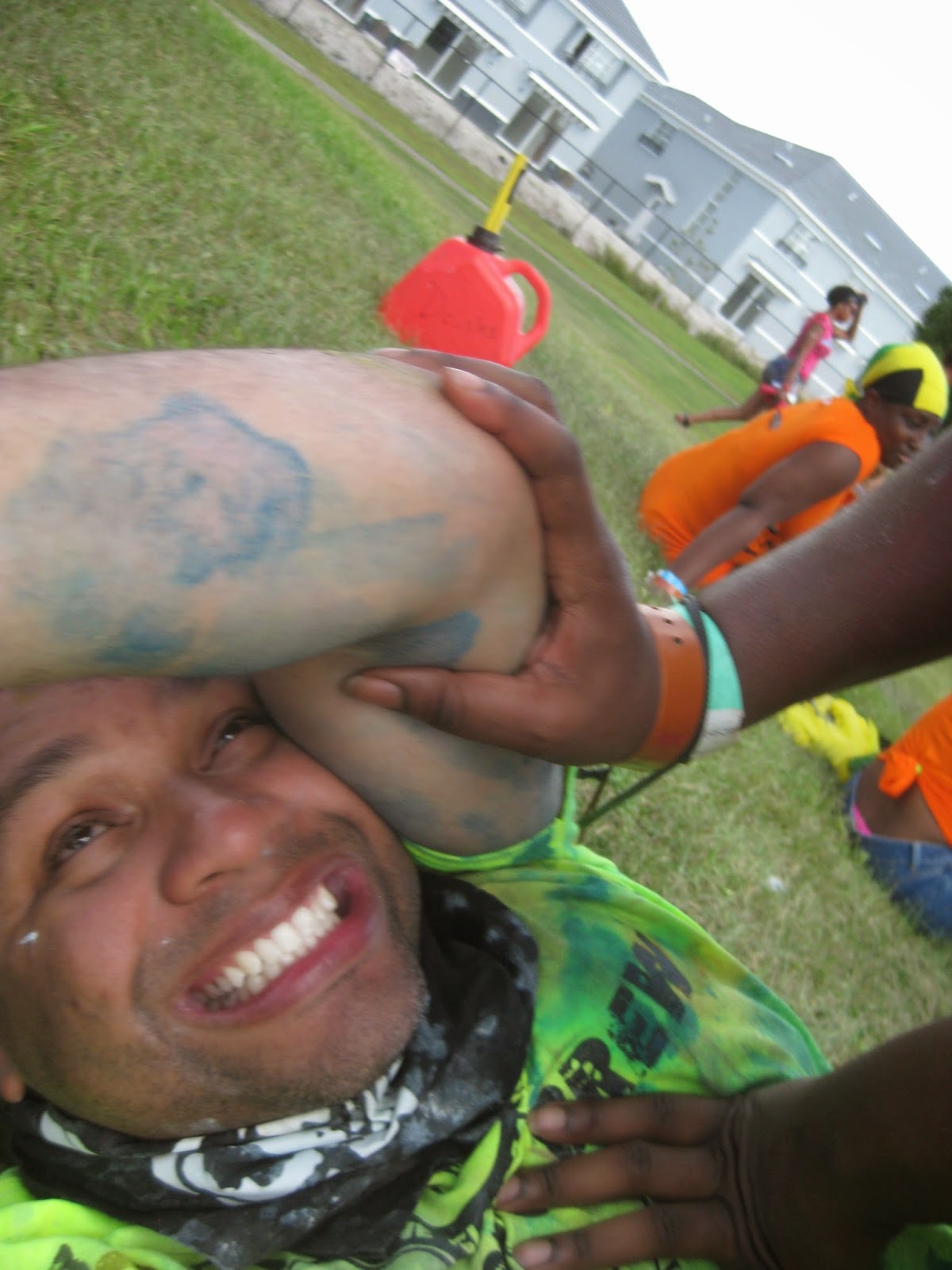 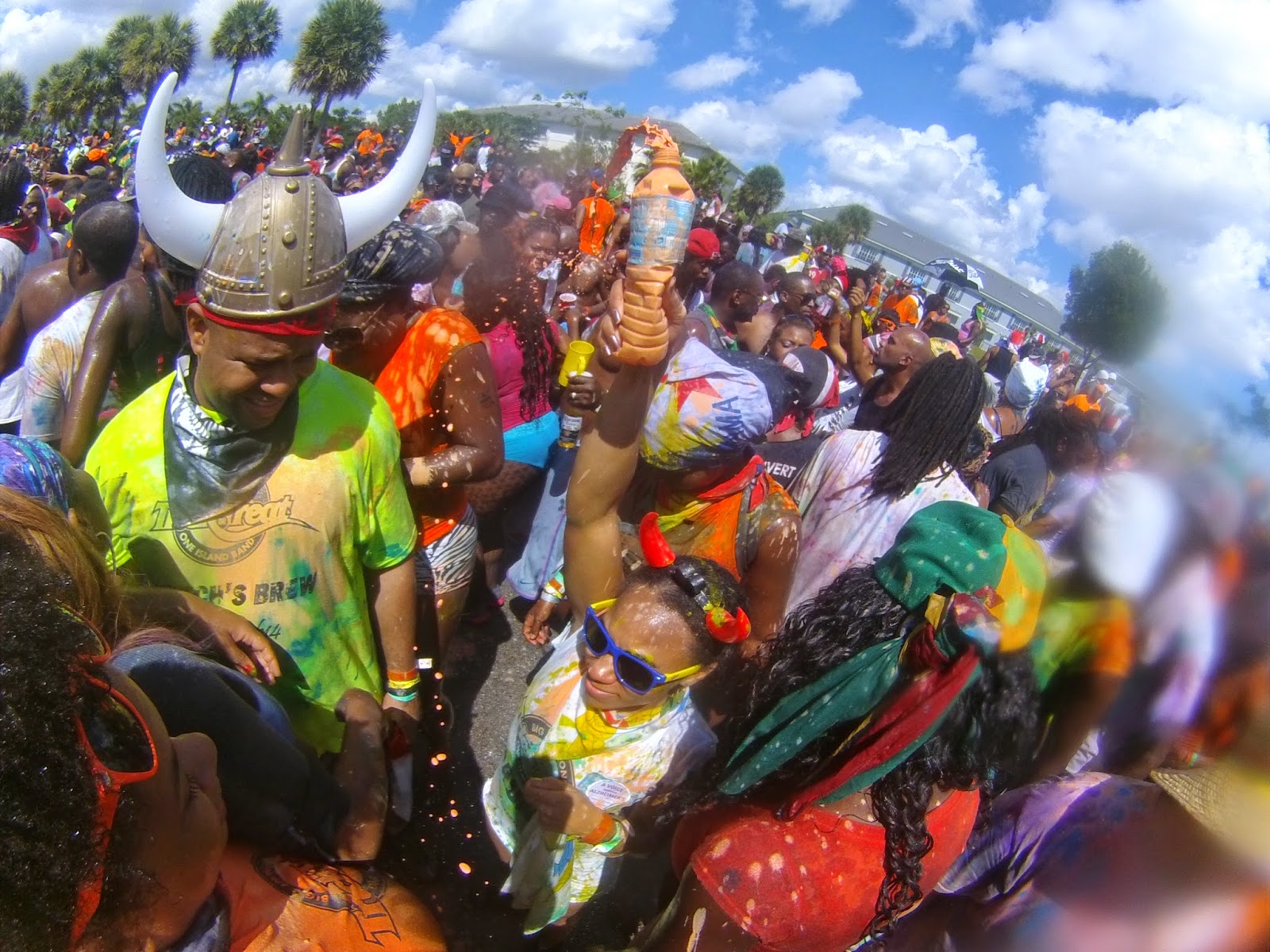 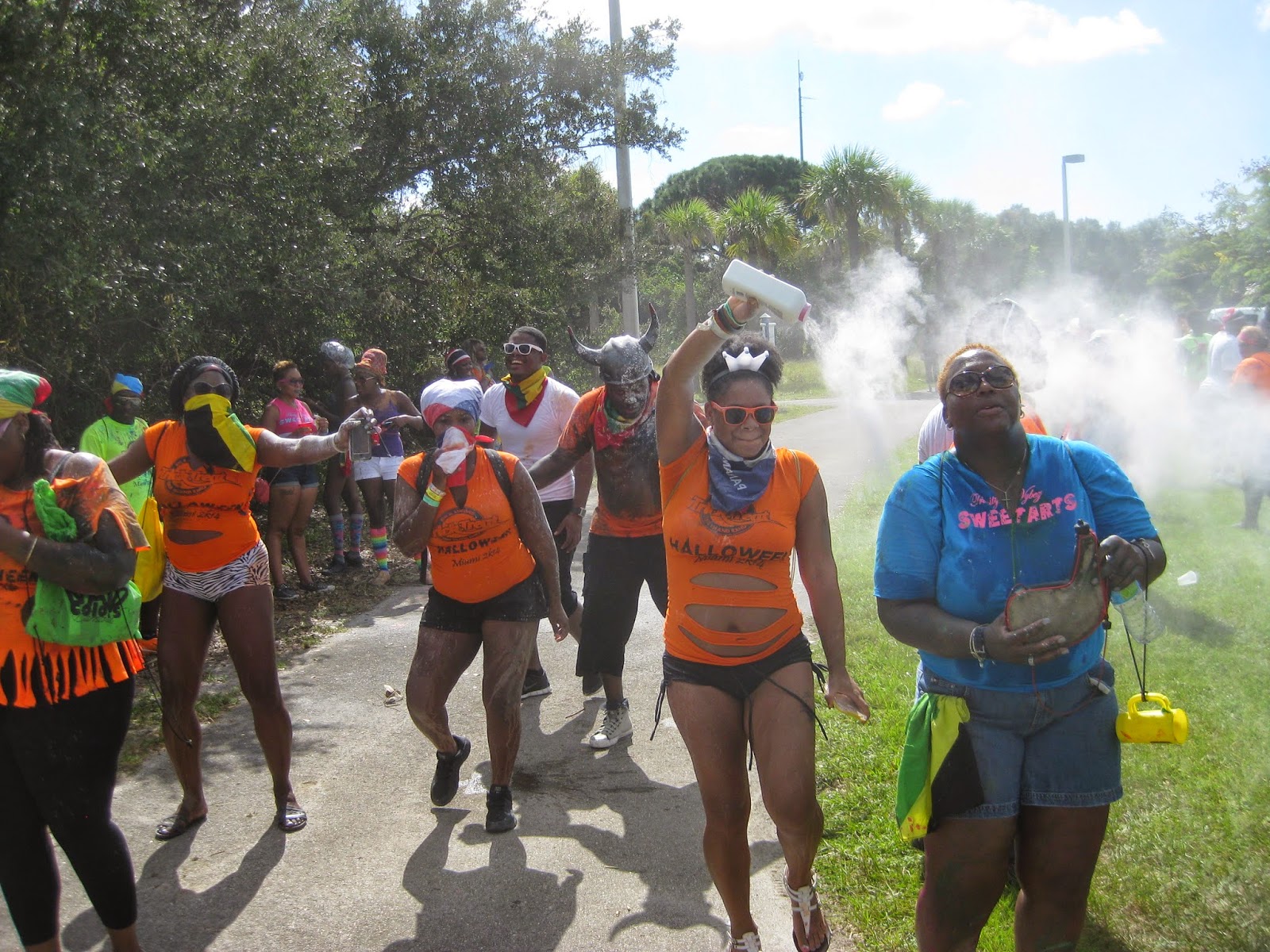 After jouvert we headed back to the condo for a quick nap to give us the energy to handle Saturday Part 3 and 4.  Guinness sponsored a Caribbean themed event Saturday called Live It Up which I convinced the crew to throw in our already hectic schedule.  When I’m back home in Atlanta, I live for sponsored alcohol events ( like I said, I’m on a budget).  We only stayed at the Guinness event for about 2 hours cause the Big Kahuna Scorch was up next.

Scorch was a hot dayym blast!!  The event was held at Solare Garden, I was initially fearful of bathroom situation there cause last year those bathrooms made you want to slit ur wrists.  The bathrooms were under control this year and that was a good thing cause Good Gawd drinks were flowing, did I mention the event was All Inclusive? I am confident that the crew enjoyed their jam packed Saturday, I know I did!!! 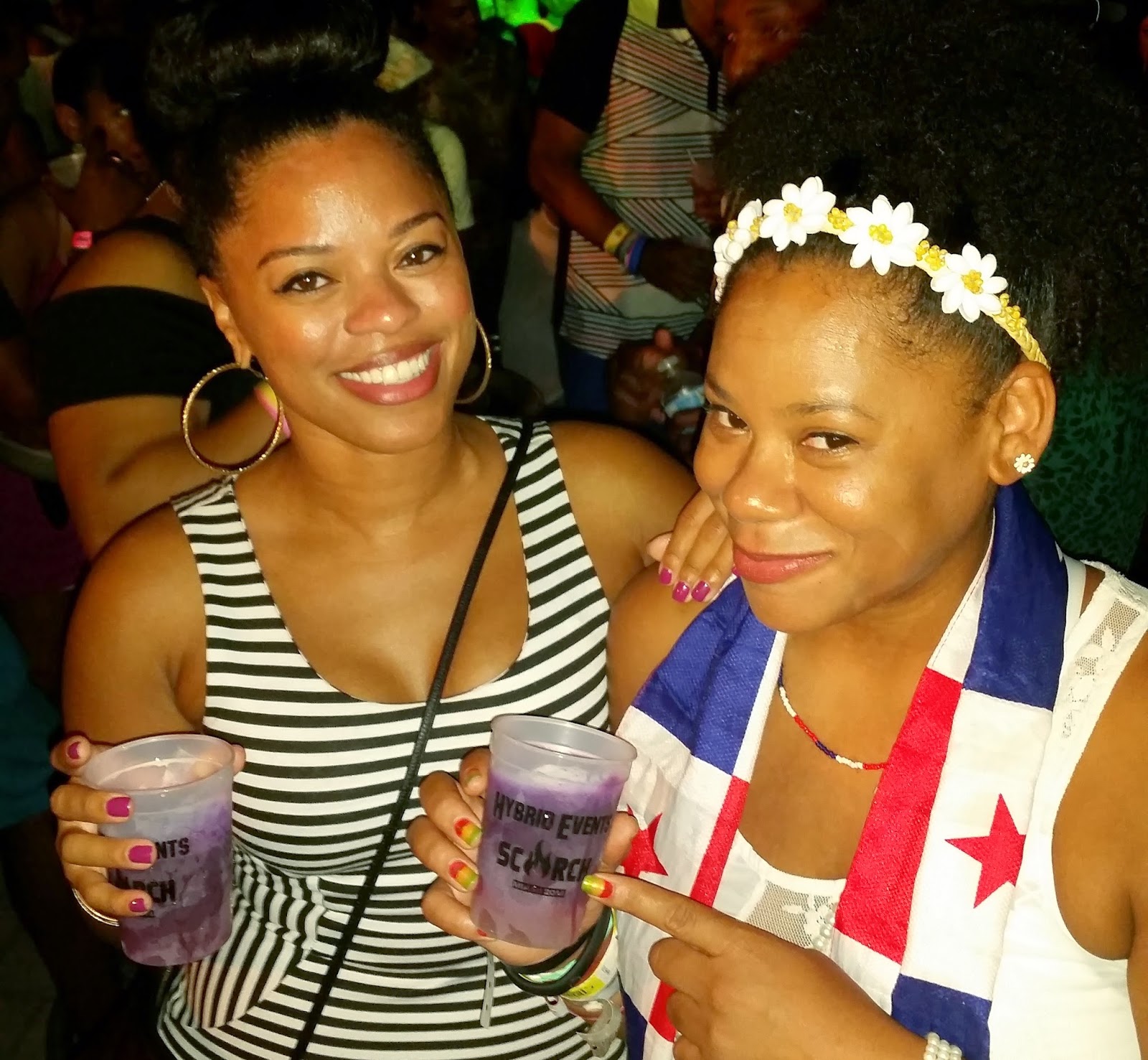 Sunday it was time for the Big Show.  Lemme just say that all my fun caught up with me on Sunday and I woke up In Ah MESS!!!  I did however eventually get my life together in the early afternoon and had the time of my frekkin life.  The new Miami carnival parade route was a WIN WIN WIN!!!  It was so much better Sun Life Stadium, funny how fate made us switch locations but gave us something 10x better.  We were out there bout 1pm-9pm and had nonstop fun.  One Island Mas Band for the win.  Like Rupee said, “Look at PEOPLE!!”  By the end of the day One island was an endless sea of people.” The liquor never ran out, the food was late as hell, but its all good.  The DJs were amazing, the sound system was superb, the masqueraders Came Out To Fete and the stormers were well behaved and just wanted to  havefun!  Carnival Sunday was too much fun, I’m not even sure if that level of fun is legal.  Better keep this on the low 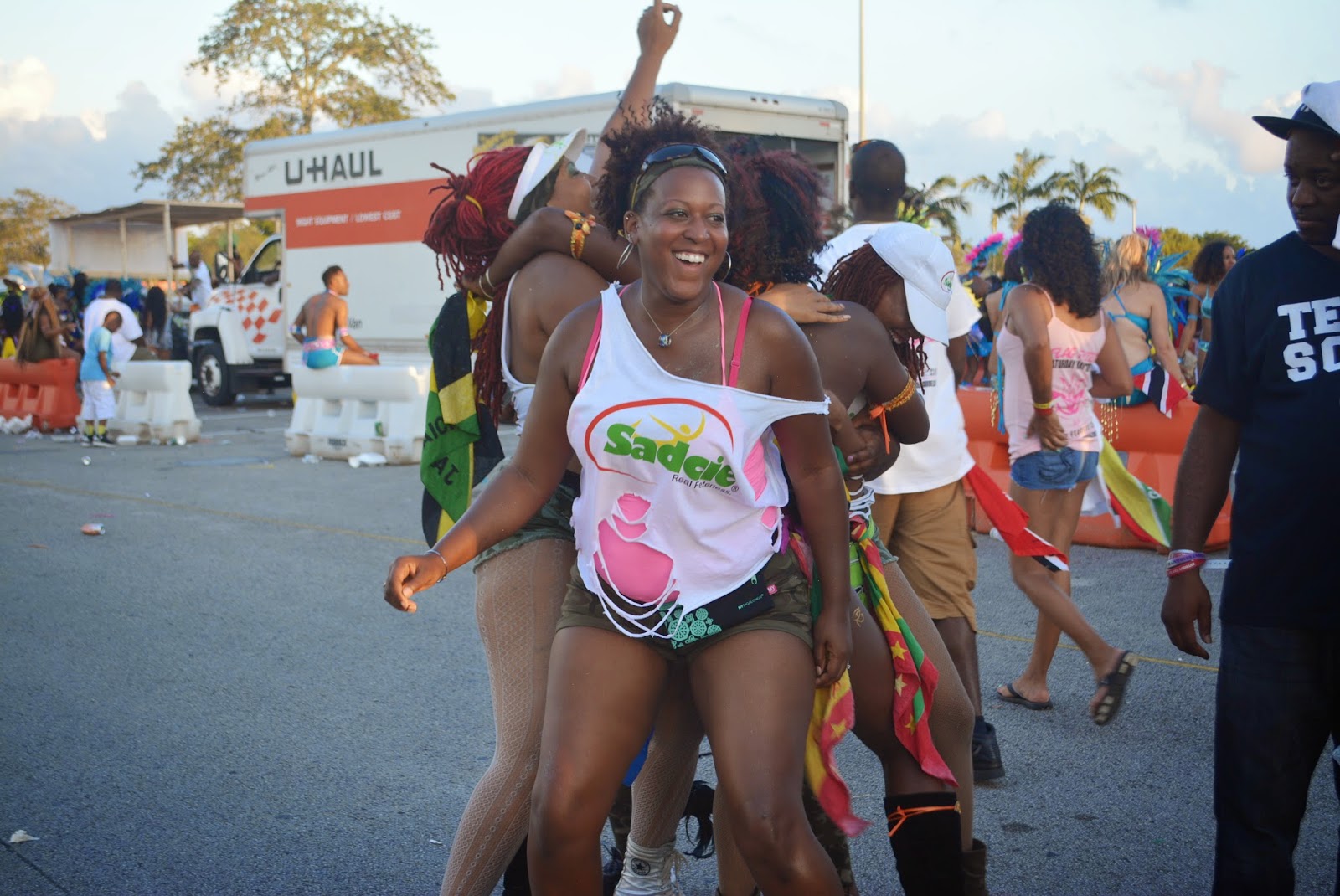 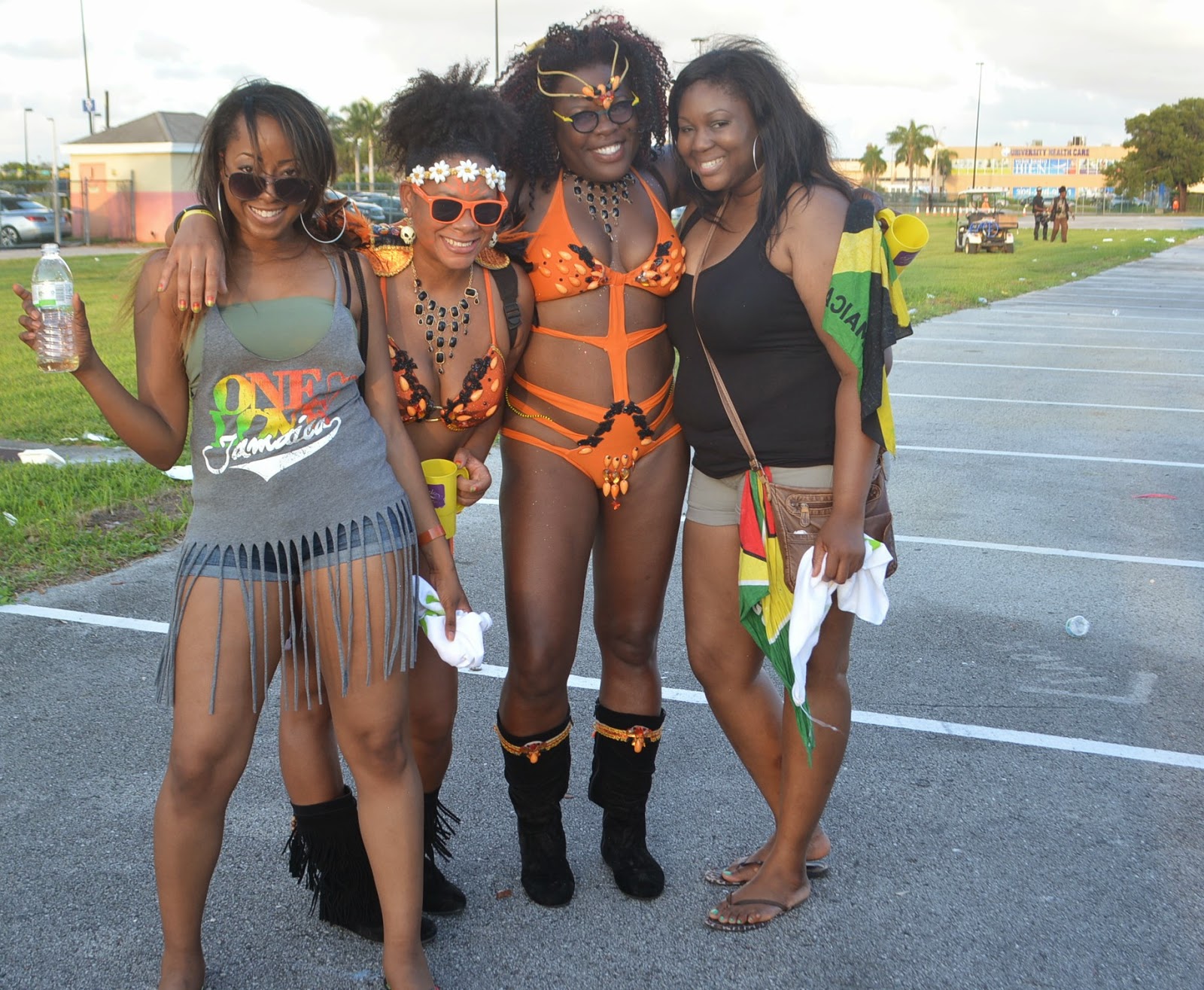 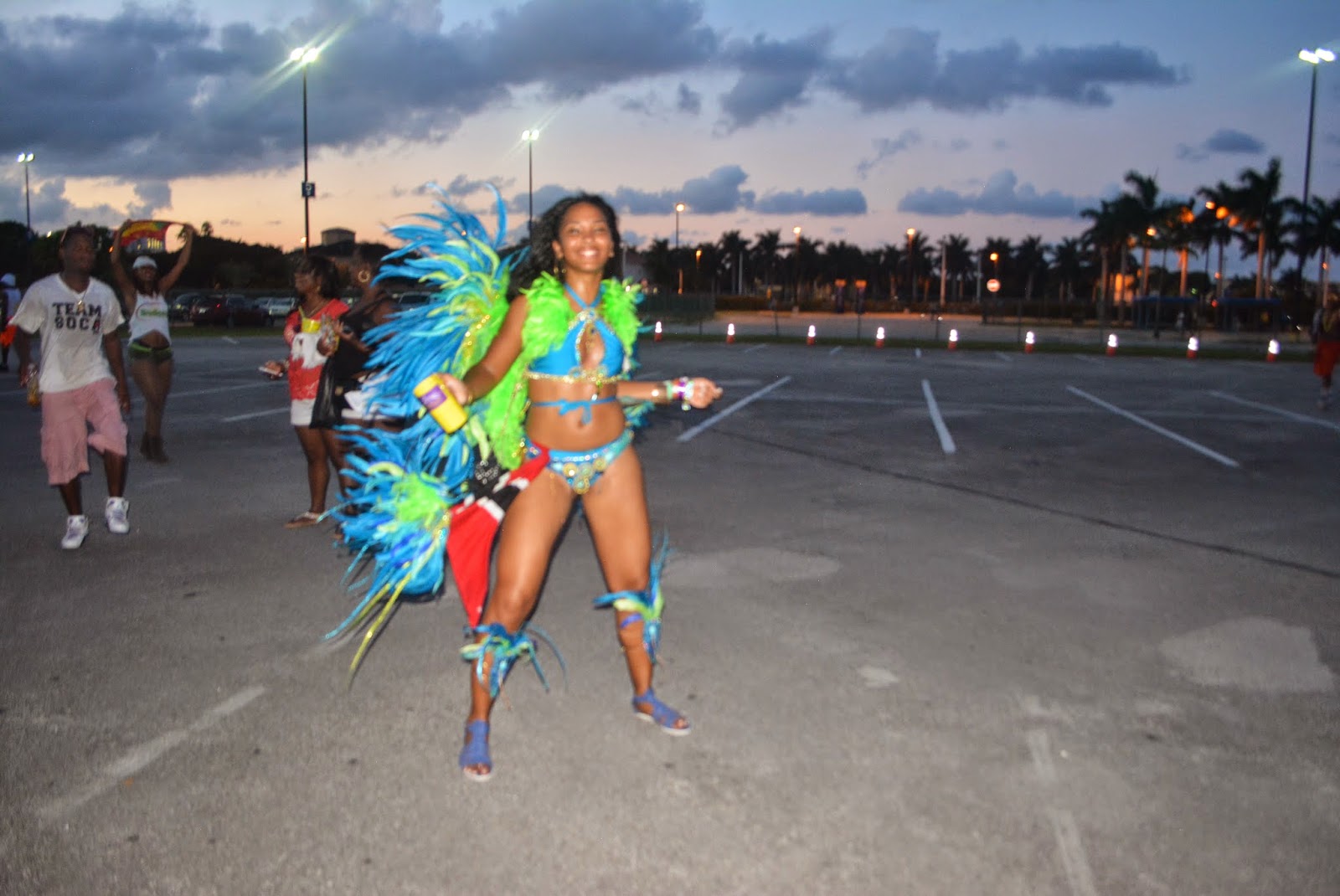 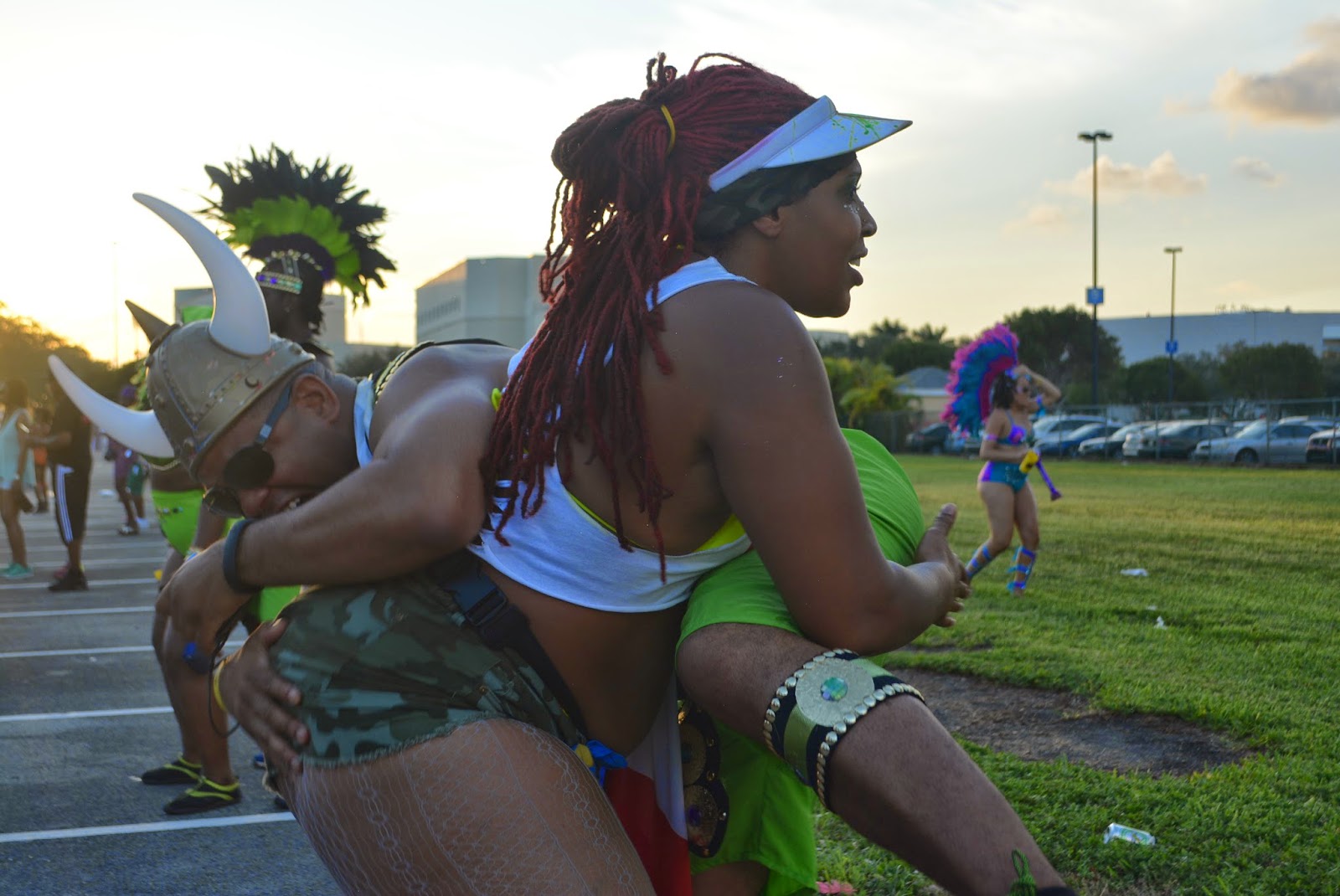 Sunday evening we were beyond exhausted from 8 hours of Bend Ups, pelvic thrusts, 6:30s, jooks, jump & waves, etc, etc, etc. So you already know that the only place we went Sunday night was to bed!!!   We did however manage to get up around 6am Monday and head to a party at King of Diamonds. If you know anything about Miami you know that King of Diamonds is a massive compound for people who love strippers and if you know me you know I despise strip clubs, what a conundrum. Luckily the strippers were all home resting and we had the venue to ourselves.  The party was aiite, we only stayed a couple hours. 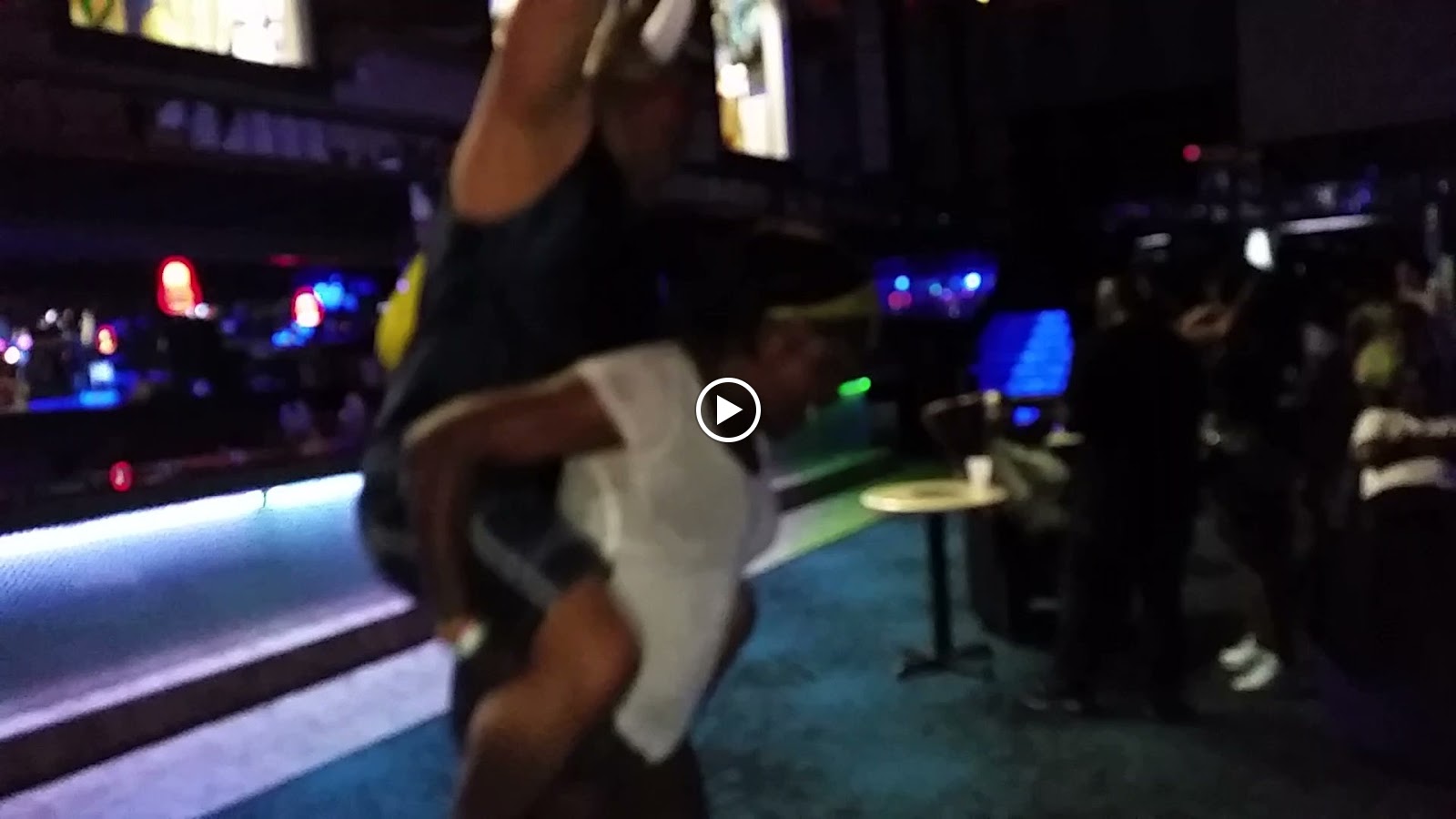 Back to our condo to check out and then off to S. Beach to have some Fat Tuesday, whip out the Bose speakers and have a Beach Fete. Relaxing afternoon on the beach before we headed to the airport and parted ways.  Last year we stayed till Tuesday, but Monday ended up being a BLA party day as well.  Unless we find something awesome to do on Monday near year we will probably depart early again. 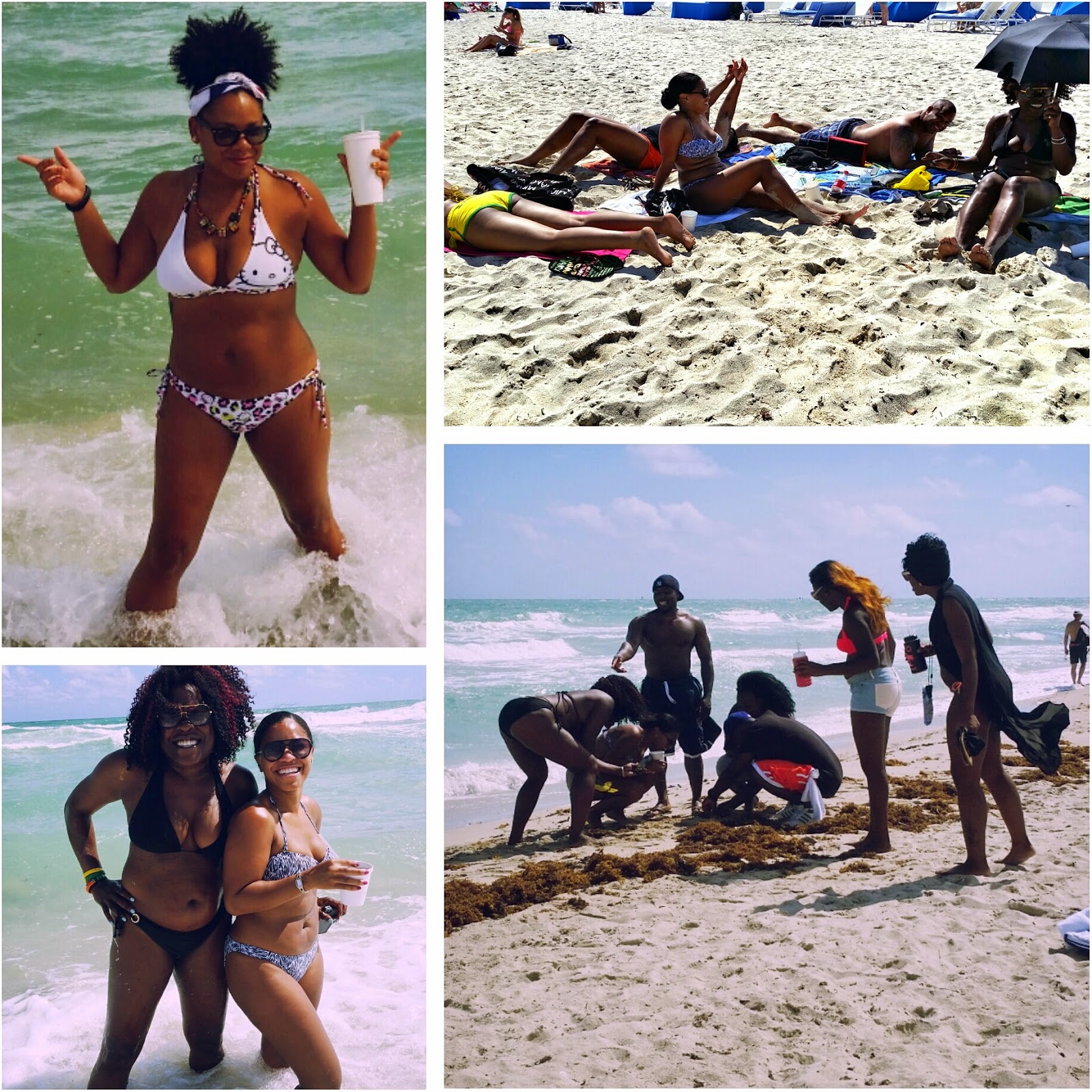 It was 5 days of nonstop good times, Caribbean chunes, champagne, rum, and wotlessness. See you in 2015 Miami, carnival not missing me!!!  Of course I leave you with a recap video.  Sorry for the low quality, YouTube is being a hater of my awesomeness. 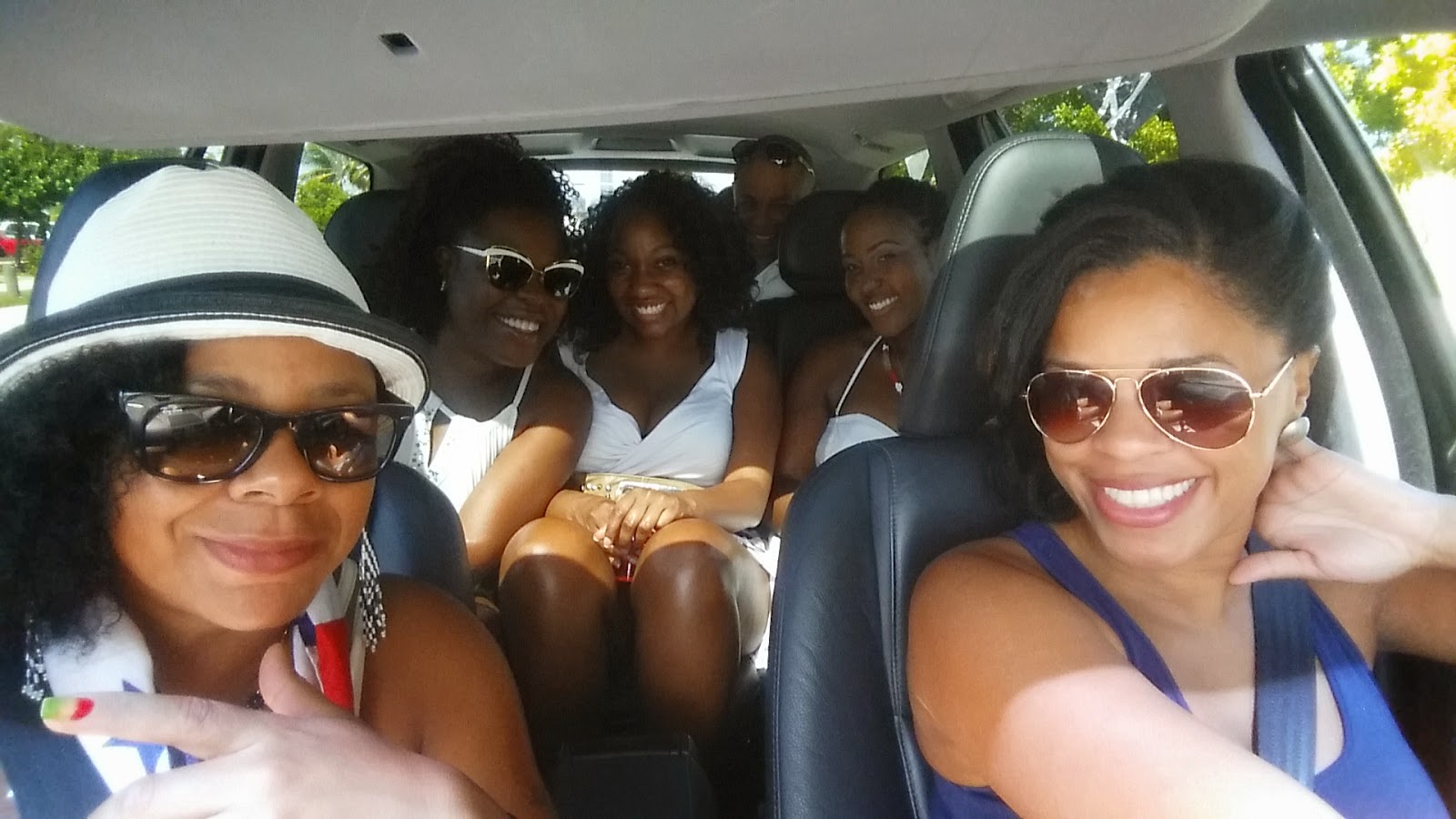 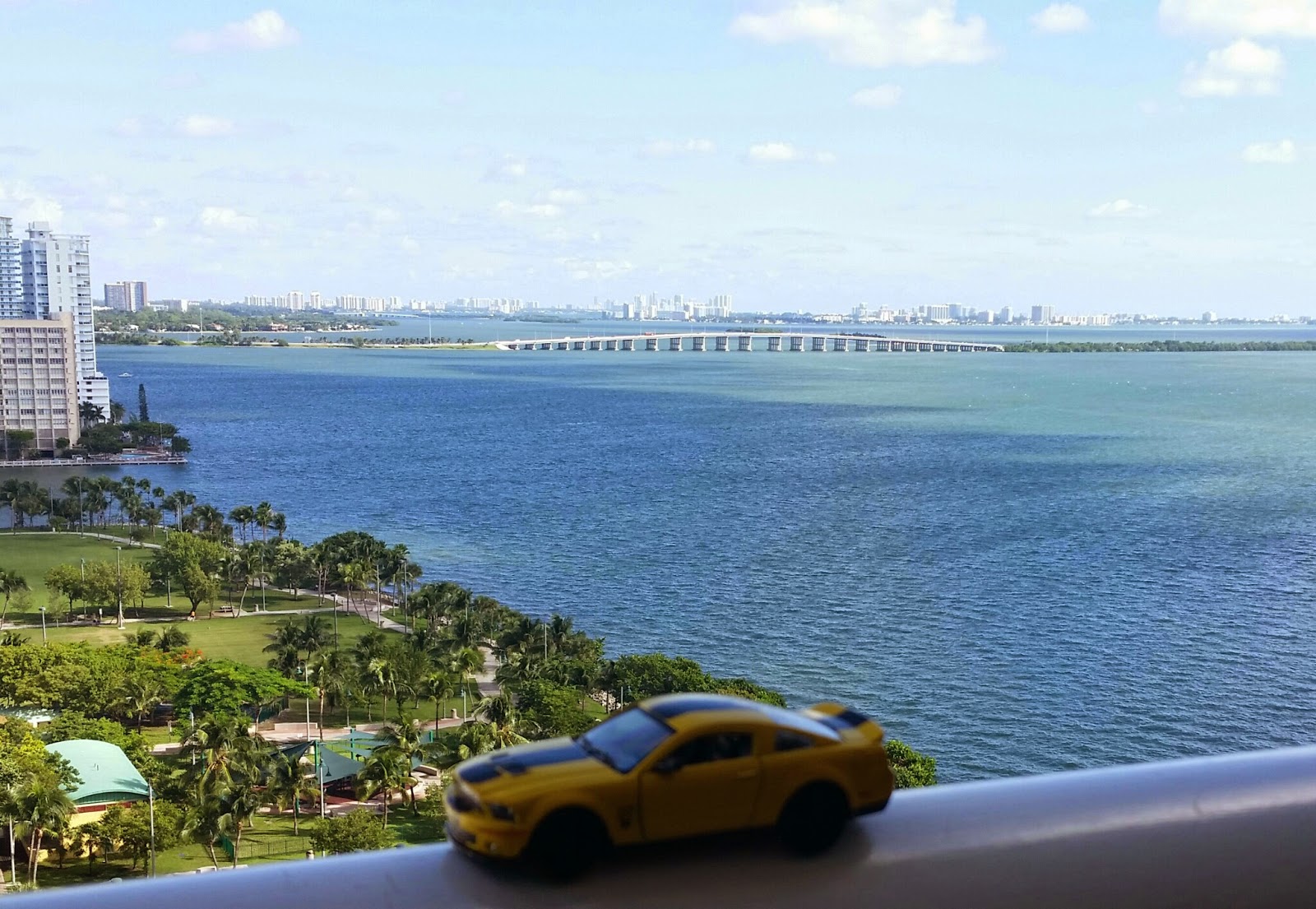 My American friend (who is not really into carnival) attended her first Miami Carnival and this was her thoughts on it.
﻿ 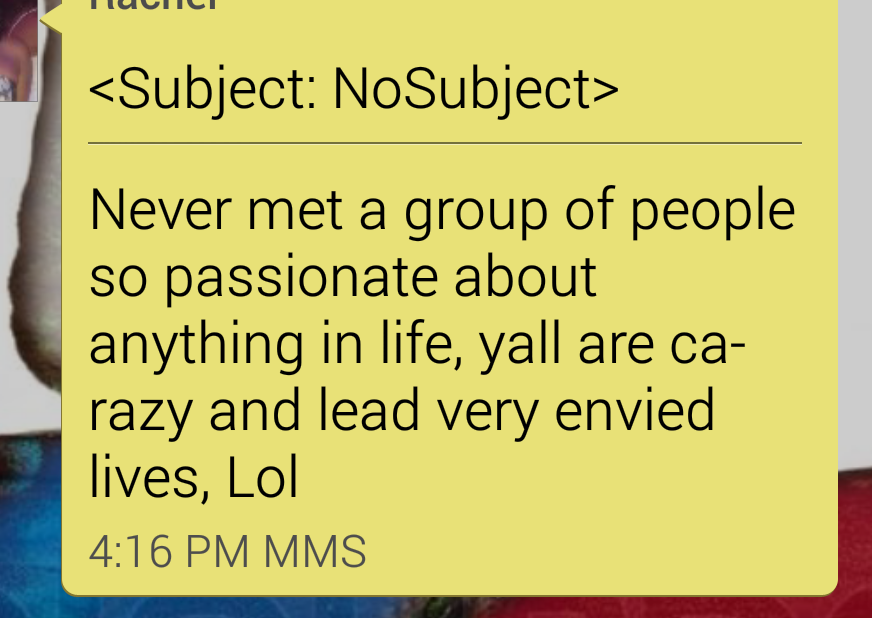