The Good:  It’s rare that I hit a carnival where I am able to party and also relax.  I usually party my life away and come home feeling like I need a vacation from my vacation.  I got to actually take in the splendor that is Barbados.  Would you believe I’ve been to Trinidad six times and have yet to chillax in tropical paradise of Tobago (that will all change 2015).


The Bad:  I was on the road carnival Monday asking myself, “How long has Barbados had a carnival?  Seems like they are rather new to this rodeo.”  Lot of amateur type mistakes.


The Ugly:  I had a good time, I had a REALLY good time, but when you put all things into perspective Crop Over just didn’t produce enough bang for its buck.  Once Crop Over crossed the $2,000 threshold it was encroaching on Trinidad territory.  I never compare any carnival to Trinidad, but Crop Over asked for it with that price tag.  It just didn’t produce $2K worth of (or Trinidad type) fun.
As LehWeGo says, "Do the Triple!"  (3 big carnivals TnT, JA & BIM). My peeps & I all landed in Bridgetown, Barbados early Thursday afternoon, rented our car and headed to our 3 bedroom villa on Surfer's Point.  We rented this lil car with no doors that we named Meep Meep (like the Road Runner sound), I would never step foot in that car in the USA, but it was rather fun getting lost in the islands in it.  Wrong move coming down a curvy road and you might go flying out the frekkin side.  Anyway, we got settled in our lil villa briefly then headed to Lush cooler fete at Pollards Mill.  It was a beautiful location where people have weddings and sh*t like that.  As you can see, everyone drank, drank, drank and danced their dayym lives away.

8am the next morning we headed to Canboulay, for those that aren’t familiar it is a jouvert.  You already know Angela Panama LOVES jouvert.  Sorry I had to slip into third person so you know just how crazy I am about jouvert.  It started off slow as most Caribbean events do.  Not because of the promoters, but because Caribbean people just have no concept of time.  Around 10am there were plenty people running around dutty dutty dutty.  The event was held on the beach so I slipped out for about an hour to sit on the beach and enjoy the view.  This is apparently when everyone got OUTTA CONTROL and had absolutely no behavior.  I just heard rumors tho, haven’t seen any photo evidence. 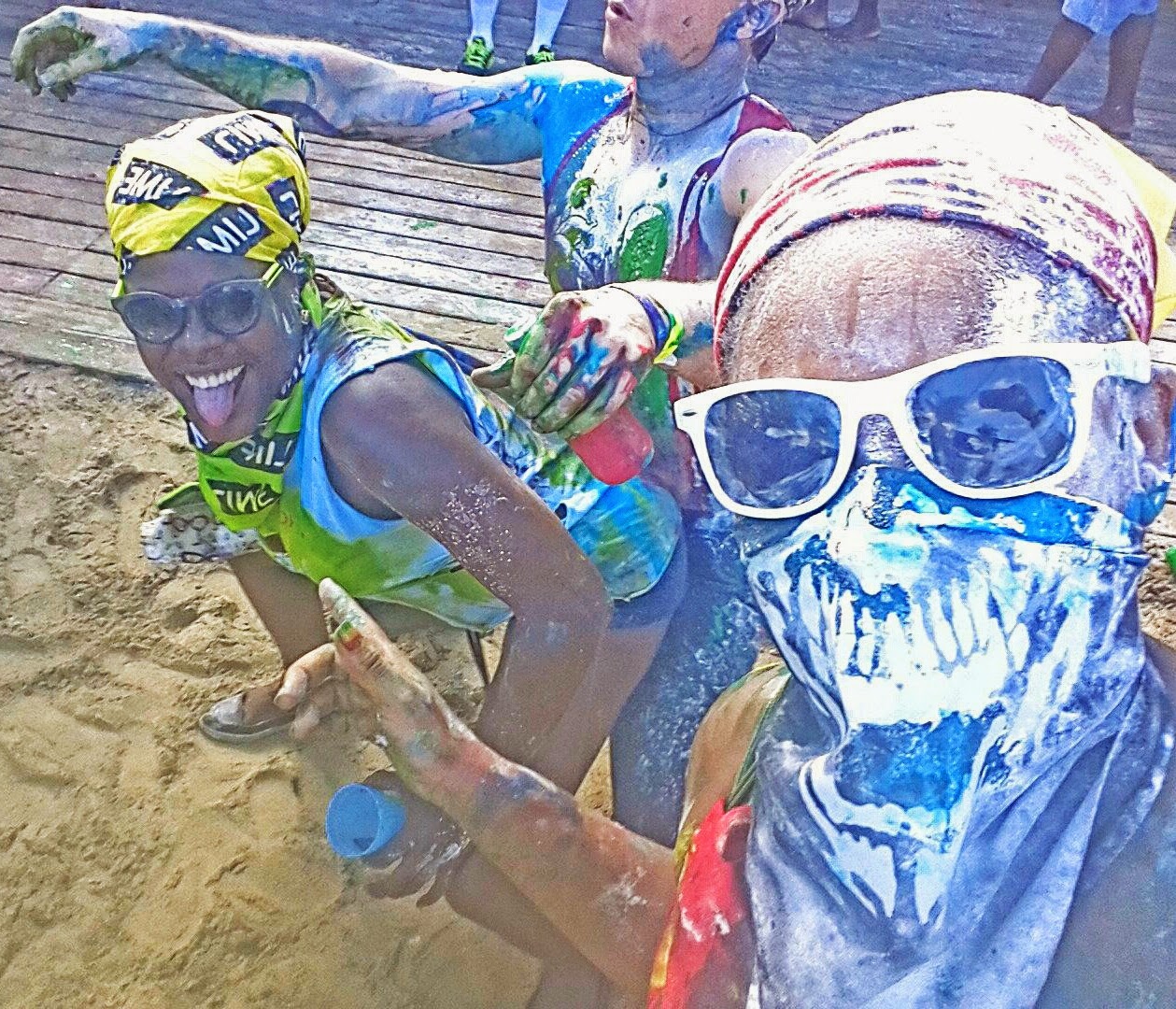 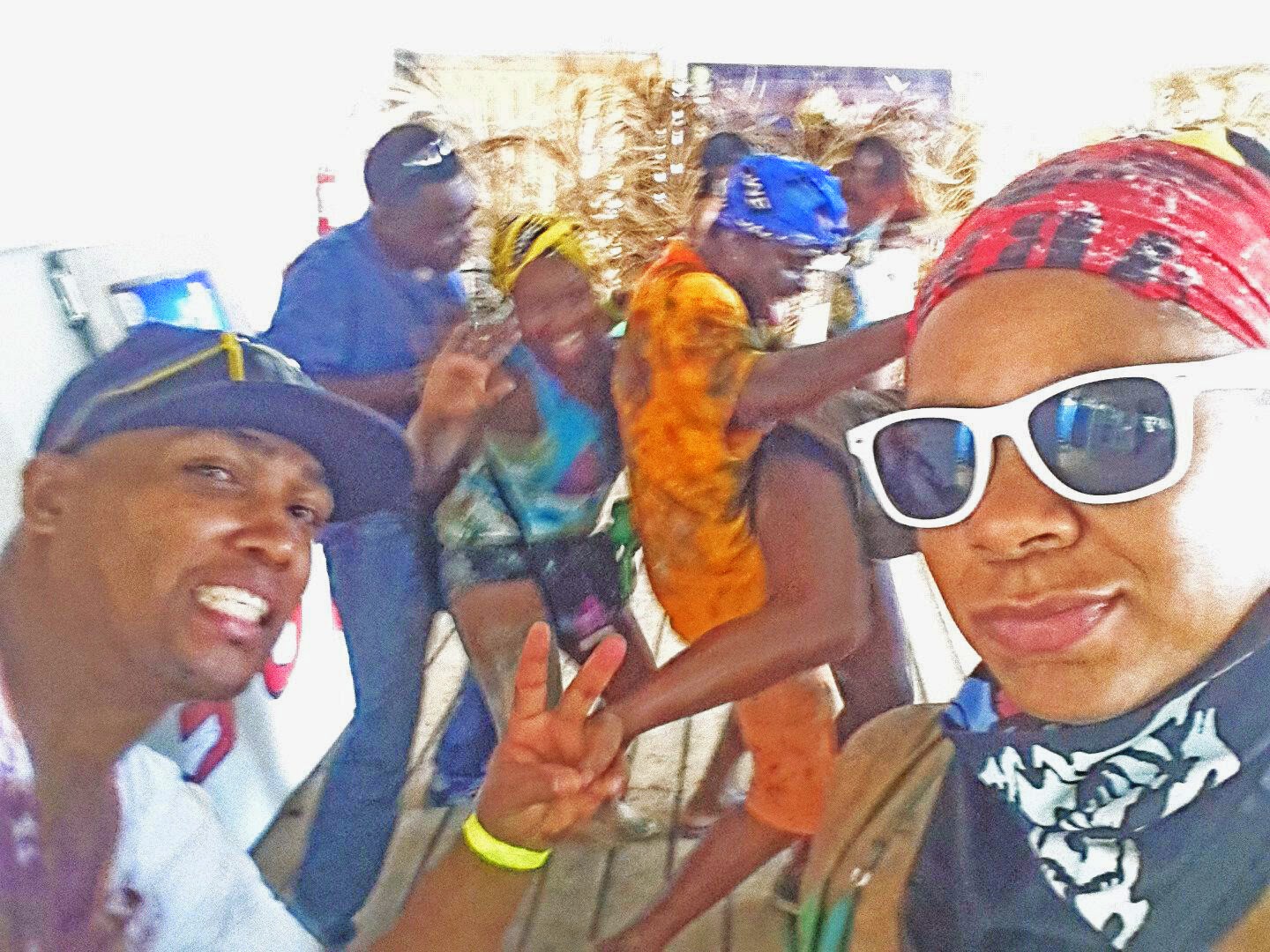 After Canboulay we headed straight to an unknown location to pick up our Caesar’s Army packages.  My navigation skills were really put to work as I had to read an old fashion map all weekend and guide the driver.  WHEW as P-Square would say, “E No Easy”.  Afterwards it was back to the villa to wash our asses and get ready for the Candy Coated Cruise.  There was a tropical storm passing through the area so the waters were insanely choppy.  None the less we drank, ate, danced, the works.  The Candy Coated events are always small, intimate gatherings.  Seeing these folks carnival after carnival, its like we are one lil fete’n family.  There was a boat across from us as we boarded with about 10 bazillion people on it and I just knew it was going to explode & sink at any moment. 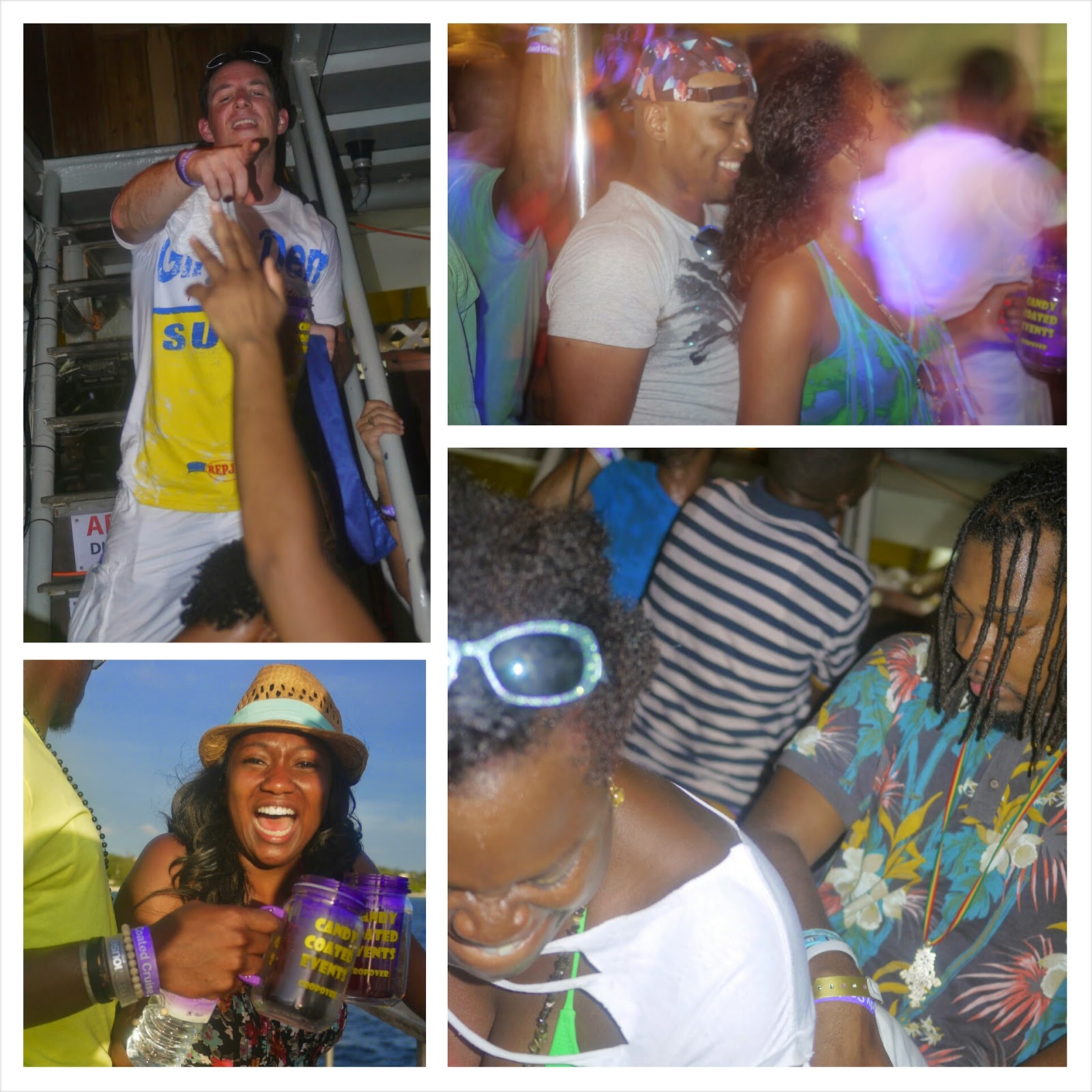 After  Candy Coated we stopped at some deeelish local eatery for grub. Wish I could remember the name of it, just ask for the “Deelish local eatery” if you ever visit Barbados!  Got about 4 hours of sleep and then headed to Caesar’s Army AMBush at 2am.  *Drum Roll Please*  I’ve had the honor of getting dutty with Caesar’s Army many many times through the years:  annually at TnT carnival, TnT Independence weekend, Jamaica carnival and now Crop Over.  I love jouvert and Caesar’s Army is the MONARCH of jouverts!!!  Do you hear (read) what I am saying to you?  If you ever have an opportunity to participate in a Caesar’s Army event … act like Nike and Just do it!!!  They always have an awesome performer and they always have a water truck.  The one thing I love more than jouvert is Wet Fetes so when I disappear at AMBush its because the water truck has arrived and I am jumping up and down like a little kid in front of the hose. 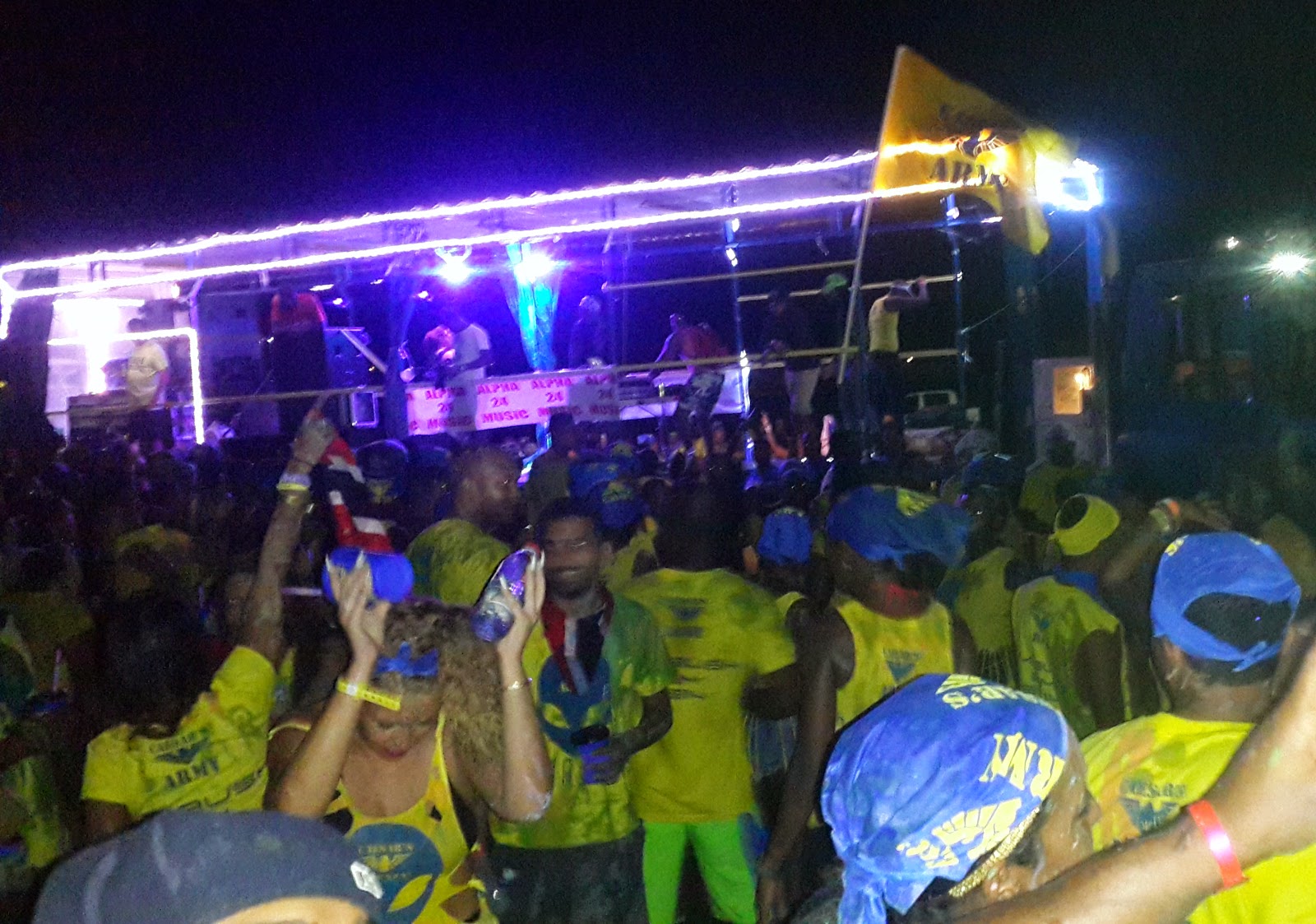 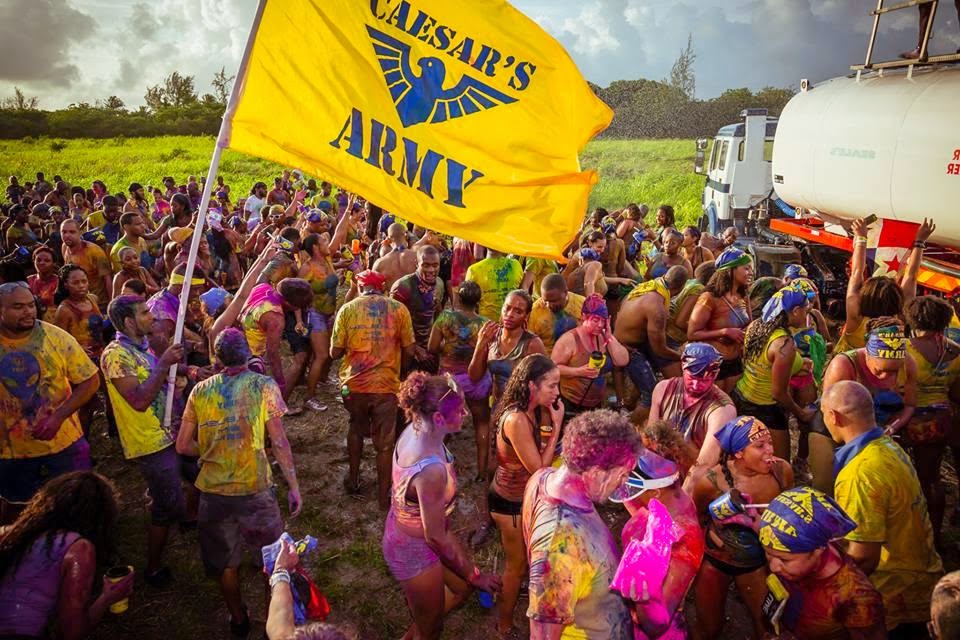 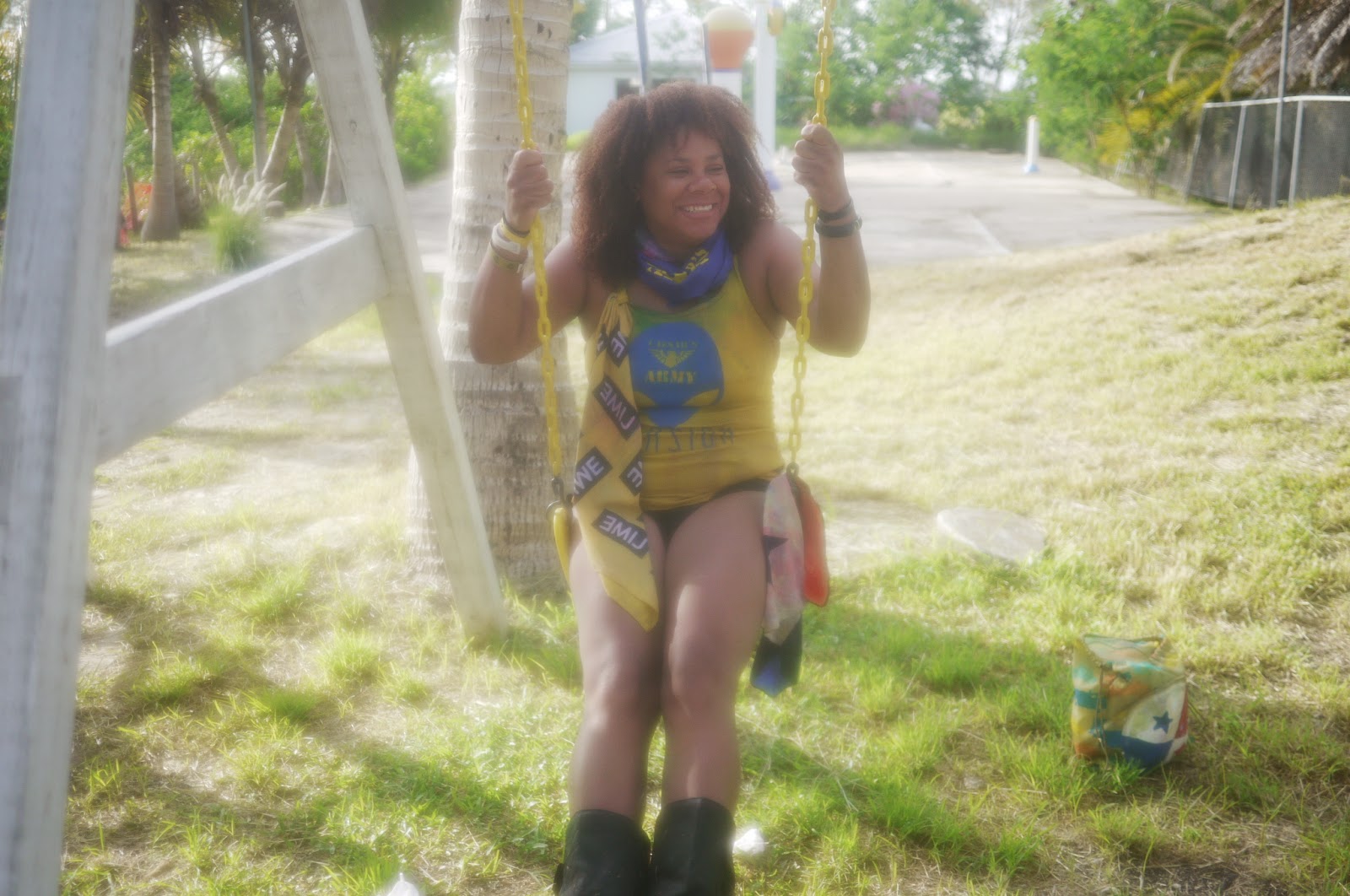 Sat we skipped the afternoon, evening & late nite events of Scorch cruise, Bliss all inclusive, and JAM breakfast party and saved $270.  We shoulda went to sleep after AMBush but instead we had a private beach fete (well we headed to Krave mas camp to pick up our costumes first.  Shout out for the easy breezy pick up). What does a private beach fete entail you ask???  Blasting chunes from the Bose, the inflatable cooler, lots of champagnes, rum and good friends.  It was so awesome; we were out there until around 5pm. That’s when everyone was drunk, burnt, and hungry.  I did a mini photo shoot while we were out there. 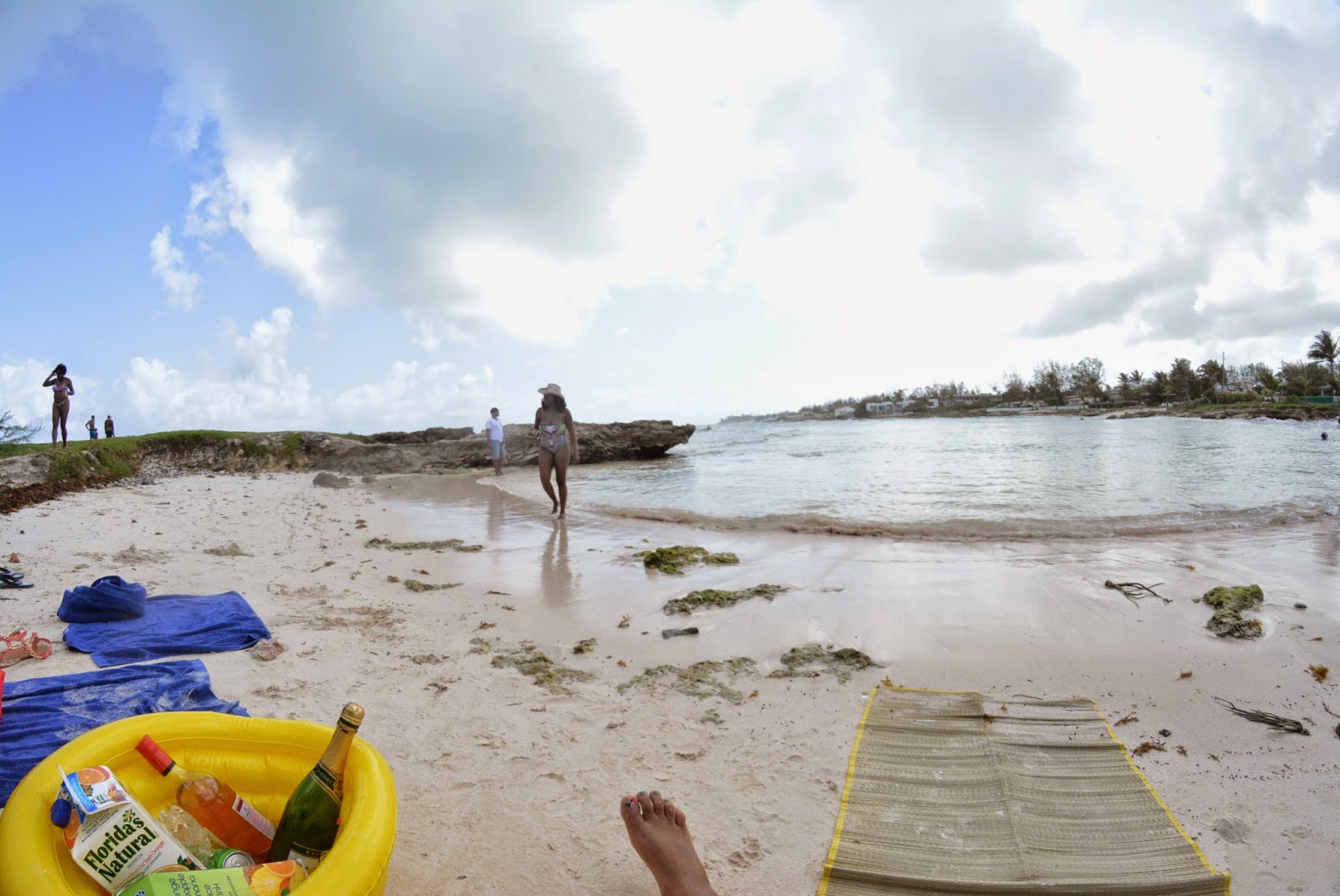 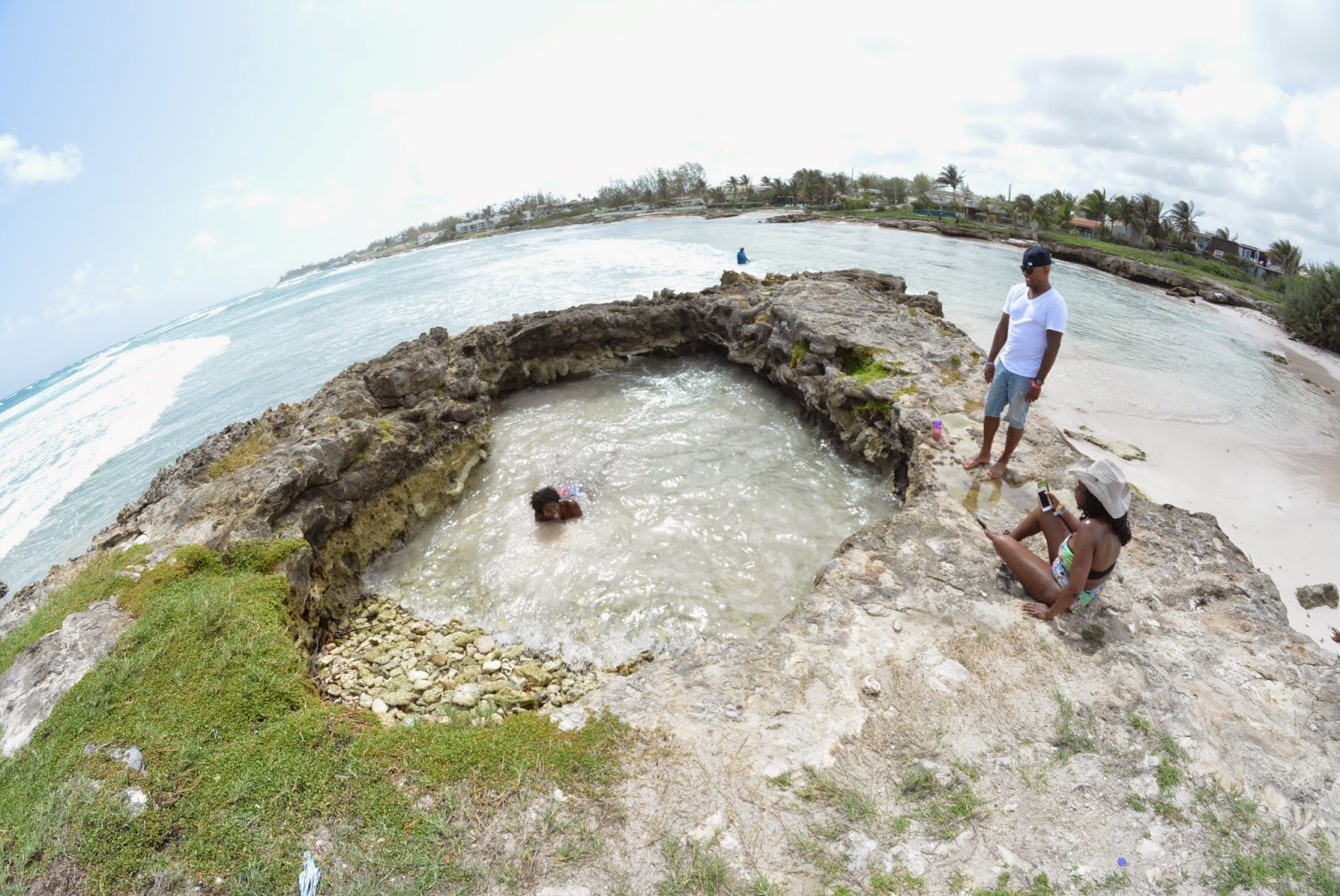 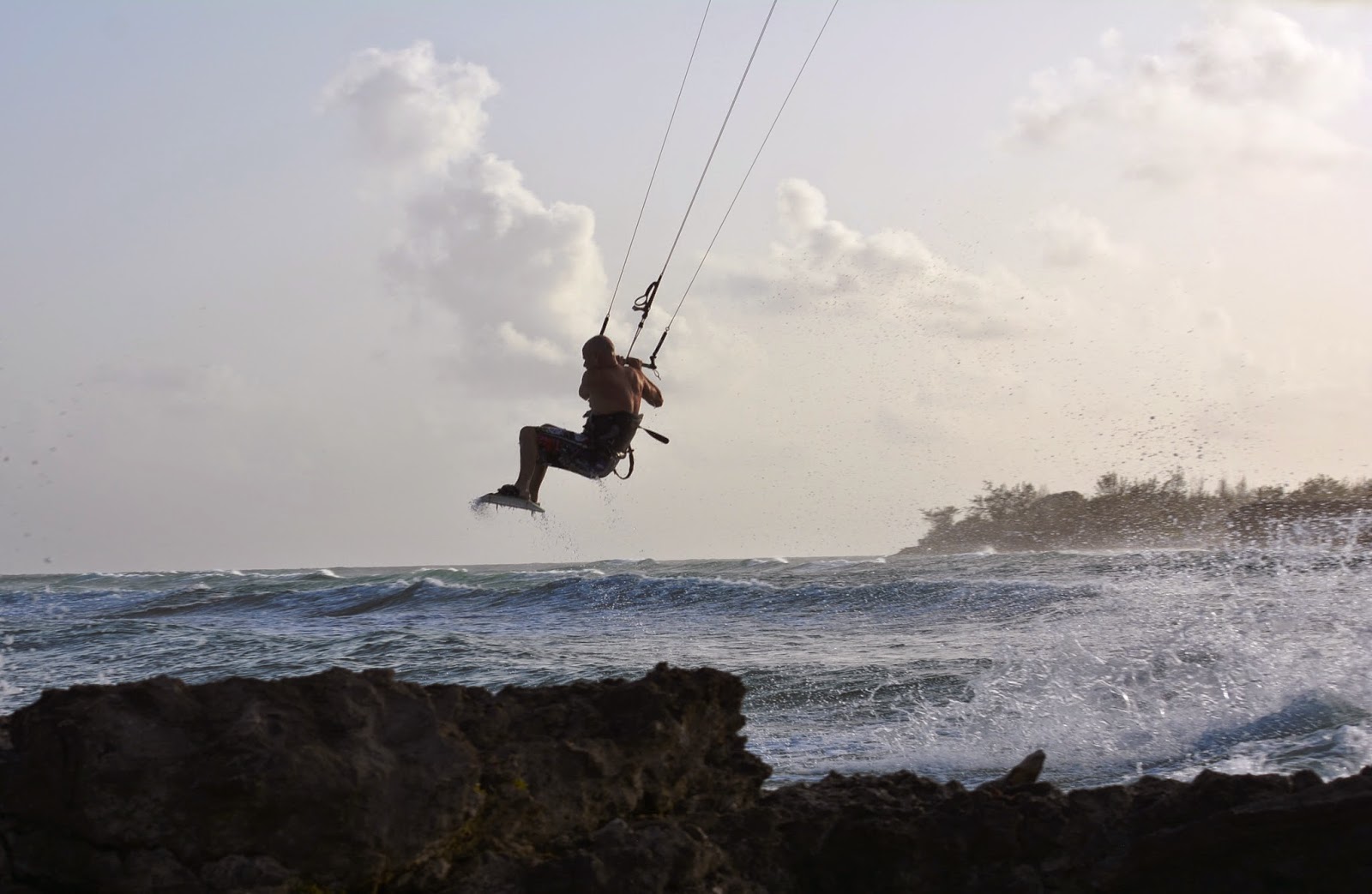 That nite the homies went back to that deeelish local eatery that I told you about for grub. I was just craving more champagne so we got some overpriced champagne with cobwebs on it from the local mart.  One thing I learned in TnT is that cheap champagne aint so cheap once its imported.  I then drank  & listened to chunes by the sea until around 1am.  One of the most relaxing days of my life.

Sunday was the Limerz Cruise, it was beyond amazing, one of the best boat rides/fetes I’ve been  on EVER!! 8 catamarans cruising through the Caribbean Sea side by side.  Each with its own DJ, bar, and catered lunch. I took a “boat load” of amazing pix that day, but sadly had an incident and broke my phone b4 the pix could be backed up to the cloud.  Here are some pix borrowed from various sources (Lehwego, Jermaine & Charmaine).  *Update*  recovered 80% of my pix and wrote a blog just for Limerz Cruise. 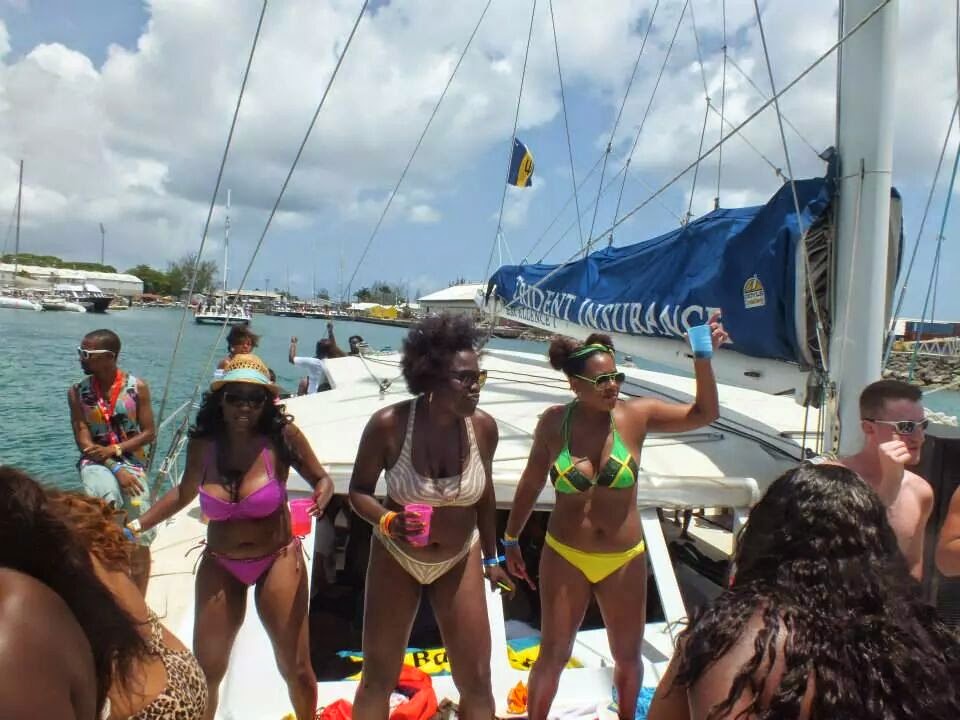 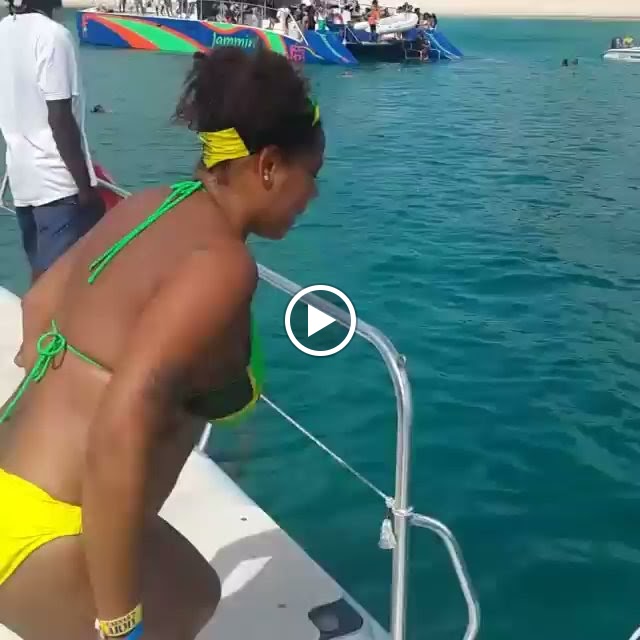 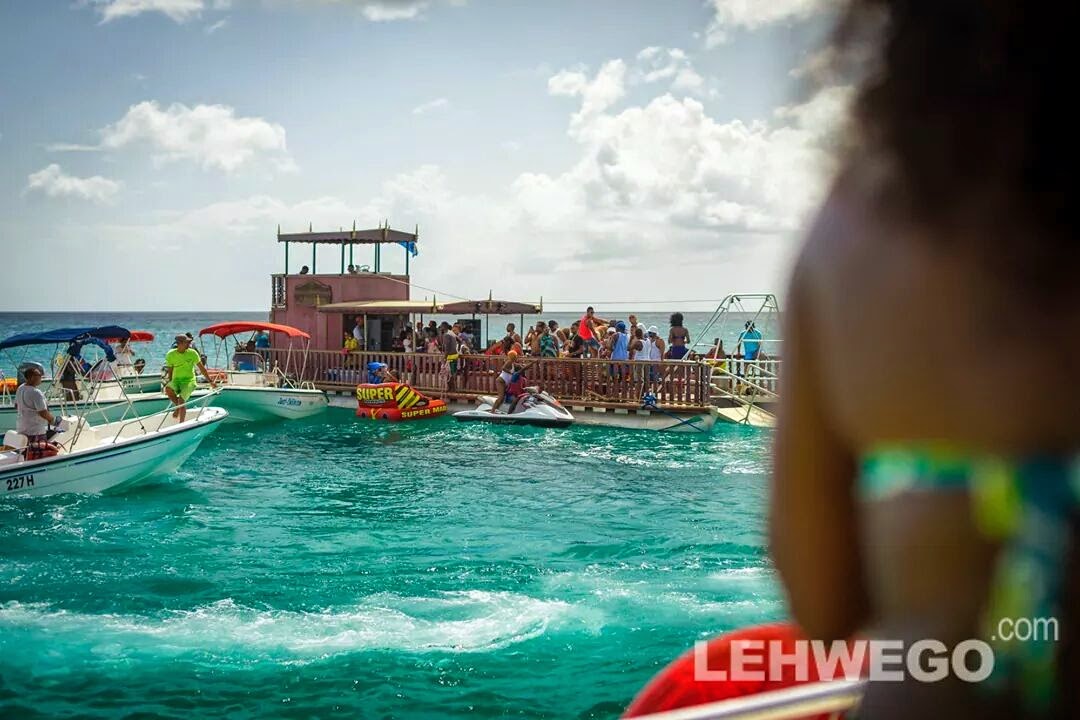 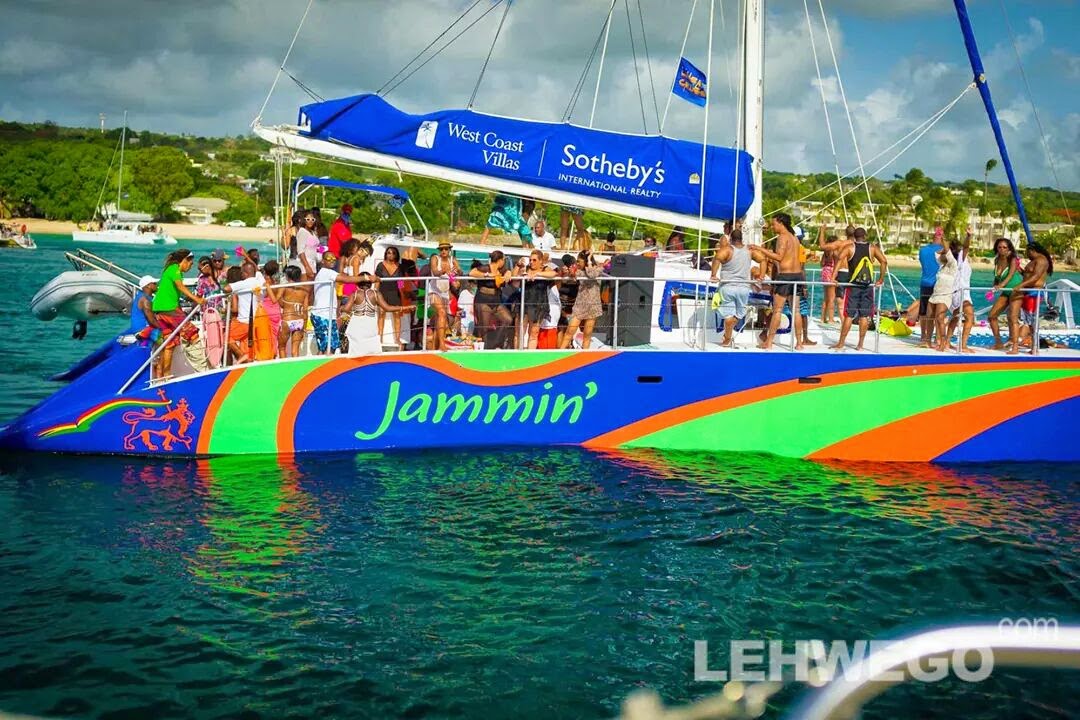 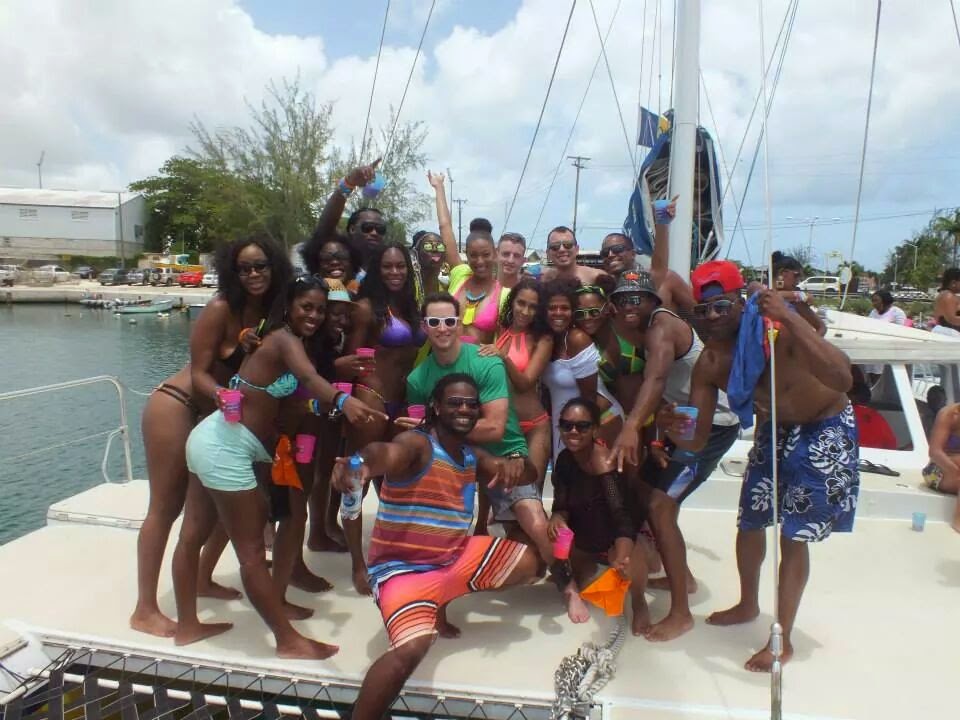 Monday morning was Kadooment Day aka Road March.  The bands met up at The National Stadium at 7am, but we arrived at 10am (because we know how Caribbean people operate).  We lingered outside the stadium till about 11am while we waited for our turn to cross the stage.  This would have been a perfect time to get everyone liquored up, but the booze didn’t start flowing for about another hour.  We crossed the stage around noon and then marched through the very narrow streets of Bridgetown.  The parade was supposed to end at 4pm, but it kept going much later.  Around 3pm, my body said, “F*ck this sh*t” and I pit stopped at KFC. Nom nom nom!!!   Around 6pm there was a stop on the road for food, but by then most of the food had gone bad.  The homies came back with plates full’a nothing, while I was rubbing my satisfied belly.  We ate breakfast around 8am, so how they survived that long boozing and wuk’n without food… iDunno . All in all I had a good time on the road, its hard to NOT have fun when you are pumped up full’a liquor.

Road March video
We debated going to Caesar’s Army OH SHIP (last lap boat ride) after carnival, but my homie Charmaine & I opted to sit on the balcony and drink another bottle of champagne.  One of the crew said F*CK IT and kept the party going for the rest of us.
Some of the crew flew out Tuesday morning, but Charmaine and I stayed to max and relax longer.  We didn’t do anything other than just get wasted on the beach. That my friends is how you define True Happiness, getting wasted on the beach with awesome chunes blasting in the background. 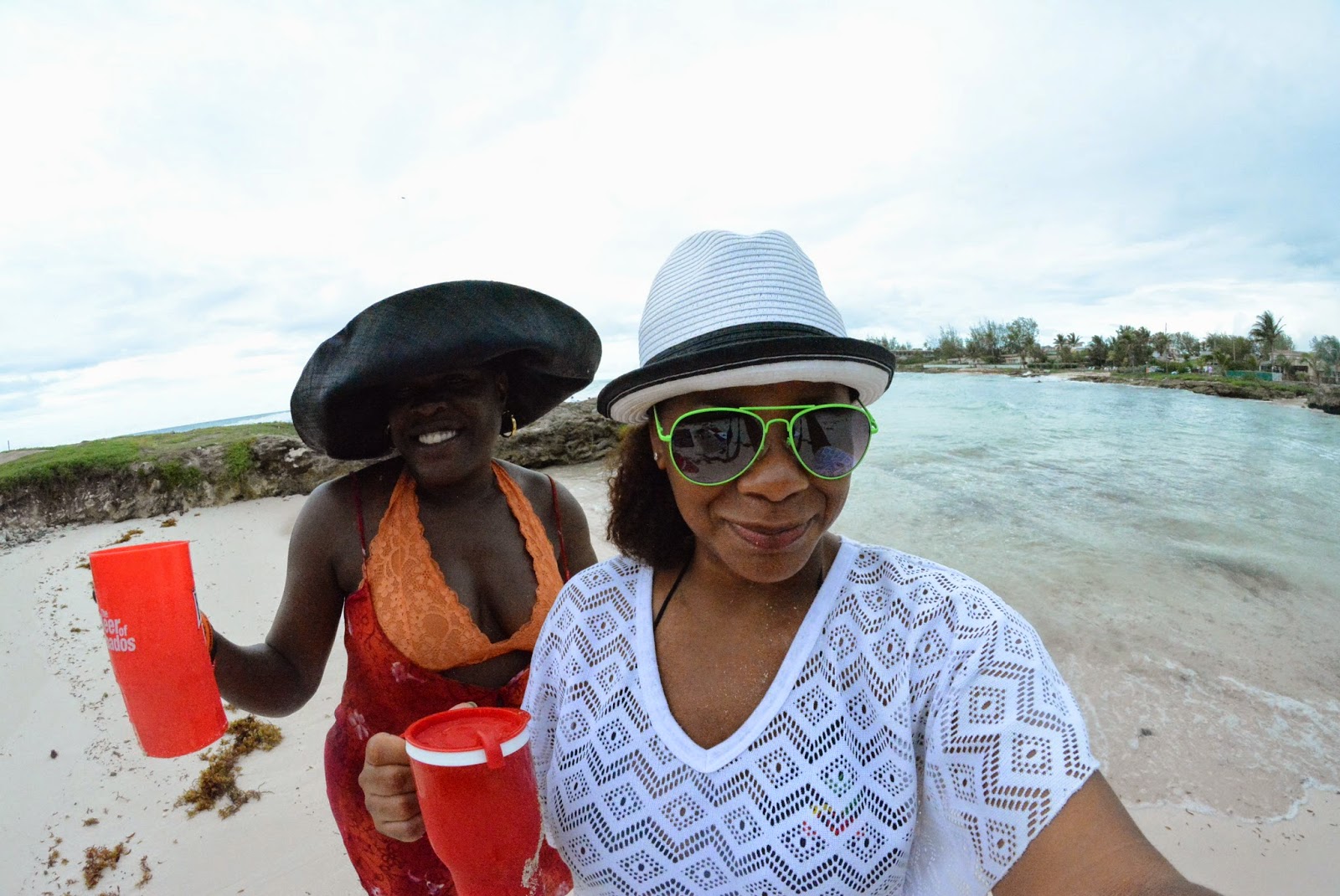 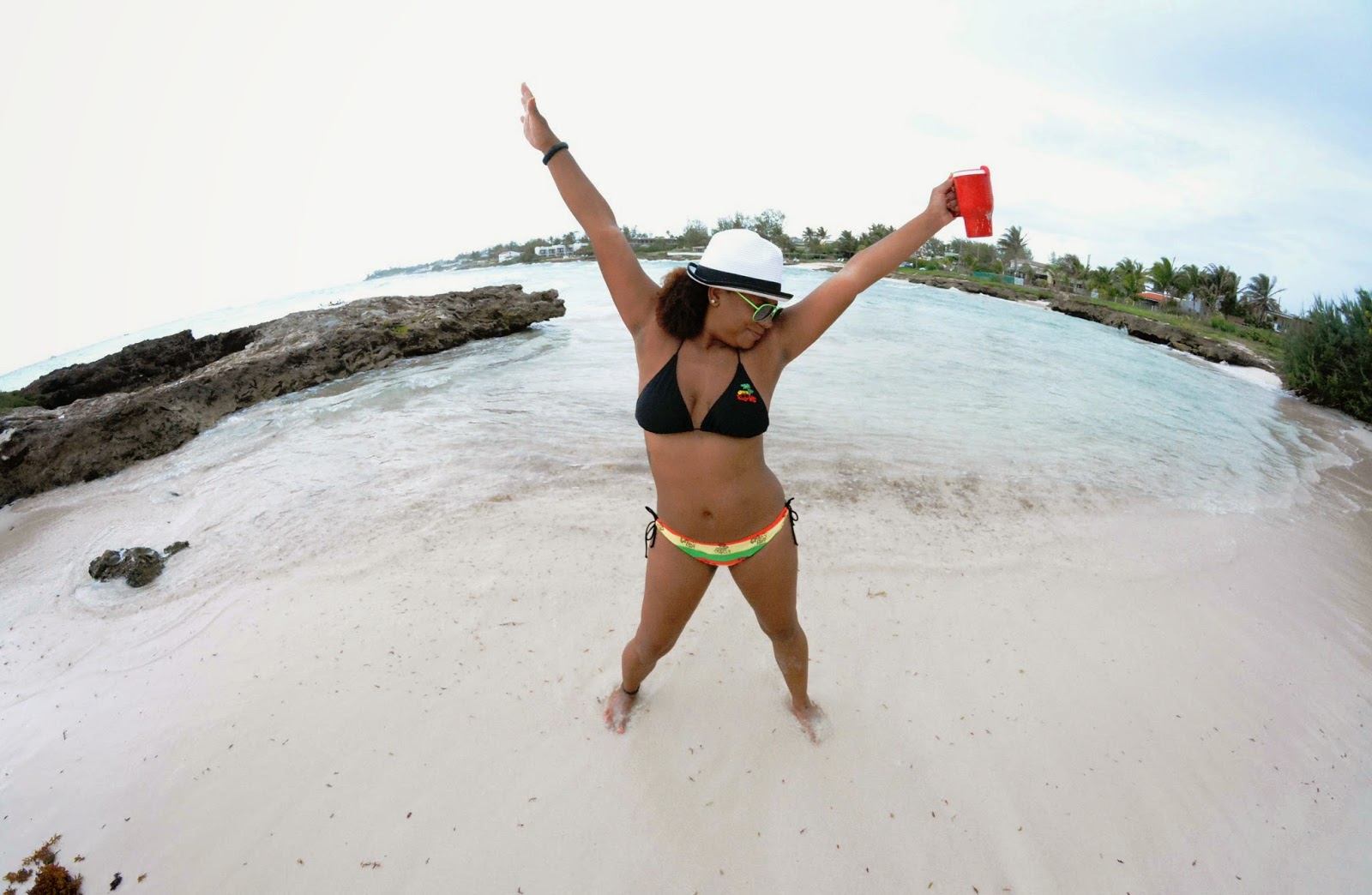 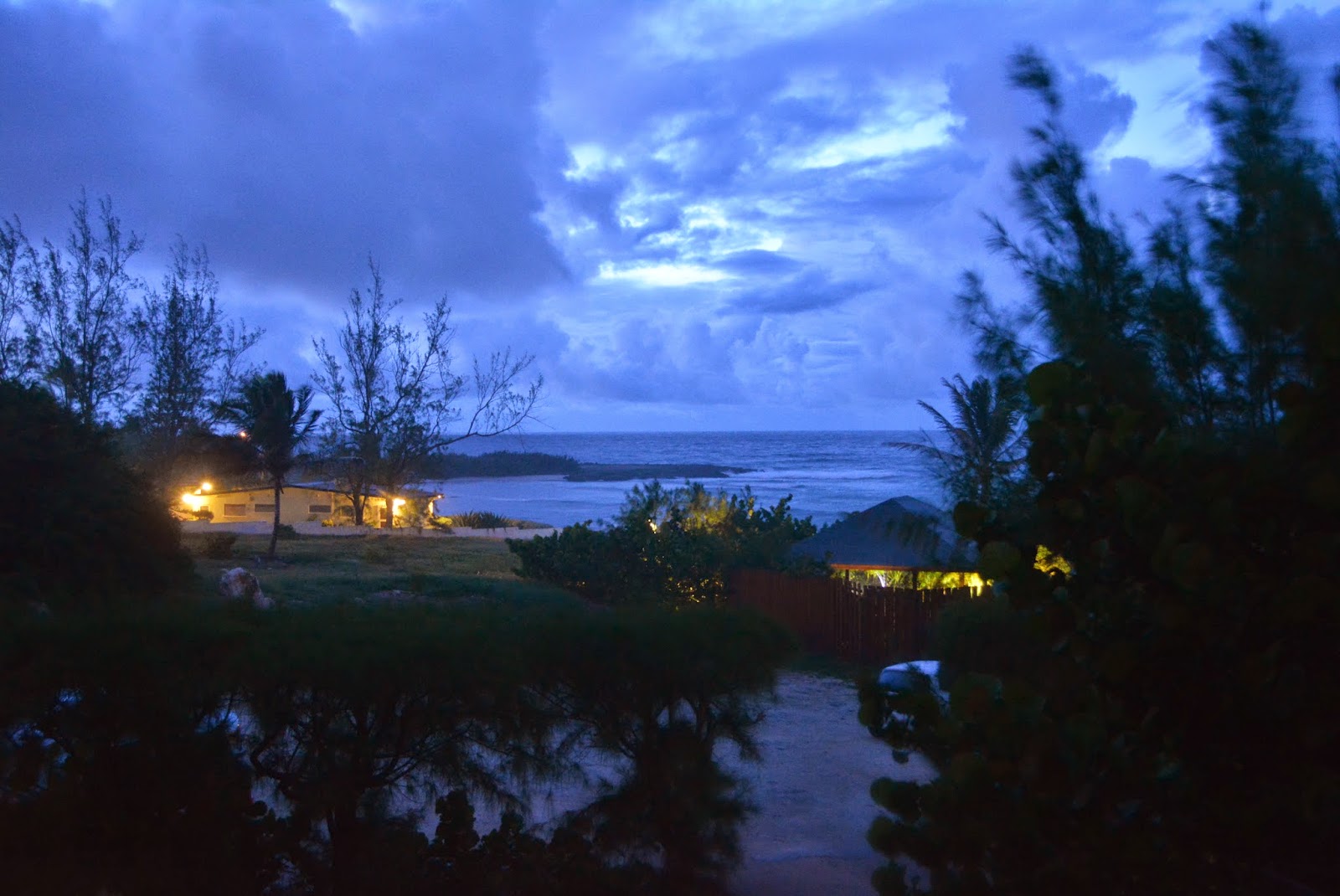 Like I said above, I had a dayyym good time, I just didn’t have $2,000+ worth of “Good Time”  Because I live my life on a series of financial spreadsheets I can truly equivalate fun into $$ and I had about $1,400 worth of  fun.   I suppose I coulda saved myself $400 and not played mas or made my own costume and stormed the bands cause security wasn’t very good.  Maybe that’s what I’ll do if I ever come back.   See you at Miami carnival as we do The Quadruple, as LehWeGo says!
By AngelaPanama at August 11, 2014