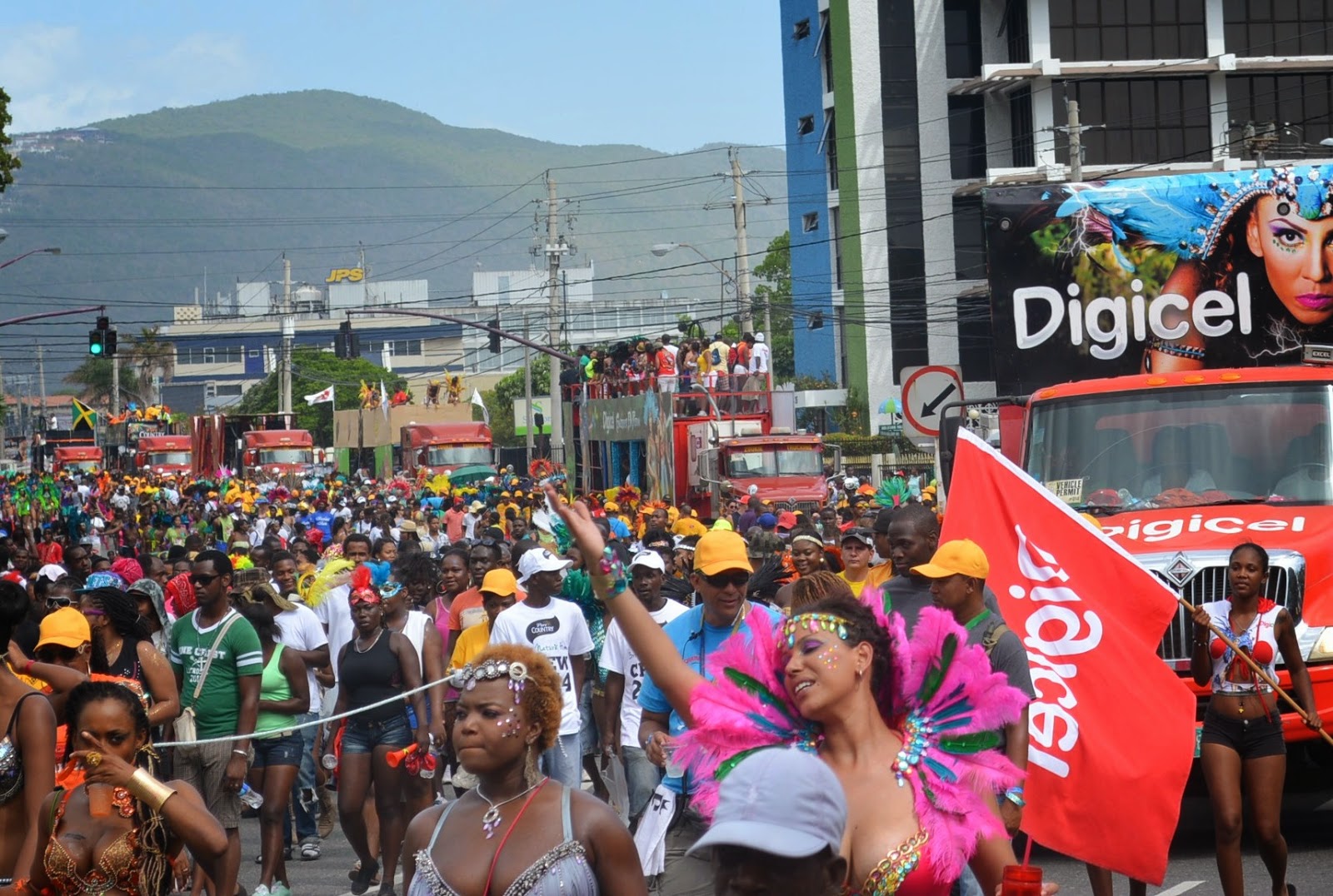 Jamaica carnival is really getting its life together.  This years trip was pure marvelousness.  First, let’s talk price, Jamaica carnival is so dayym affordable.  Even though I don’t really like to drop $$$ I’m going to let you get a peek at the carnival spreadsheet that I live by.  Trinidad carnival CAN NOT be topped, but if you don’t want to drop $3,000-$4,000 on TnT carnival then Jamaica is an awesome alternative.  The fetes and Road March tshirt together in Jamaica cost me $500. $500 won’t pay for my flight to TnT, $500 won’t cover all the fetes in TnT, $500 will only cover 1 ½ nights lodging in TnT. If you want a JA costume that’s $300, but $300 will only pay for your TnT costume deposit.

Landed in Jamaica Thursday morning.  I booked a crack of dawn flight because I knew the wonderful  Spanish Court hotel would let me check in early.  They were so dayym accommodating last year, I couldn’t see them saying NO to any requests.   When I was in the airport a young lady walked up to me and asked, “Do you have a blog?”  YES! “Are you Angela Panama?” YES!  That totally made my day, I was like WOW someone other than my family members actually reads my blog. Lololol Anyway, I picked up our jouvert packages, some last minute fete tickets, went to the grocery store across the street to get party supplies and then had a port a party at the hotel pool while I waited for my homies to land Thursday night. 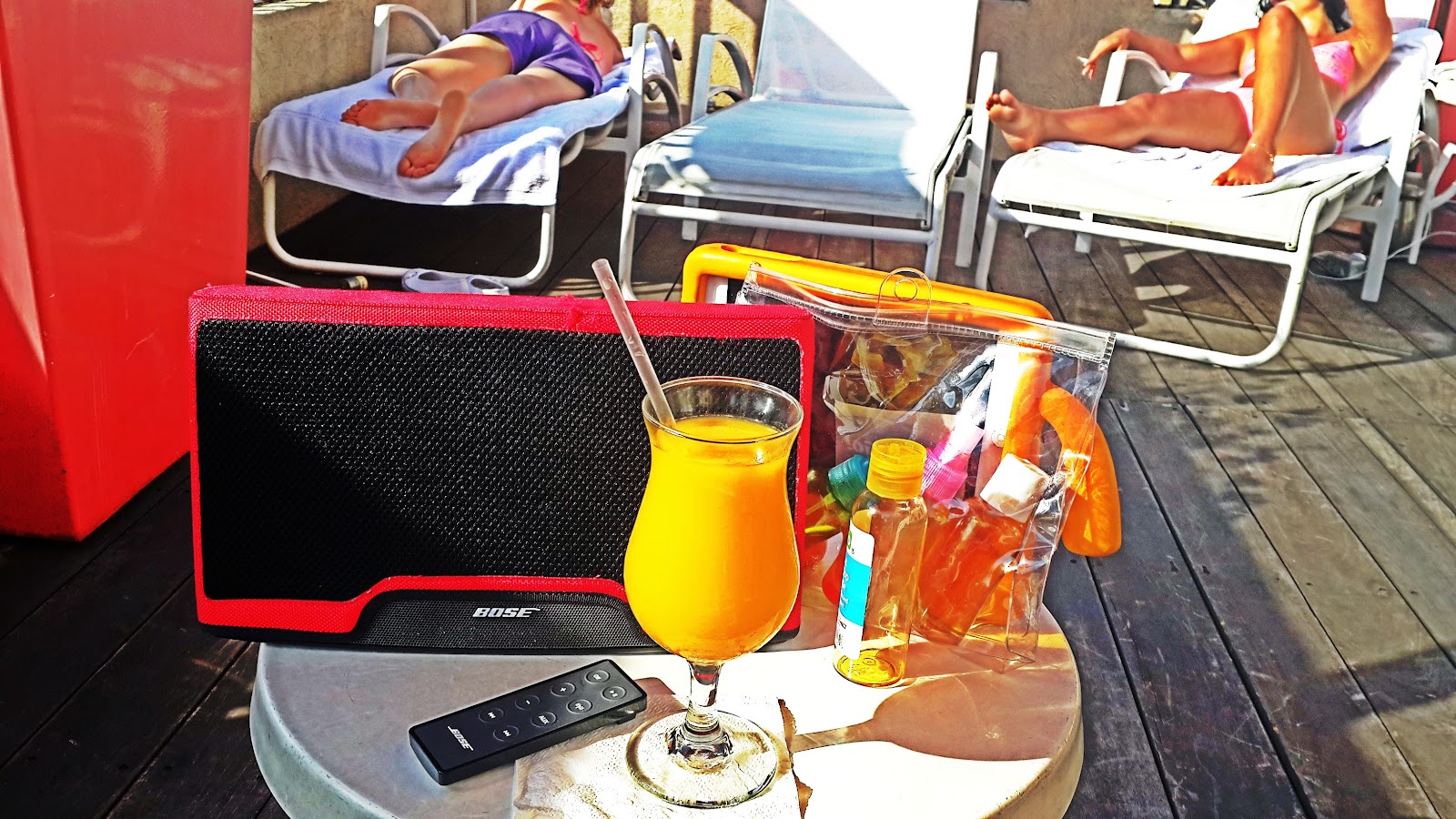 Thursday night headed to Pandemonium right down the street from our hotel.  The great thing about fete’n in the Caribbean is that all the fetes are in the wonderful outdoors.  Performances by Machel, Mr. Killa and Shaggy and then my favorite part… the paint & powda. The rest of the homies went to the Frenchmen party Blocko, but I love paint and powda too much to miss Pandemonium.   Mr. Killa had everyone thoroughly entertained with his usually crazy azz antics. 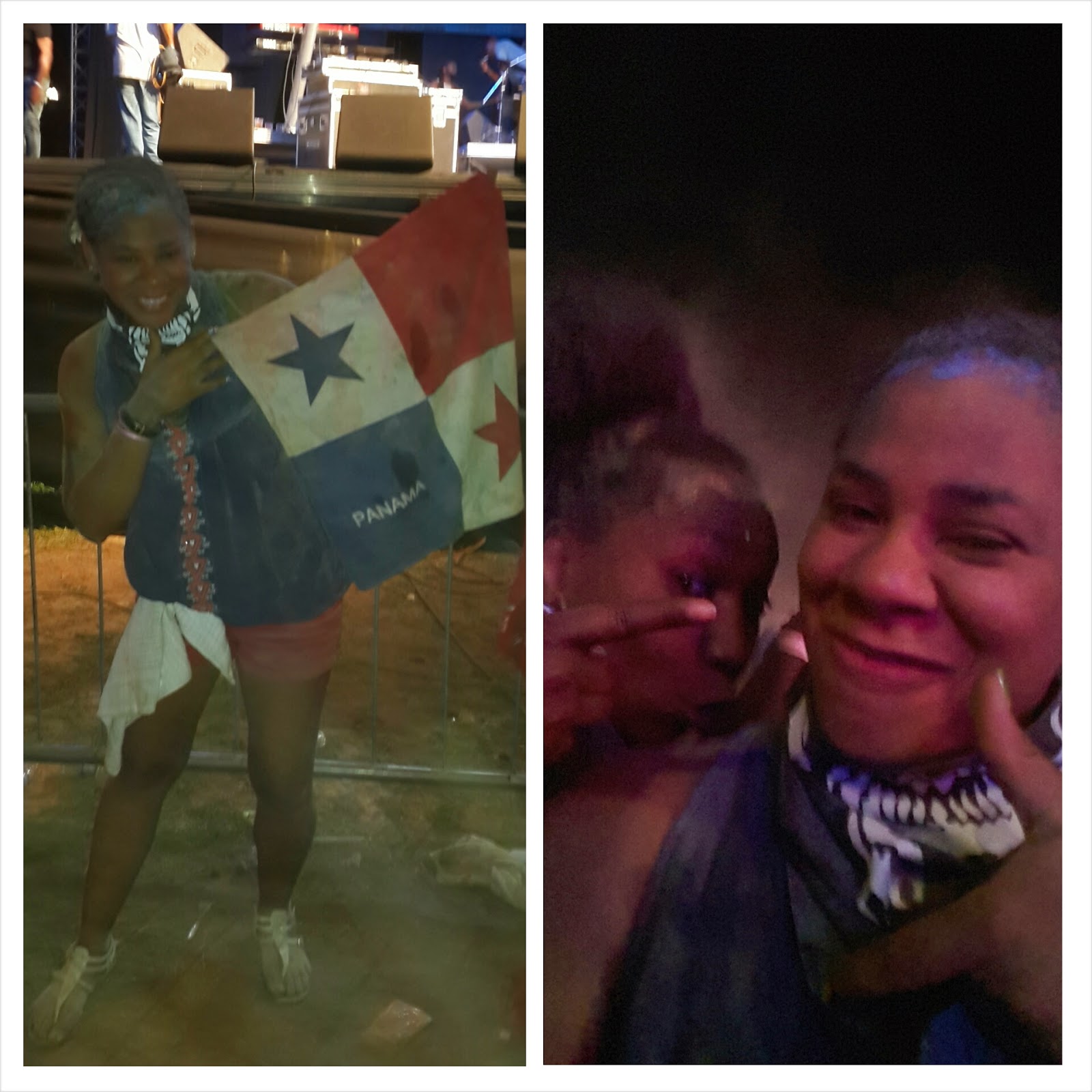 Friday afternoon we headed over to the Kingston Yacht Club to sail away on the Wine Down Cruise.  That fete was so awesome it required a blog & video of its own!!!  Candy Coated Events & Caesar's Army really took JA carnival up a couple notches this year.
http://www.angelapanama.com/2014/04/candy-coated-wine-up-cruise-jamaica-2014.html 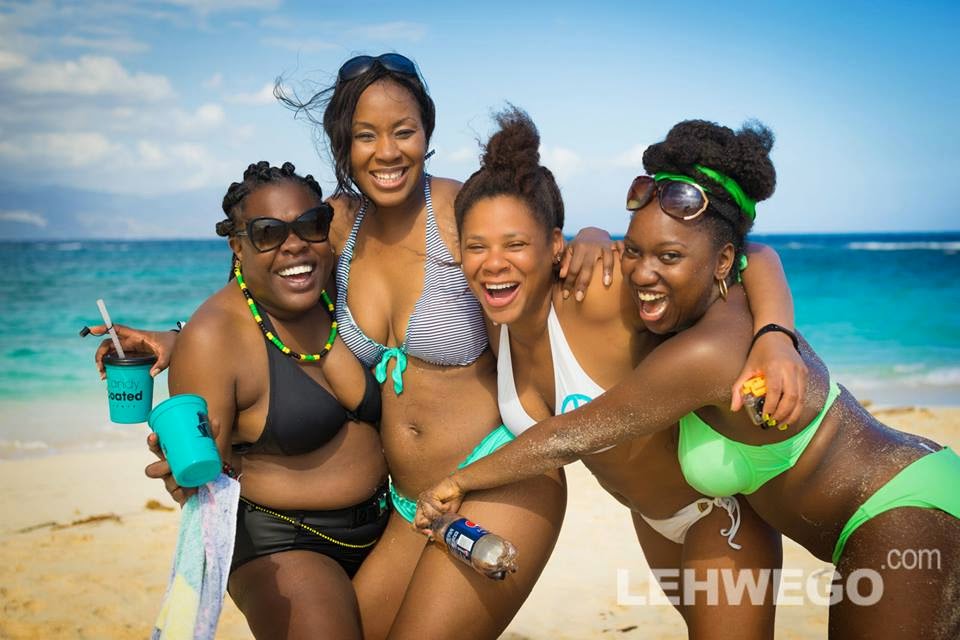 Knowing the busy Saturday we had ahead, we should have went to sleep after the cruise, but we had a pool party at the hotel instead.  Made some bootleg mimosas of Moet, juice and white rum.  (Funny thing about over proof rum in Jamaica.  If you ask for dark rum you will get 80 proof Appleton. If you want over proof rum, they simply call it white rum. LOLOL) Anyway, ended up getting about 3 hours of sleep and it was painful as hell getting up for the next fete.  To quote DJ Quick – Tonight, “Soon as I felt it comin on I should quit, it's true that a drunk ain't shit!” Even though we brought our own food, music and alcohol the hotel was kind enough to keep bringing us ice to help keep our party going.  Love the Spanish Court Hotel 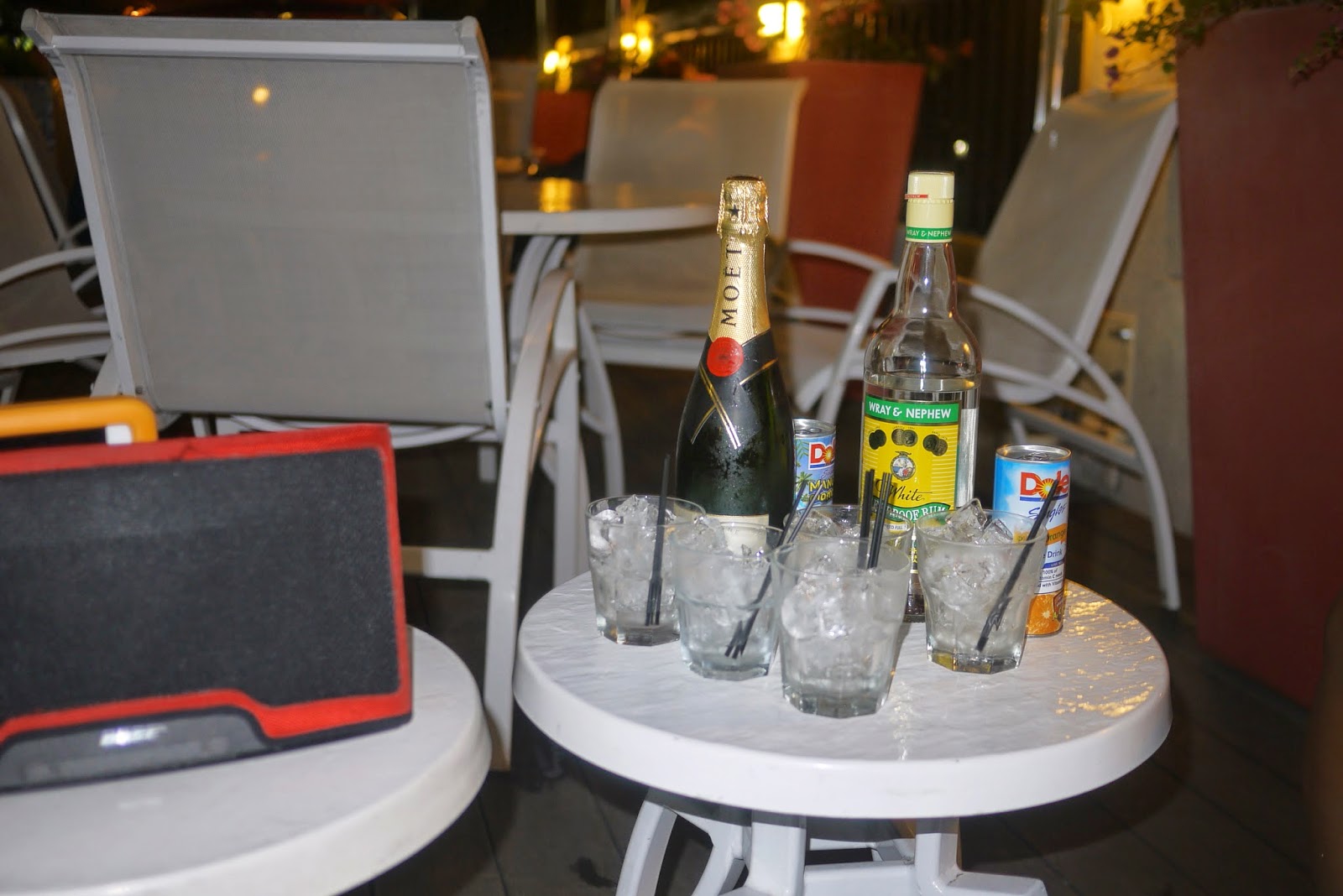 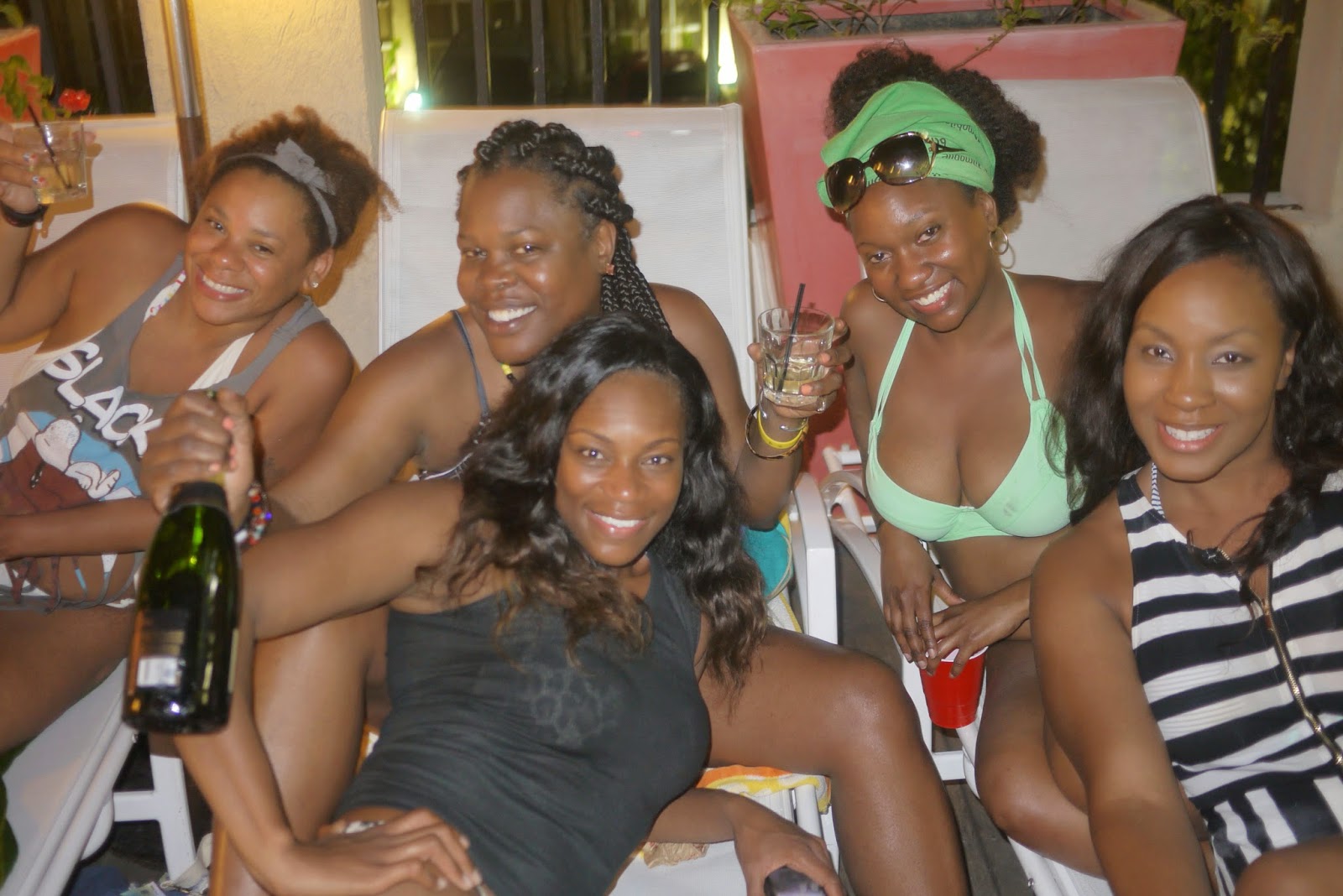 2am Saturday we headed to Caesar’s Army AMBush. Now if you read my other blogs you know 1) I love jouvert 2) I love Caesar’s Army.  This one was a mini version of the Trinidad AMBush with only 300 guests.  No complaints about the reduced # of guests.  It was a much smoother package pick up process and the AMBush start was much quicker.  Machel and I think Skinny Fabulous performed, I tend to wander off and dance with the water truck so it’s possible that there were other performers.  The liquor was flowing, OMG the liquor was flowing, GOOD GRIEF the liquor was flowing. Even tho we thoroughly  covered ourselves with baby oil before the start, that lime green paint had us all looking like we had jaundice afterwards. Everything we touched Saturday turned yellow, F*ck it!!! 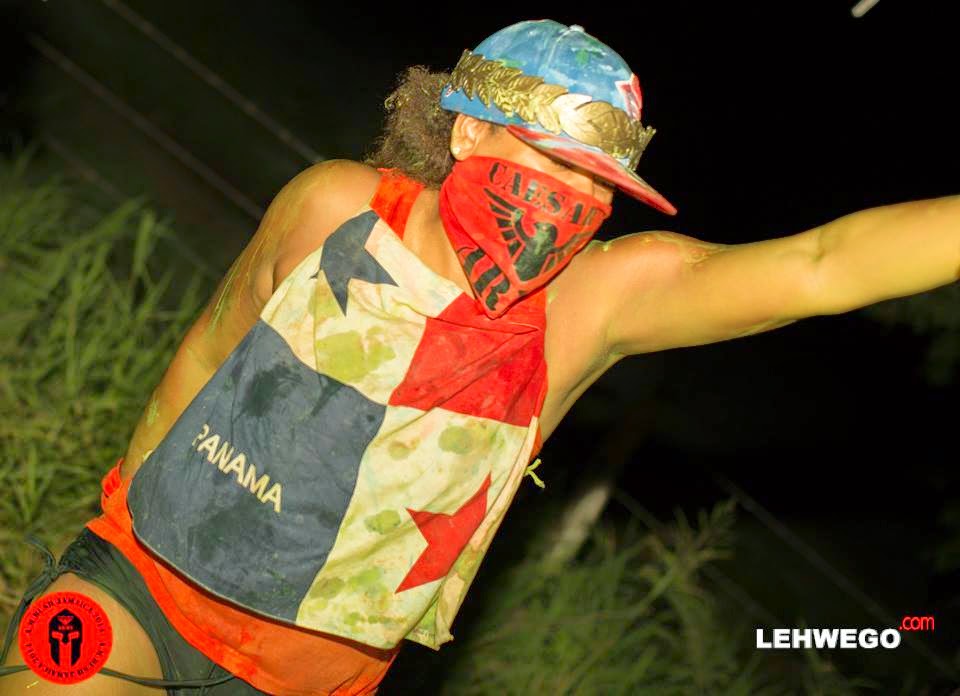 Left AMBush around 7am, headed to the hotel for a quick shower and change of clothes and then straight to the Sunrise Breakfast fete. The breakfast fete went until around  11am, I was pretty useless there (was regretting the pool party the night before).  Ate breakfast, had a beer and tried to stay out of the blazing sun. The fellas skipped AMBush, were at Sunrise much longer and confirmed that the breakfast fete was as awesome as it was last year. 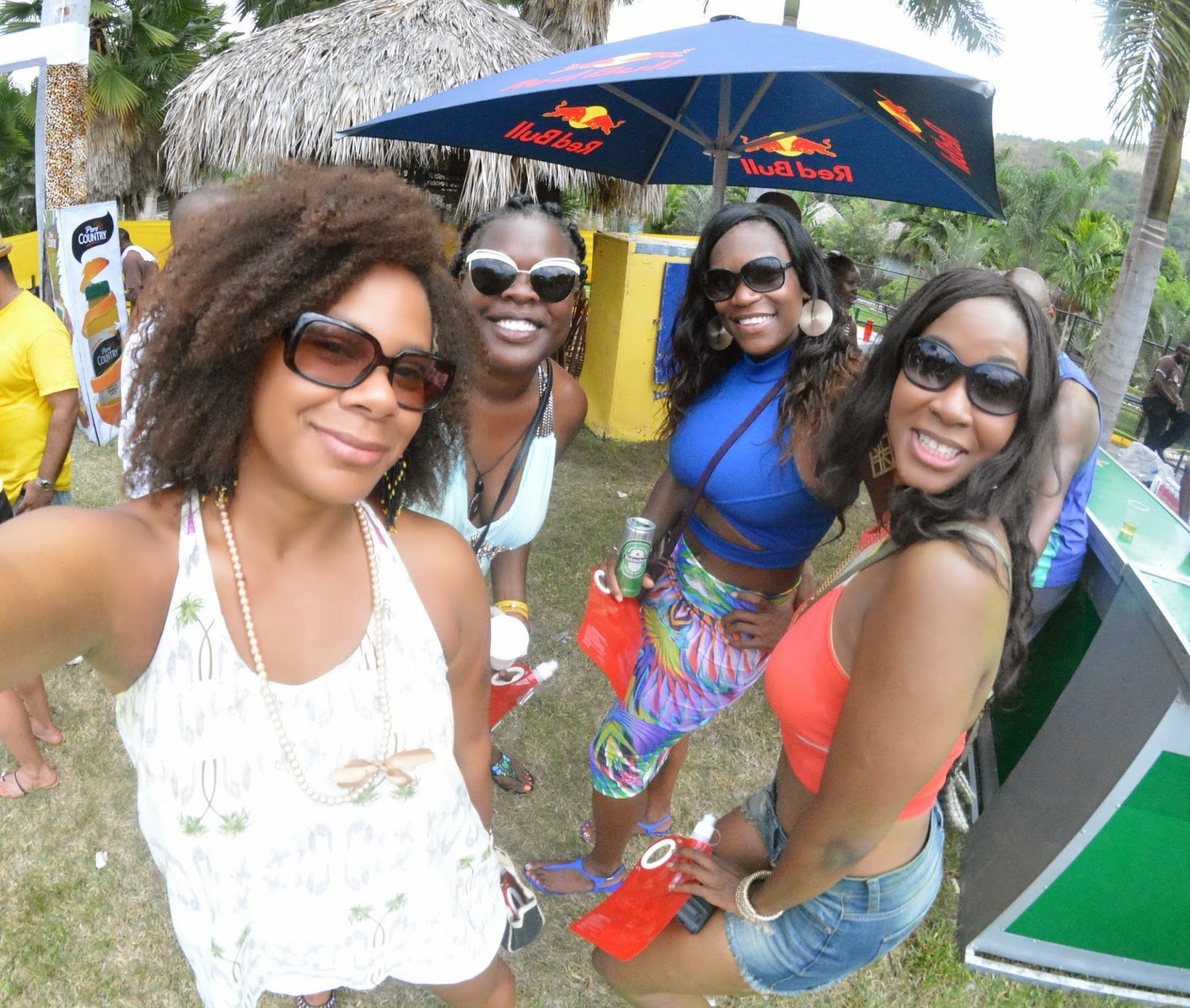 Because some people never learn, we headed straight the hotel pool after the breakfast fete for another pool party.  To quote DJ Quick again, “I thought you wasn't drinkin no more…  Yeah right, we doin the same ol shit tonite.” The fellas were even kind enough to bring us a sh*t load of jerk chicken which we promptly tore the *BEEP* up!!! 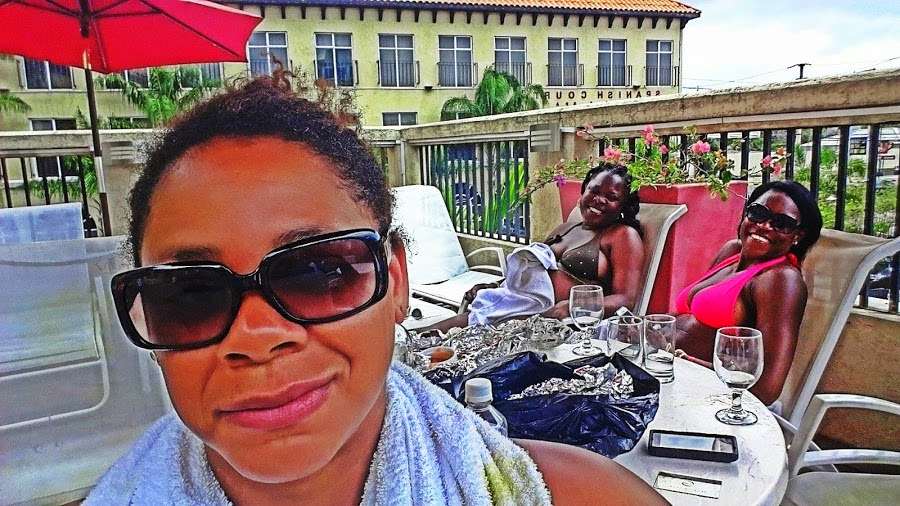 We did manage to get some rest Saturday afternoon before we headed to the Frenchmen Bazodee fete.  Just like last year Bazodee was fabulously upscale.  Like 10 different food stations with every type of Caribbean food your heart could desire.  The best DJs and lots of Caribbean artists mingling in the crowd. 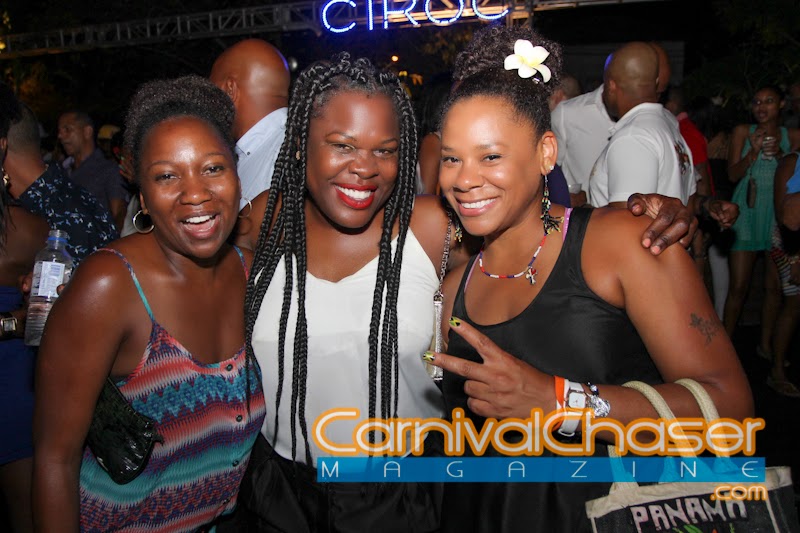 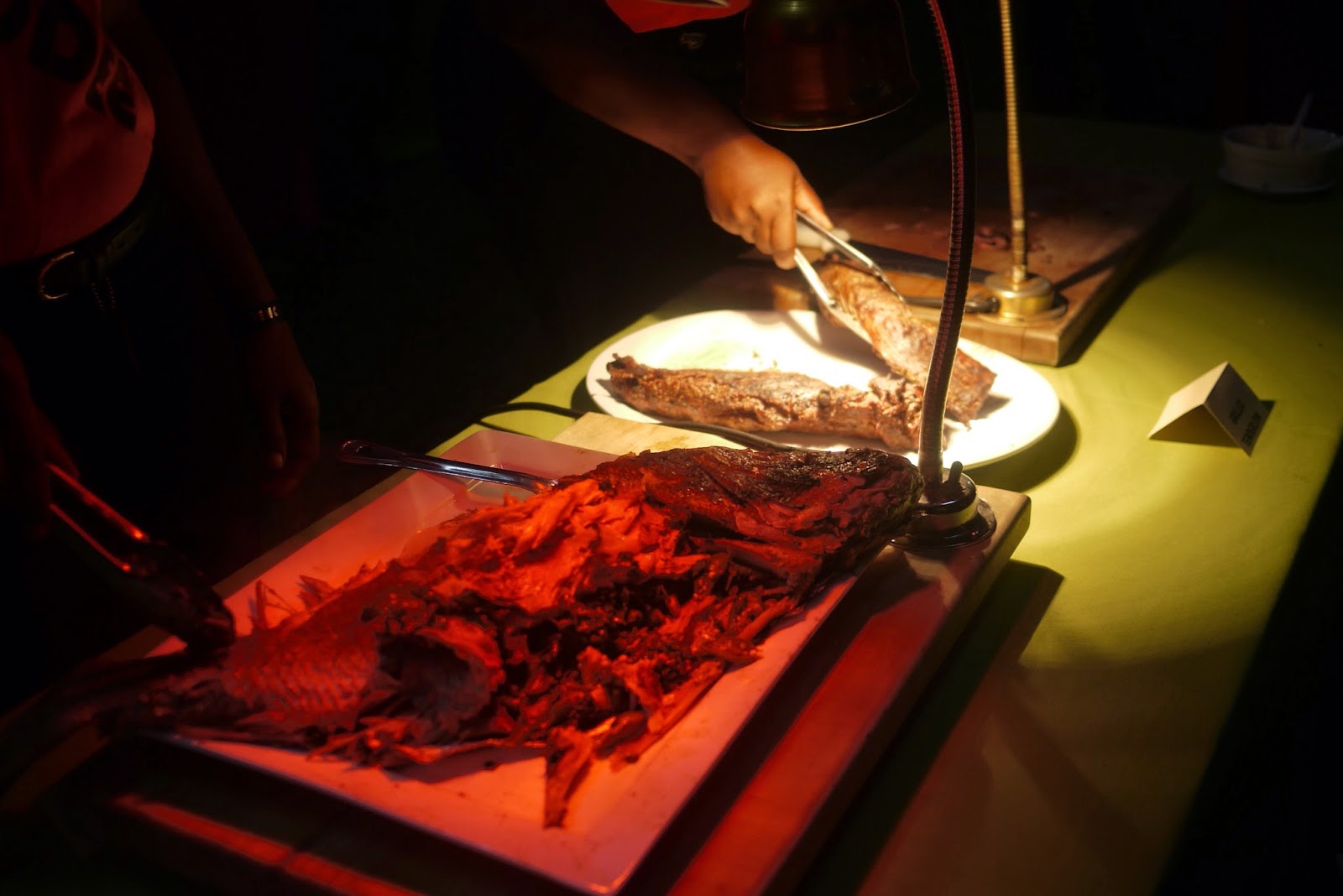 Sunday Road March: JA carnival is a little different than other carnivals because there is only one band “Bacchanal Jamaica”.  According to LehWeGo the band is about 3,500 people strong.  That was about the size of my band in Trinidad.  I like the one band concept. If you get a late start like we do, you don’t have to waste an hour looking for your particular band.  You just have to go to the parade route and find the only band on the route.  I can’t remember if there were 4 music and 4 drink trucks or 5, but there was no problem getting drinks and great vybz.  JA allows t-shirt sections which is usually a NO NO with big carnivals.


My only problem is lunch.  They only give you 30 minutes for lunch.  Lunch is usually the time were we take a quick power nap.  We got to the lunch site at 2pm and they announced that they would be departing at 2:30.  You best believe they left at 2:30 with about 50% of the masqueraders still inside eating.  I was running behind the last truck with a piece of chicken in my hand, Just Kidding! The road march starts at 10am and they go until around 10pm maybe even later.  Ima “G” but I can’t drink and dance in the blazing sun for 12 hours straight.  We got to the las lap fete around 7pm.  I ate dinner, had a drink and then literally said to my friends,  “I have nothing left to give to today, I’m going back to the hotel.”  No pool party that night, I was out like a baby.


My homies flew out crack of dawn Monday, I booked a late flight and chillaxed by the pool all day.  I thought about going to the Bob Marley Museum, but I decided to just keep my azz behind the secure gates of the Spanish Court Hotel with my Port-a-Party. 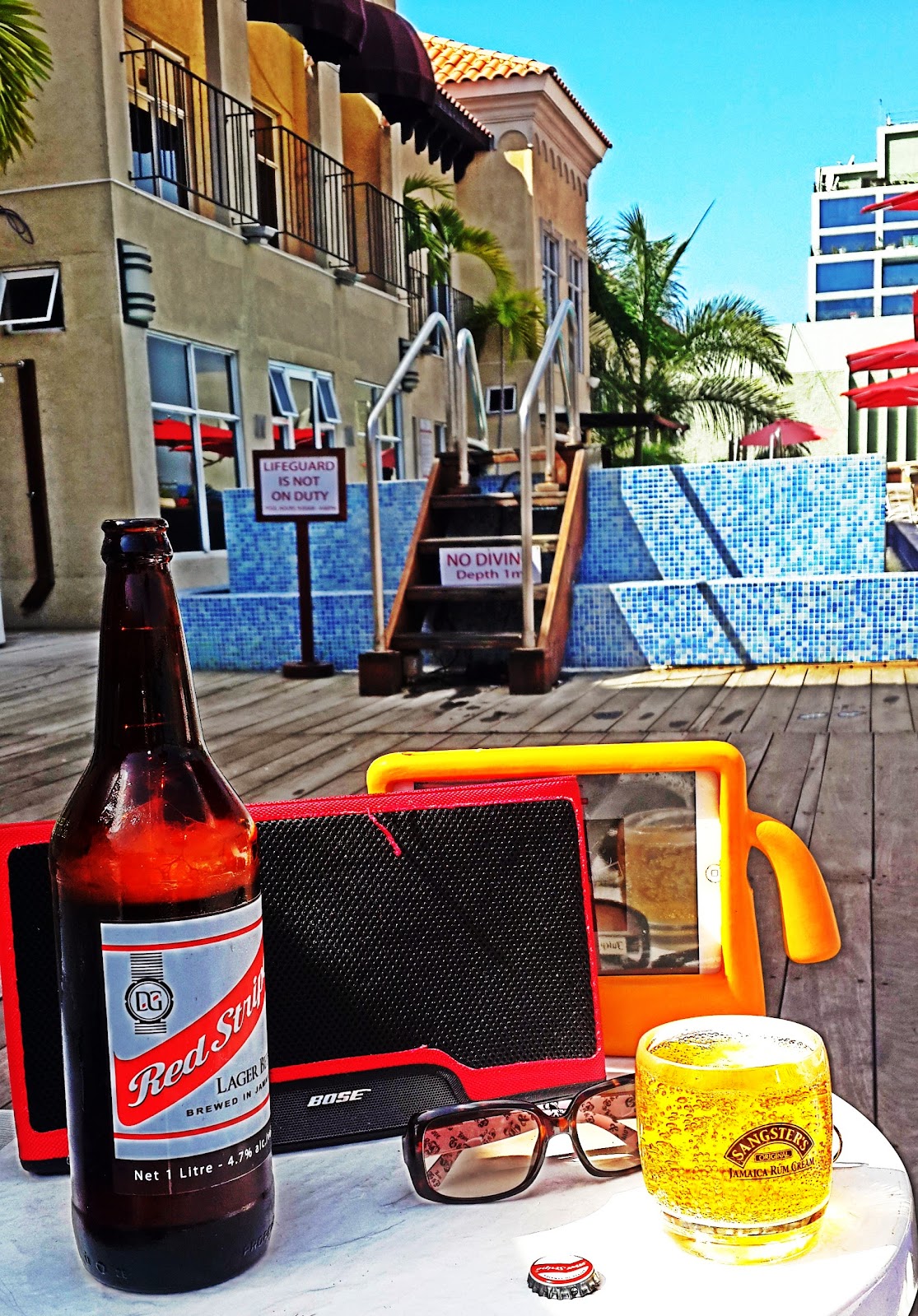 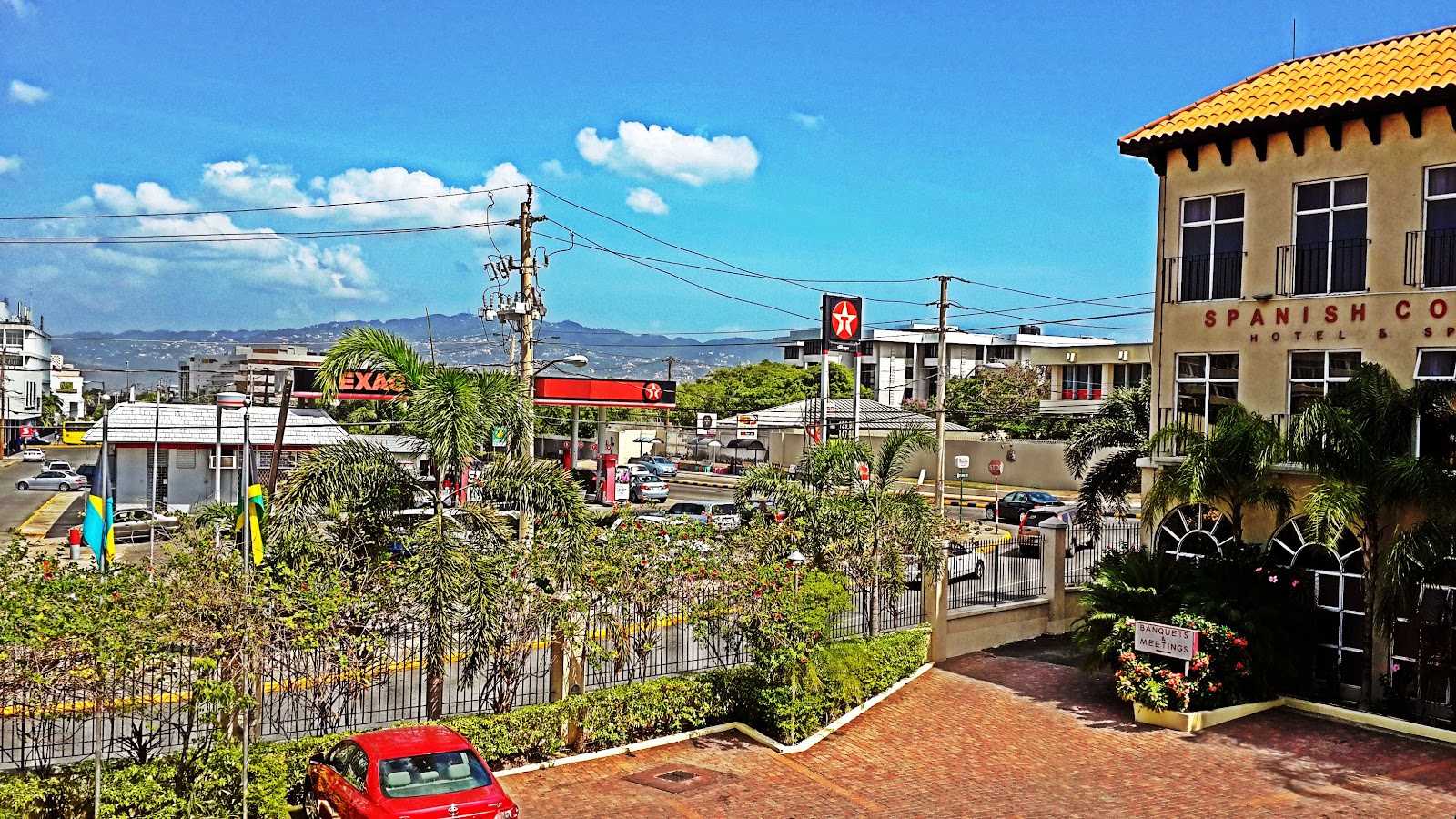 Another successful carnival to ward off my tabanca.  So I shall now leave you with the recap video.  See ya next year!


If you ever decide to hit up JA carnival  www. LehWeGo.com is where you are going to find centralized information.
By AngelaPanama at May 09, 2014