﻿
I told myself that I wasn’t crossing the stage this year (Keep in mind that I like to lie to myself). It’s just too dayym exhausting!!!  You have to dance hard as hell, in the blazing sun for a whole song… Please tell me why or how I managed to cross the stage 5 times this year???  I crossed with Tribe, Bliss & Paparazzi on Monday and just Tribe & Bliss on Tuesday!!!


Trinidad carnival 2014 was phenomenal, amazing, mind blowing, life changing, HOT DAYYM!!!  It was absolutely nothing like my first Trinidad carnival (2011 and I've come every year since).  I didn’t know anyone other than my homie Rocky my 1st year, now I know a good 20-30 people who either come down for carnival or live in Trinidad.  I got lost my first year and now I can maneuver the streets of POS like a pro.  I found the 3,000 - 5,000+ bands to be very intimidating my first year and now I find it extremely exciting. ﻿


My brother Paco & I did jouvert Monday morning so we were a lil sluggish getting started in the afternoon. We headed out to find our band around 1pm Monday and just happened to come across the Tribe/Bliss shuttles.  Apparently this was all in the paperwork they gave us, but they know dayym well brown people don’t like to read instructions!  We also didn’t pay attention to which shuttle we got on because Tribe & Bliss are usually always together.  We got dropped off at the Tribe location and PHUCKET, spent the morning with Tribe.  It was hotter than a mutha *beep*  so I chilled on the booze and just drank agua. We made it to the stage about two hours after linking with the band and the energy level was through the roof, I touched the stage and got a surge of energy from outta this world.  I was dancing all over the place, on any and everything.
﻿
﻿
﻿﻿Of course I managed to lose my brother during this madness and proceeded to spend the rest of the day solo!!!  I danced & had ah time by my dayym self.  I eventually decided that I wanted to spend the rest of the day with Bliss & ran into my homies in Yuma and my homie in Paparazzi along the way. In my first year, I would have abandoned my band rather than be on the road alone, but once again I said PHUCKET and kept on my mission to find my band.  I found Bliss and drank & danced with them till sunset.

﻿We went to bed nice & early Monday nite like good lil masqueraders and woke up around 4am to walk Rocky to her makeup appointment .  Paco and I didn’t hit the road until around 9am Tuesday.   Once again we managed to find Tribe first, but didn’t stay with them long.  We linked with Bliss at the all new Socadrome in just enough time to eat and get hydrated for the serious workout that was about to come.  Let me take a quick time out to discuss the new Socadrome.  It’s loved by some and hated by others.  I will say that last year the 3 hour wait to cross the Savannah stage killed my vibes.  Stayed in the same spot for hours drinking, I took a nap under a tree, walked to McDonalds to get some chicken nuggets and by the time we crossed the stage I was over Carnival Tuesday. This year we got to the Socadrome, did our thing and were on our way. I was loving it!!!  Ok so back to what I was saying, Bliss hit the stage and I once again I got a surge of energy from out of this world. 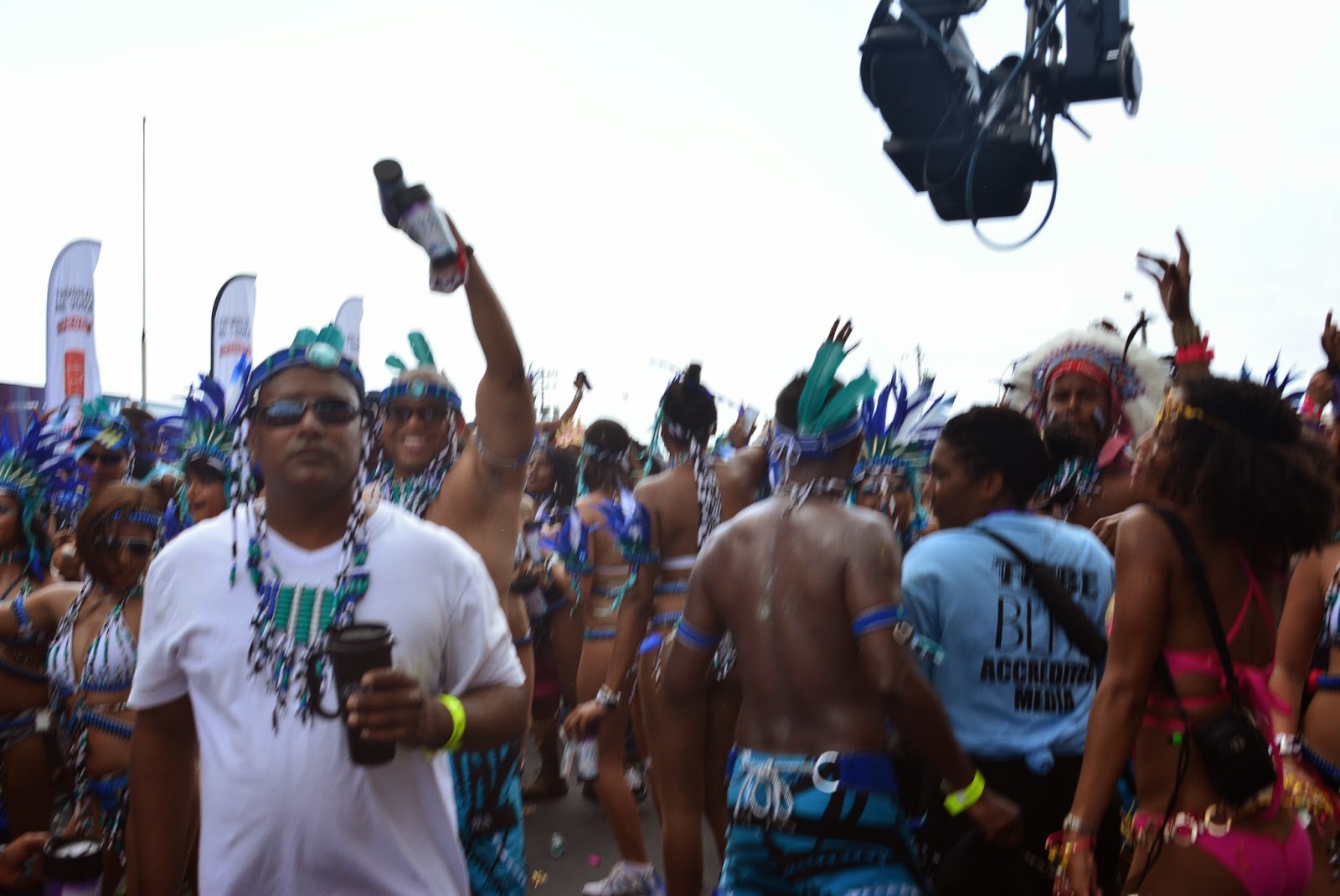 I decided to have some champagne to celebrate crossing the stage and we sat in the bleachers and watched the other sections cross.  Tribe was behind us so I had to stay and watch those crazy mofos cross.  As fun as Bliss is, Tribe is 10x fun’er.  Tribe was crossing the stage and people from previous sections keep running back on stage to dance with the other sections. Next thing I know I am on stage dancing with the various Tribe sections my dayym self and can I say is, "IT WAS AWESOME!!!!!!!"   Ok, so a good 2 hours after reaching the Socadrome we leave and link back up with Bliss to drink and be merry until lunch time.  Since my homie Rocky lives along the parade route we decided to take a power nap at her house instead of in the blazing sun since lunch lasts about 1 ½ hours.  We rejoined the band around 4pm feeling brand new, had a blast till carnival done at 7pm.  OH NO, we are not ready to say farewell. The vibes were so amazing, we could keep going for another several hours.  THANK GOD Tribe felt our pain and directed us to the Last Lap fete which lasted till midnight.  Bunji Garlin was shooting Truck On D Road video with Tribe all day and wrapped up the video shoot outside Last Lap.  I ran into so many homies that were with Bliss and Tribe at Last Lap.  The vibes were great, Anya was dancing in a tree,  the booze were flowing and music was splendid!
﻿
﻿
﻿


I can totally understand why people who have played mas with Tribe/Bliss in previous years get mad when they are unable to get in the band again.  This year being my 4th year on the road in Trinidad (can't compare other carnivals to Trinidad) I can say that my 2014 carnival experience blew all others out of the water.  I definitely have never had more fun and I just don’t know if it can ever be topped (and keep in mind I was by myself one day).  I shall smile as I relive the 2014 carnival memories in my mind!!!
Of course I must leave you with a video recap of carnival Monday & Tuesday