I’m sure I sound like a broken record when I say, “This carnival tops all carnivals… EVER!”  But I’m serious, it was amazing!!!  The trio of Rocky, Paco and Girly joined forces again for another Trinidad Carnival.  Rocky moved back to Trinidad and had an apartment by Queen’s Park Savannah so that made life easy frekkin breezy. Left Atlanta 6am on Wednesday, landed in Trinidad at 2pm and spent the afternoon picking up costumes and jouvert packages (I must admit that I took an hour power nap while they handled the 3rd pick up) .  Then we proceeded to link with other homies on the Ave and lime until 4am.  Hot dayym we had a time!!! 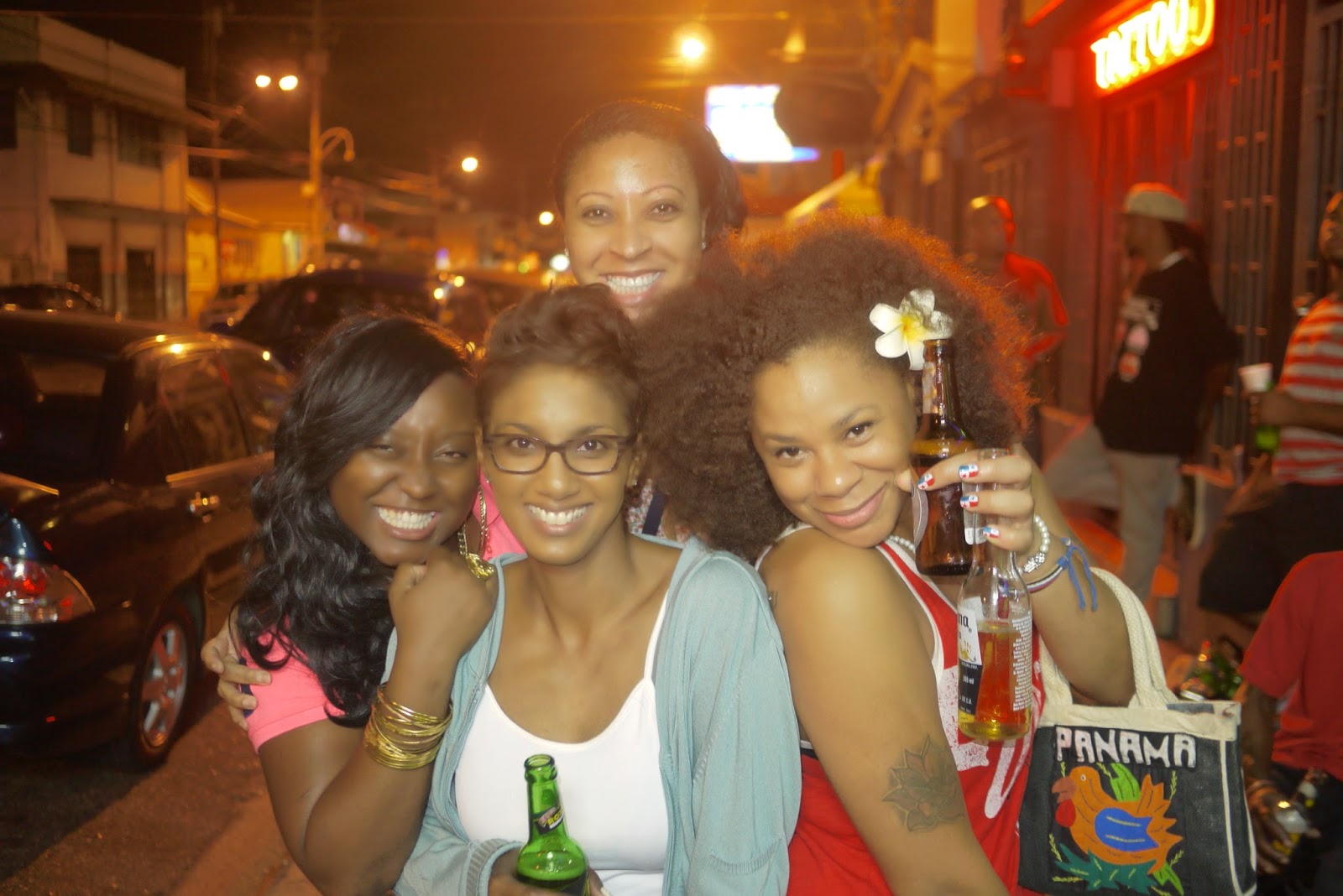 Thursday afternoon before we headed off to Cest La Vie, Paco and I were walking around trying to find an ATM that wasn’t out of cash.  We happened upon an Elementary School that had a full fledge fete going on.  The kids were in costumes and dancing around in the blazing heat like their adult parents and 5Star Akil was performing my jam “To Meh Heart”  if it wasn’t for the fact that we had to hustle back I would have stayed there and partied with the kids for a couple hours.  The Cest La Vie fete did not disappoint.  I definitely drank my $125 worth of alcohol.  There was plenty food options, but that’s honestly that last thing I care about at fetes.  Gimme rum, champagne and alcohol ice cream pops… and keep em coming!!!  Of course afterwards we hit the Ave but things went downhill about an hour after we got there.  A few people had their alcohol catch up with them so we all headed home around midnight. 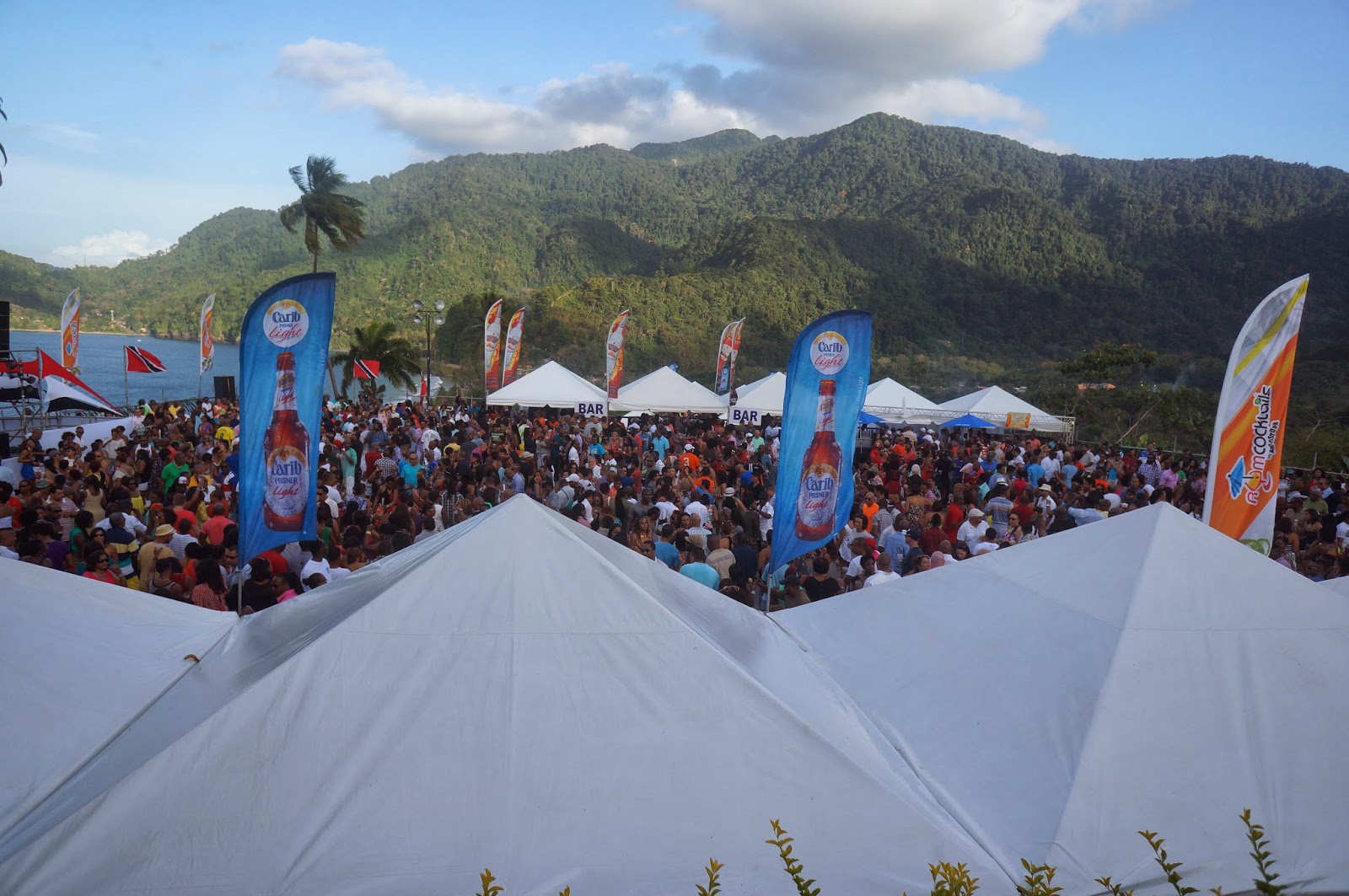 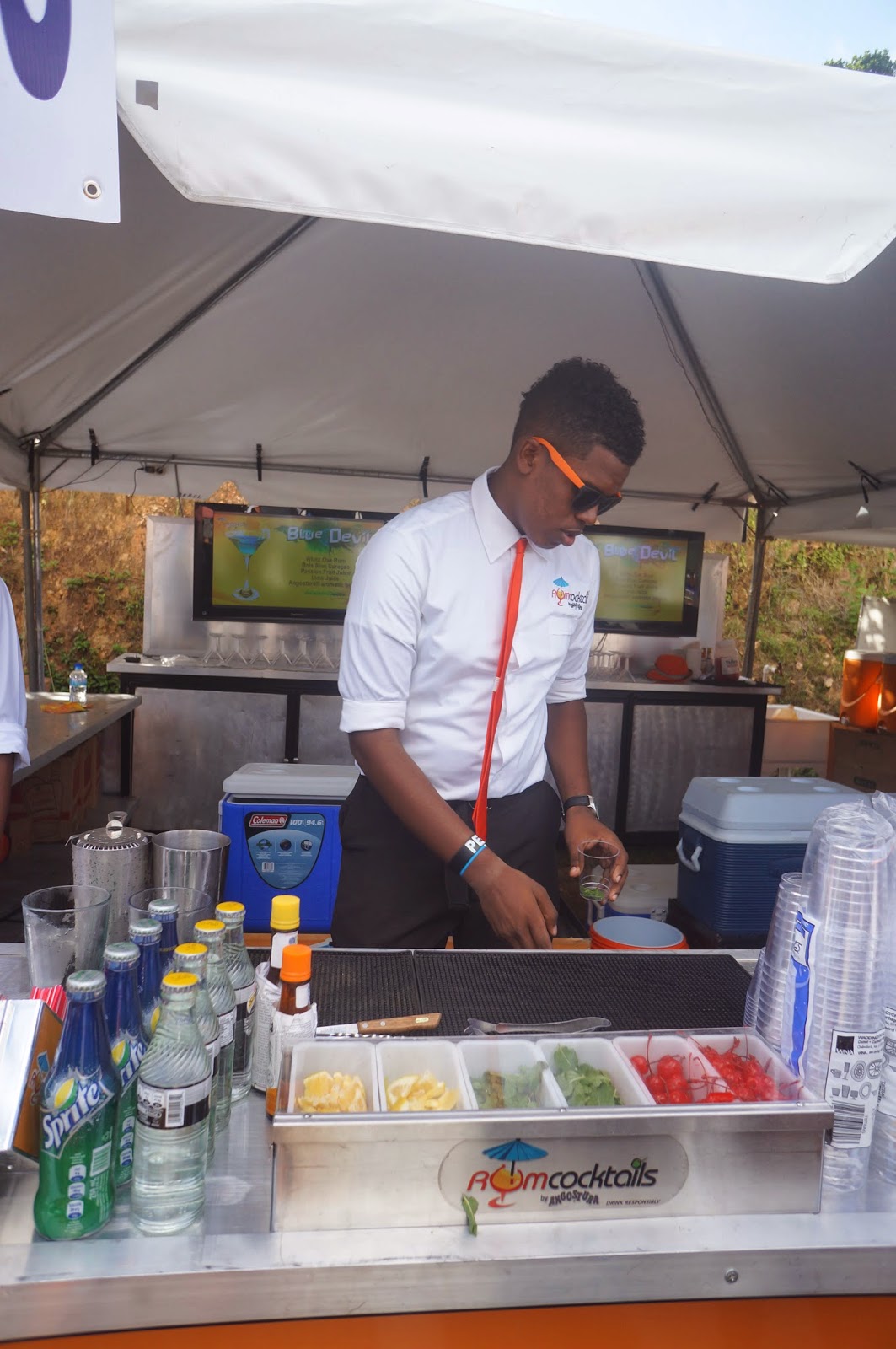 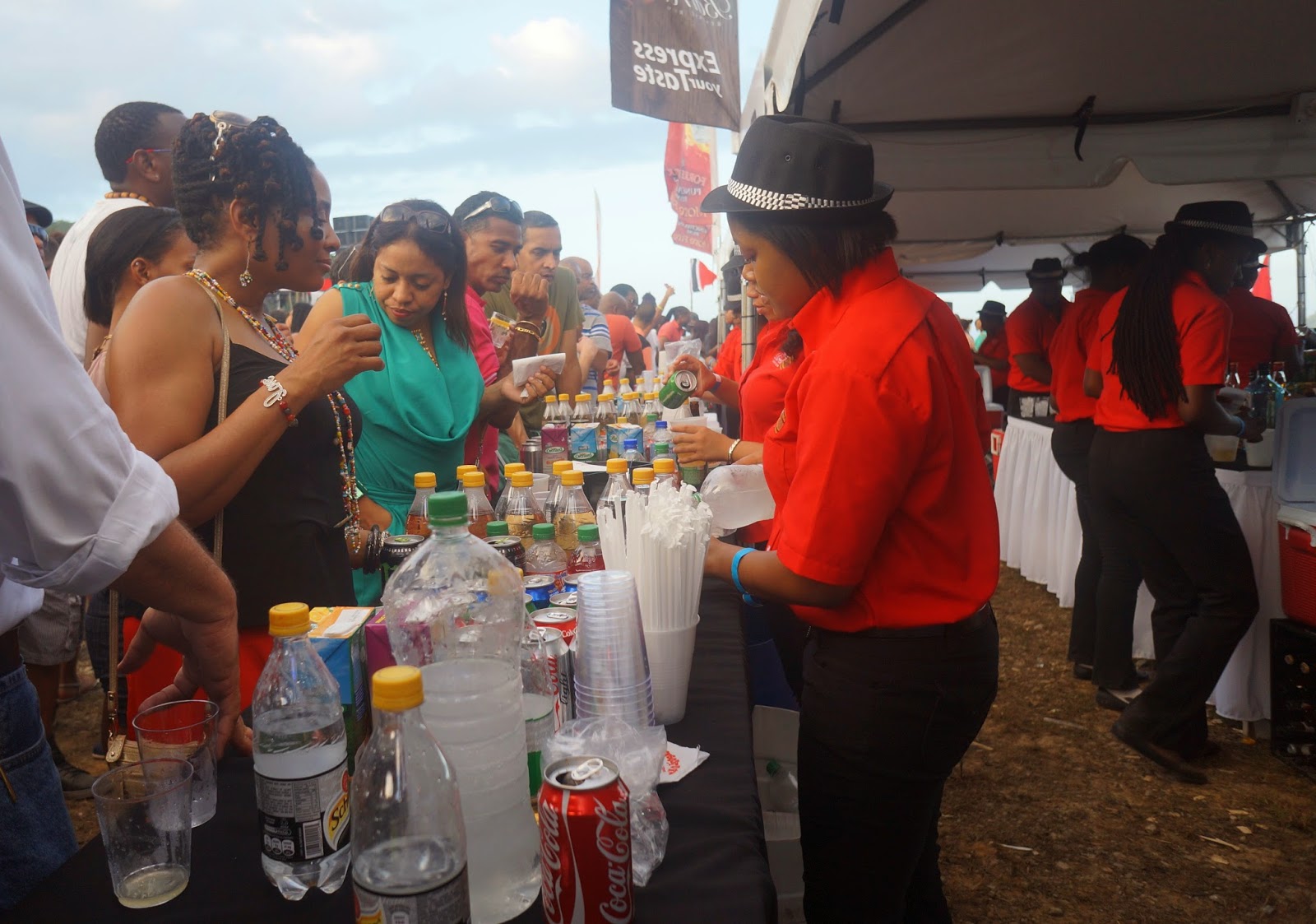 Friday afternoon was Frenzy boat ride.  The seas were kinda choppy that day, so I spent a good portion of the fete on the bottom level.  Private Ryan was supposed to come through as he always does for Frenzy events, but they said he ended up being double booked. FROWNY FACE L  but I had no complaints about the DJ on board, we definitely  got wild and crazy on the dance floor and some of the pix we saw afterwards had to be destroyed! 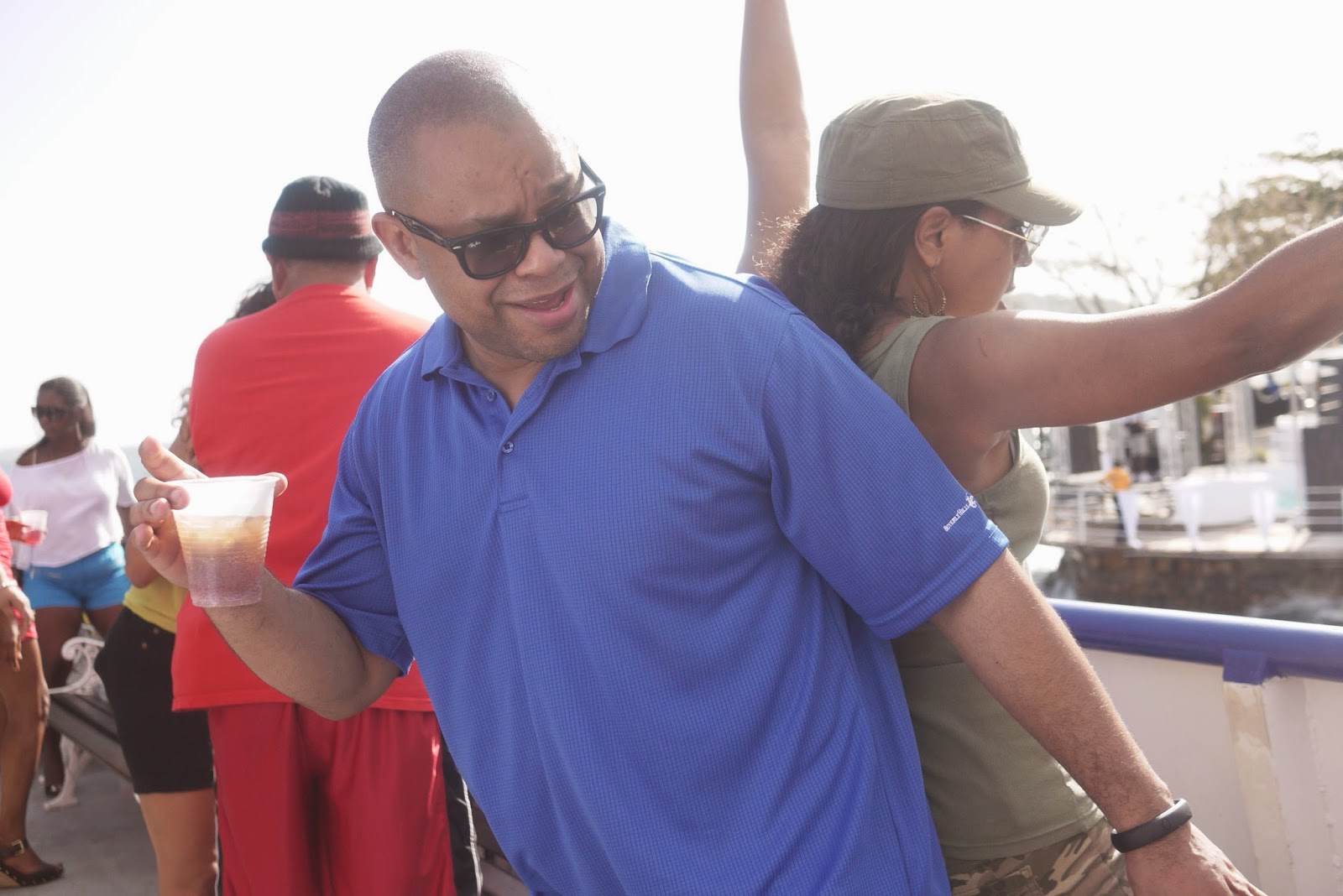 We were supposed to go to Soca Monarch Friday night, but we decided to chill since we had Caesar’s Army A.M.Bush 3am Saturday.  A.M.Bush is everyone’s favorite event.  I soooo look forward to being able to fete with Caesar’s Army at Jamaica, Barbados and Miami carnivals later in the year.  Anywho, I don’t really need to explain how sh*t goes down with Caesar’s Army, you should already know by now if not the pix and video say it all.  Madness to the 10th power PLUS a lil more!!! 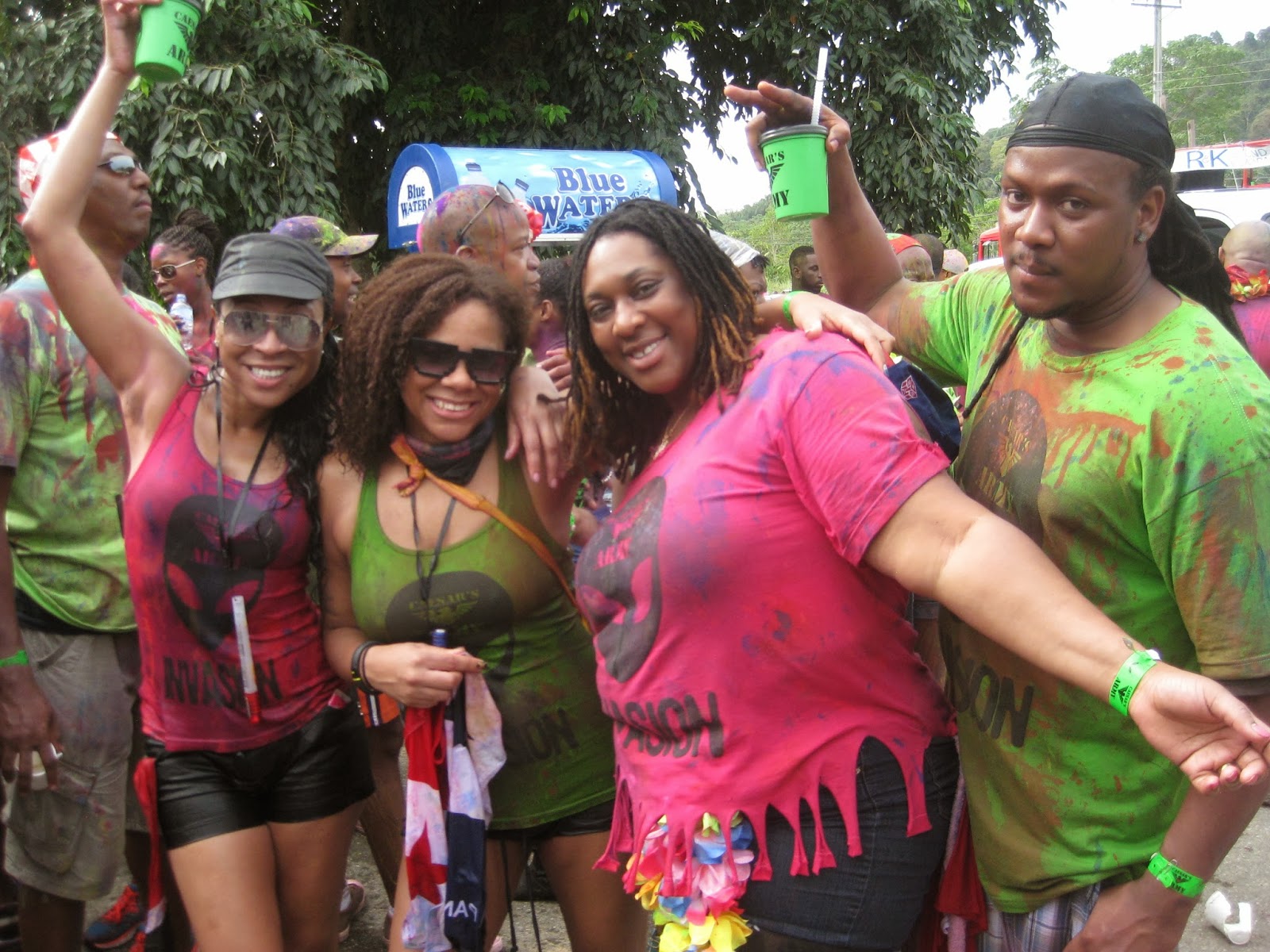 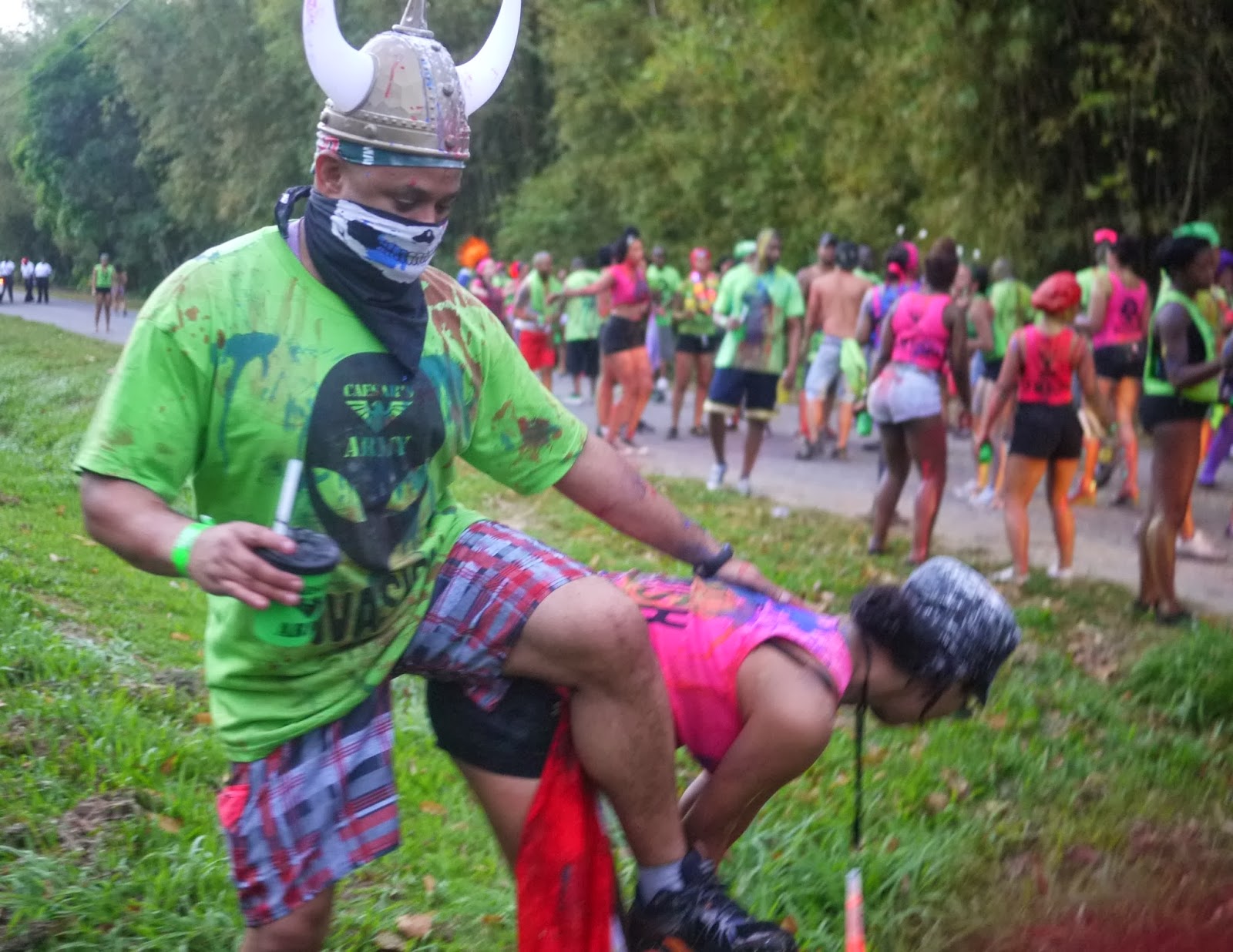 Wrapped up with Caesar’s Army around 9am and we were exhausted, time to sleep right??? WRONG!!! Kiddies Carnival was going down and when you tried to lay down the vibrations from the Bose Sound in the passing music trucks actually shook your body. So we just chilled on the patio till it wrapped up around 2pm. It was an amazing site to see all the tiny masqueraders, just melted my heart.

Saturday night was the Utopia fete, that was supposed to be low key vibes so that we could go hard at Shades Breakfast fete in the morning.  Some of us (mainly me) ended up going HARD in the Paint!!!  I had a dayym good time even though we went super early before most others arrived.  I drank, drank, drank, drank and once again got my $$$  worth.  The food looked so good I couldn’t help but to sample a lil.  Dei Musicale was on the 1’s and 2’s so everyone was dancing their life away.  Left Utopia around 1am (maybe not the best idea) 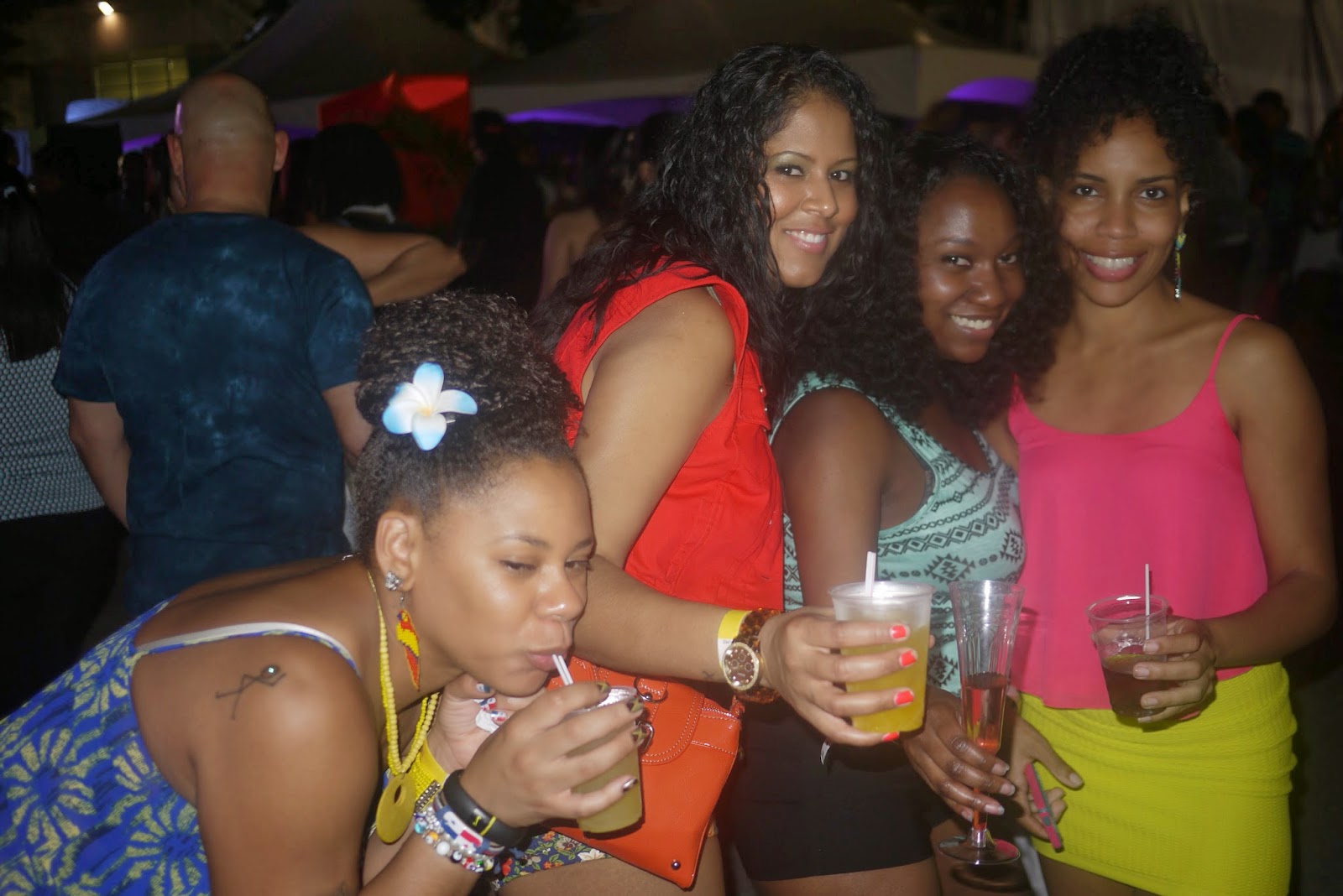 ﻿
Woke up at 4am for Shades Breakfast fete, if the venue wasn’t so far I would have been like “F*ck this sh*t, I’ll catch y’all in a couple hours.”  I was pretty useless at Shades. I enjoyed myself for a few hours and then I turned into a mindless zombie (repeat of Shades 2012).  The Shades venue is so beautiful, but I do  miss the pool from the Shades 2011 venue (Misty Ridge).  The grassy area became Vagrant Corner and I quickly became a vagrant that wanted nothing more to do with the fete, I did however wake up to partake in yummy Puncheon Rum lollipops & watch Benji perform cause I luvs luvs luvs Benji.  Crazy ass Mr. Killa performed and you know that was quite entertaining.   Mr. Killa and his crazy dance moves had us acting a fool all week trying to replicate his performances.  SMH!!!  I left Shades feelin brand frekkin new from my power nap!!! All I need in life is a patch of grass and some shade and I am good to go!!! 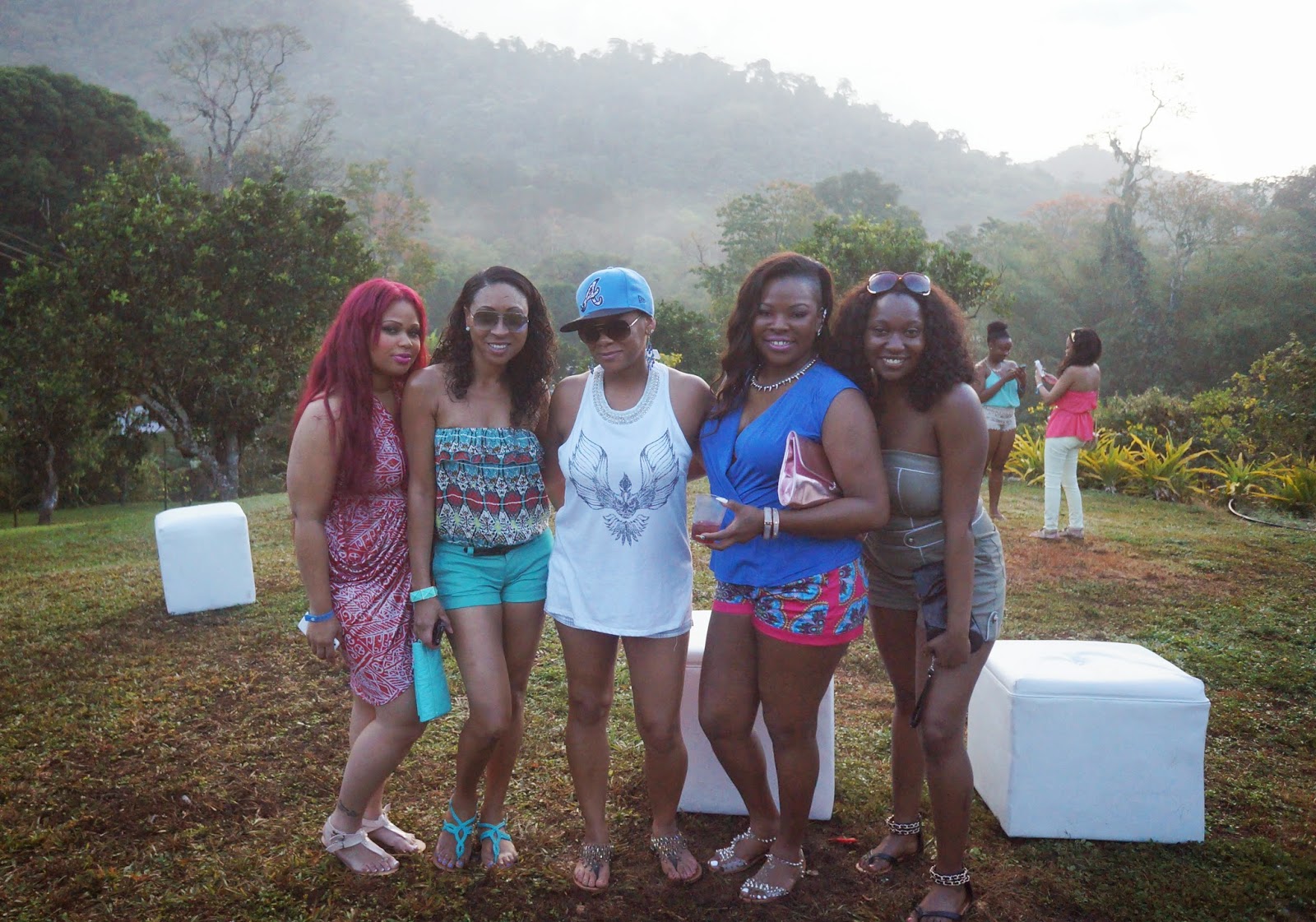 While Paco & Rocky napped, I walked over to the Hilton to chillax with the girls in the pool for a few hours, then captured this amazing shot on the walk back.  It hit me, Ive been partyin like a Soca Star all week but in a couple hours SH*T IS ABOUT TO GET REAL!!!  I went to bed around 7pm Sunday to get fully rested for Jouvert Morning. 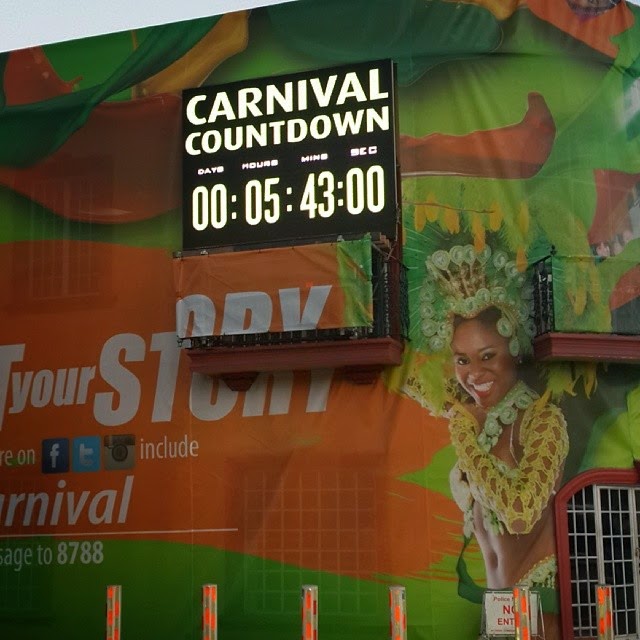 2am Monday arrives!  The day I have been waiting all year for.  Before partaking in Monday Mas, we gots to get DUTTY!!!  Walked over to the Dirty Dozen Jouvert mas camp for basically a rave before the jouvert road march started.  Rum, Foam, Paint, Powder, Fun Fun Fun Fun.  Now once the road march started … The beast let go!!!  I did have an incident with a vagrant, but its all good. I realized it was a vagrant dancing behind me about 15 seconds in but F*CK IT, its carnival you get another 10 seconds Mr. Vagrant!!! 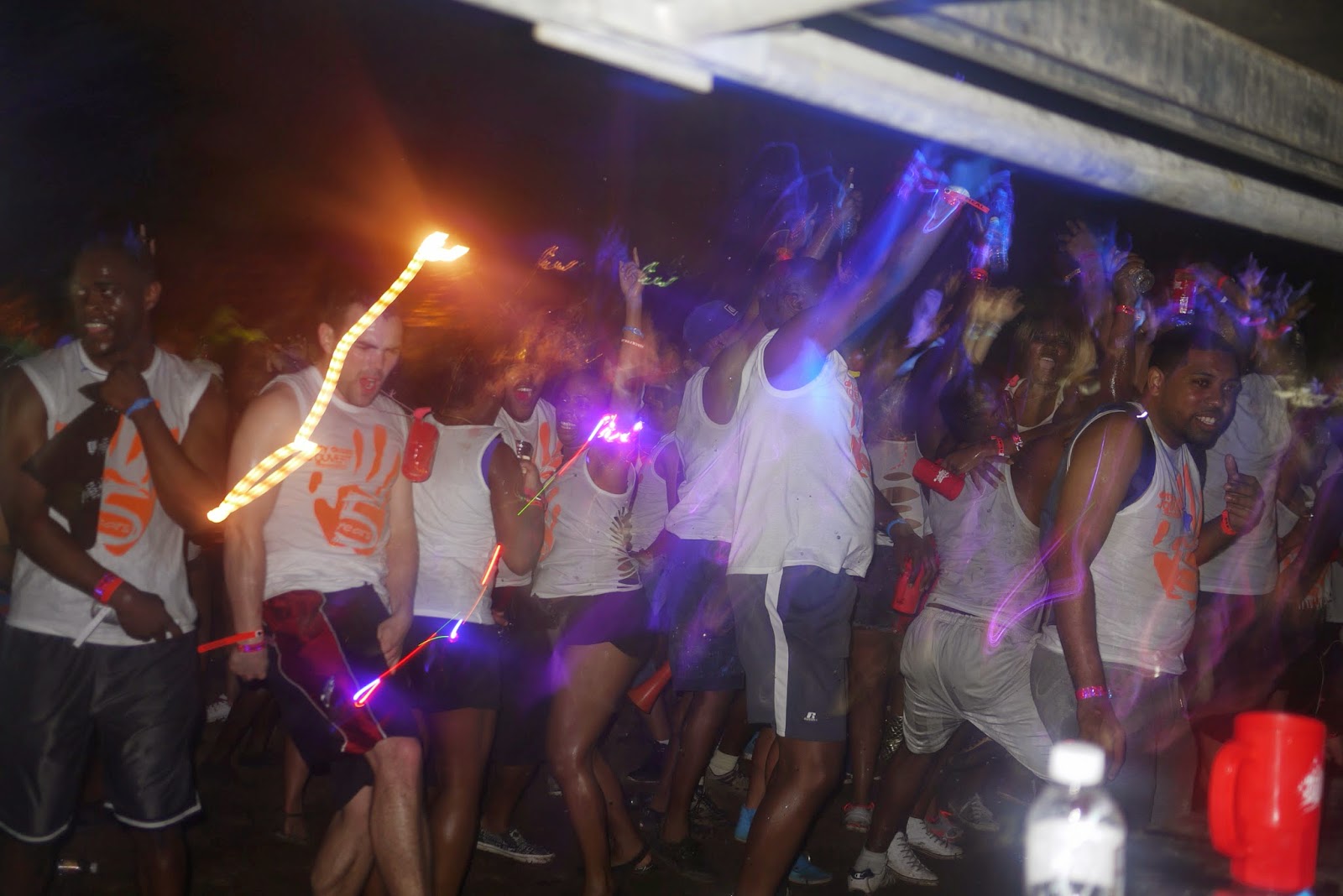 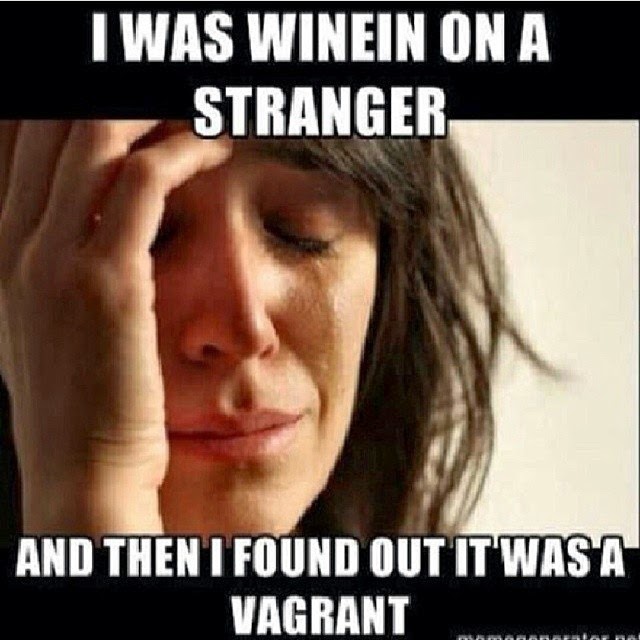 Danced around the streets of Port of Spain like kiddies throwing paint and powder on each other and dancing on any and everything!!!  We left the band around 7am cause we had to power nap before Monday Mas, but the band kept going till around 10am and then had an after party/wet fete at the mas camp.


This was by far my best carnival to date!!! The memories shall stay with me forever!