My homie Amber hit me up and was like, "Lets take the kids to The Bahamas (Nassau)!!!"  to know me is to know I'm game for almost anything (scary things like haunted houses, scary movies, etc excluded).  It was awesome, she handled all the logistics. I love trips like that, just like my upcoming trip to Trinidad with my homie Raquel... just tell me how much to pay, when to pay it and when/where to show up.

By far, the best part of the trip was our boating excursion to the Exumas islands & cays.  50 min speed boat ride from Nassau to Allan’s Cay to feed iguanas.  The kids were feeding iguanas grapes on a stick., those lil things came from everywhere to get themselves some grapes. 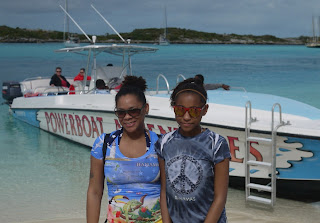 We spent the rest of the afternoon on Ship Channel Cay.  Open bar all day long, they won my heart with that! They wrangled sharks & we got to feed sting rays. BTW I’m convinced that a string ray tried to bite my finger off even though they claim Sting Ray don’t have teeth.  Some of the group went snorkeling, but after seeing all those sting rays and sharks I decided to Chiiiiiiillll!!!  I didnt wanna end up on a Vacation Disaster show, instead I climbed rocks in a bikini & with a rum runner in my hand!!! LMFAO  The lunch they had was amazing, I rarely eat fish, but I went back for 2nds. After that I got the itis and took a long juicy nap on the beach.  Followed by a walk in the bush where the guide gave us all shots of Bacardi (my favorite). If you are ever in the Bahamas, you should look these guys up.
http://www.powerboatadventures.com/ 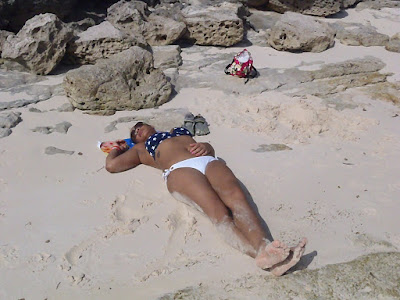 My daughter & I took a took a tour of the Nassau.  We got to see The Queen’s staircase (below).  Built by slaves & named to honor Queen Victoria who helped in the abolition of slavery in the Bahamas.  A few feet away was Fort Fincastle which overlooks the city. 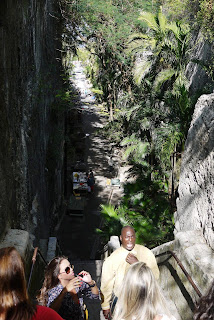 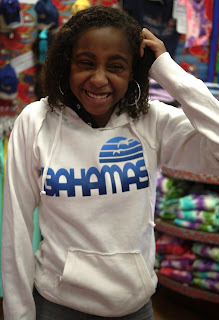 All four of us went to the Pirates of Nassau Museum (which ended up being a mild haunted house).  Some of the rooms were completely dark & others were just plain spooky.  I’m not gonna say I’m SCARED of the dark, but I’m just not too fond of it.  So the kids and I all coward behind Amber. 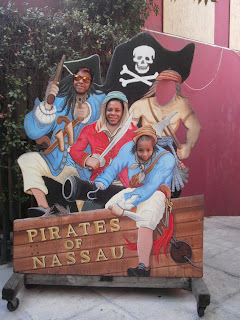 After 3 days of asking, my daughter convinced me to rent a scooter.  Driving on the left side of the road, while wearing a dress was NO BUENO!!!  I really am one scary MOFO, I can't believe I did it... the things we do to make our loved ones happy!!!  I think I said the Lords Prayer in my head the entire time.  I might have even sang the chorus to Kanye West ~ Jesus Walks a few times as well.  Its amazing how certain situations make us Ultra Religious!!!  Even though we rented it for a few hours, I took it back after 1 1/2 hours cause I was on the verge of having a heart attack. 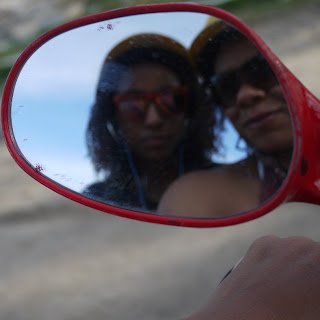 I brought my Bose speaker with me so we had a soca party on the beach a couple of nites.  I'm lost without my chunes!!! 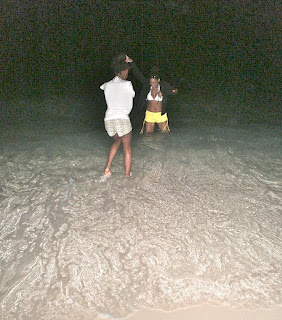 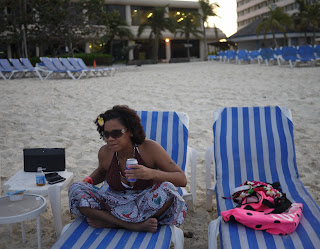 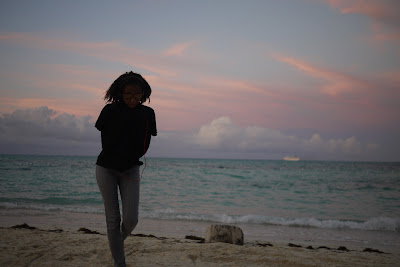 Because I tend to go CRAZY with the camera I had WAY too many pix to post, so instead I made a nice likkle video for your viewing pleasure!
By AngelaPanama at January 25, 2012